Graphic novels are wonderfully suited to chronicle the lives and times of artists, designers, architects, and even creative institutions.

Comfort food for our imaginations, graphic novels evolved from the intersection of adventure comic strips, ’60s alternative comics, and illustrated children’s books. They usually tell their stories through a succession of chronological or sequential images that range in style from realistic to fantastic. Also, they easily cover just about every genre — nonfiction as well as fiction, biography and history, and even thematically linked short story formats.

Because many graphic novels are illustrator- or artist-driven, they often express a strong creative or personal perspective via a pictorial language that often elbows aside the written word. This makes the format wonderfully suited to chronicle the lives and times of artists, designers, architects, and even creative institutions.

Often meticulously prepared visual meals, the best artist- and art-oriented graphic novels are particularly delicious. Three recent examples of the format are worthy of special comment: a biography of the energetically contrarian Mexican artist/activist Diego Rivera, an insightful history of the Bauhaus, the Camelot of art and design schools, and a breathtaking journey through Jean-Michel Basquiat’s brief life. In each case, these graphic novels attest to the creative humanity of their subjects while being entertaining as well as educational. 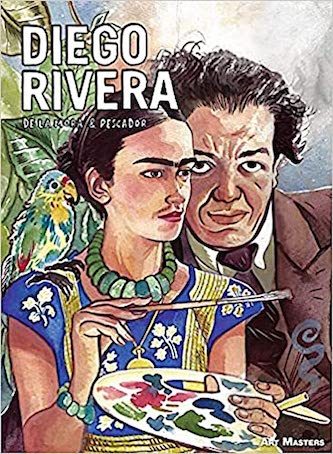 The author and illustrator explore the passions and political conflicts of an artist whose turbulent life channeled the volatile contradictions of Rivera’s revolutionary temperament and times. Part of early 20th century Parisian bohemia, which included Picasso, Modigliani, and Braque, he met Lenin in Paris, Stalin in Moscow, and offered refuge to Trotsky in Mexico. In an ironically parallel universe, Rivera was commissioned by mega-capitalists Henry Ford and John D. Rockefeller to paint gigantic murals. The narrative chronicles his creative gusto as well as his unbounded appetite for life, lovers, and his four wives — with the iconic artist Frida Kahlo as number 3. Their formidable partnership was one of the great love stories of art history.

The authors pick and choose various biographical details, sometimes missing important strands. One regrettable omission: they make little of Rivera’s Jewishness on his mother’s side. Supposedly, her family had a converso background (ancestors who were forced to convert to Catholicism). This was a legacy of oppression that no doubt informed Rivera’s radical art and politics. That aside, this superb visual story clearly portrays the myth and the man.

For artists, designers, and architects, the Bauhaus was (and remains) a place both mythical and more than a little magical, as much about the power of inspiration as it is about achievement. Some of the institution’s still vibrant aura of promise wafts through this terrific book. 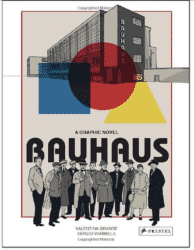 Cleverly, the protagonist of this graphic novel is not a person but an idea — the institution itself. Founded shortly after World War I in Germany, the Bauhaus was the most famous and influential avant-garde art and design school in the 20th century. Its artists, architects, designers, craftspersons, and students generated an ambitious and influential conversation about the nature of art and design. Over the course of its relatively short 14-year history, Bauhaus was at first located in Weimar, then moved to Dessau, and finally Berlin. Its visionary philosophy sought to unify art, craft, and technology. Its goal was to rethink and restructure the elemental forms of contemporary life. In the process, Bauhaus emerged as the fundamental reference point for virtually every avant-garde artistic movement that followed.

This enthralling tome is full of visually arresting illustrations and engaging texts that place the novel’s hero (Bauhaus) squarely in the middle of the 20th-century debate on the relationship between technology and culture.

Divided into three sections that trace the evolution of the Bauhaus as its center moved across Germany, the narrative shows how the school responded to the era’s economic, political, and intellectual challenges. Sergio Varbella’s inventive drawings illustrate the theories of founder Walter Gropius and those who followed him in leadership roles. Valentina Grande’s insightful script highlights crucial moments in the institution’s history and the lives of its principal figures, including Klee, Kandinsky, Albers, and Mies van der Rohe. The result is a great introduction to a seminal chapter in the development of design. Bauhaus was far from perfect — it was never as collaborative as its mission stated, the majority of the school’s faculty were misogynistic, and the only female members of the faculty were in the Textile Studio. However, this novel shows how, at its best, the Bauhaus school broke down barriers, embracing creative ideals that are still applied today. 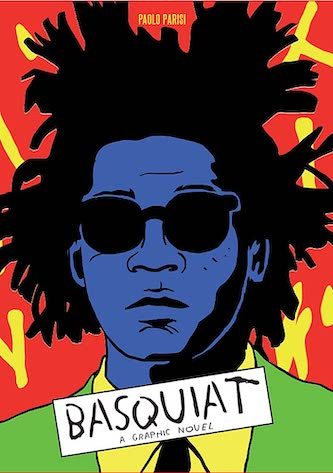 This book portrays “the Radiant Child” Basquiat exemplified for many during the late ’70s and ’80s. Celebrated as cool, imaginative, and rule-breaking, Jean–Michel Basquiat embodied a fascinating mixture of talent, luck, charm, and chutzpah. This graphic novel takes you on Basquiat’s rapid journey from street art graffiti legend SAMO to an international art world darling to his sudden tragic death. Depicted through cinematic pictorials that are inspired by Basquiat’s own aesthetic, this is the artist as seen by those who knew him — his father, sometime girlfriend, gallerists, and himself. Not formally educated or art school–trained, the New York City-centric Basquiat was a true artistic original.

Playfully using primary and secondary colors, this superb graphic chronicle showcases a flawed artist’s life, exploring both the art and the nature of the man who by most measures made it. Parisi’s deft approach here includes drawing on facsimile pages from the artist’s notebooks. Basquiat’s own words are used to tell his story. Using an at times nonlinear structure, this book touchingly documents the artist’s childhood and examines his personal struggles, substance abuse, and meteoric rise to a level of celebrity for which he had little to no preparation. He was a short-lived creative phenomenon who came to define the NYC art scene of the period. Basquiat: A Graphic Novel makes a frenetic but dazzling case that Basquiat should be considered one of the great artists of the 20th century. The volume’s compelling graphics mirror the subject’s unique aesthetic to tell his singular story.

An urban designer and public artist, Mark Favermann has been deeply involved in branding, enhancing, and making more accessible parts of cities, sports venues, and key institutions. Also an award-winning public artist, he creates functional public art as civic design. The designer of the renovated Coolidge Corner Theatre, he is design consultant to the Massachusetts Downtown Initiative Program and, since 2002, he has been a design consultant to the Red Sox. Writing about urbanism, architecture, design and fine arts, Mark is associate editor of Arts Fuse.