With gentle humor and insight, Lea Ypi draws rich portraits of the three caring adults she grew up with in the authoritarian world of her childhood in Albania. 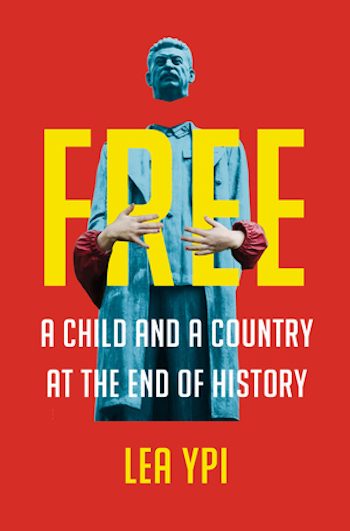 What’s it like to discover that pretty much everything you’d grown up believing about your country was government propaganda that your parents had only pretended to believe? In Free, Lea Ypi vividly recounts her childhood in Albania during and after the communist rule of Enver Hoxha, or Uncle Enver, as he was known back then. The memoir won this year’s Royal Society of Literature’s Ondaatje prize, an award given to books that “best evoke the spirit of a place.”

With gentle humor and insight, Ypi draws rich portraits of the three caring adults she grew up with: her asthmatic father, headstrong mother, and stylish, French-speaking grandmother. When they don’t shed tears over Uncle Enver passing, she accuses them — more out of personal disappointment than patriotic fervor — that they didn’t really love Uncle Enver. Don’t say that, they nervously tell her.

For any observant child making sense of the adult world is a challenge; the author’s attempts were complicated by additional layers of mystery. Why did one of her relatives take so long to graduate from “the university?” It turns out that his prison sentence for subversion was longer than most. Why are there many religions when, as Teacher Nora explains, “God” doesn’t even exist? Why did her parents whisper about a man who shouted something out the window of a government building that used to be a mosque? Her father, irritated that she insists on an answer, finally responds. “Allahu akbar” is what people of Muslim faith used to say. “Do we know any people who were Muslim in the olden days?” she asks them. Her mother replies, “We are Muslim.” Her father points out that they were Muslim, like most of the population.

Once part of the Ottoman Empire and semi-feudal, Albania was invaded by Italy during WWII. Enver Hoxha, a former school teacher, resisted the fascists, founded the Albanian Communist Party, and rose to power after the war. His government appropriated land to form collectives, brought electricity to the villages, and promoted literacy. Insisting on Albania’s sovereignty, he pulled away from the USSR. Over the years the country became remarkably self-sufficient and cut off from the world. Ypi didn’t know any different, so she accepted one-party rule and stood uncomplaining in long lines to buy generic products that weren’t always in stock. Nor did it seem strange that certain hairstyles, nail polish colors, or articles of clothing, like trench coats, were considered foreign and unacceptable.

The state controlled all media. In school they read Richard Wright’s Black Boy and learned that life under capitalism was harsh, “as removed as a dystopian novel.”

Still, Ypi catches glimpses of the outside world when her father adjusts the rooftop TV antenna. And at the beach, where, across the trench separating them, Ypi and her friends saw tourist children playing with toys “made out of plastic material we had no word for.”

In Ypi’s early adolescence this static, insular nation made a great leap into the unknown of free-market capitalism. The Soviet Union was breaking up and in 1989 the Berlin wall came down. A new, democratic system was instituted in Albania; her parents could openly admit they didn’t love the Party and never had. Her mother, in fact, joins the newly formed opposition party. In the great upheaval, many people lose their jobs. Thousands leave the country, packing onto boats that don’t always make it safely across to Italy.

Ypi’s family kept what little they had saved over the years in the pocket of an old coat in the closet. Exposed to new ideas, new products, new ways of doing things, Albanians were at a disadvantage: they had no experience with global investments and fell prey to a pyramid scheme that plunged the shaky economy into a financial crisis. Violence broke out and NATO troops were  called in to quell weeks of civil unrest. Socialism had failed the people, but capitalism was “booby-trapped.”

An orphan on the doorstep of the international community, Albania was consigned to the World Bank. The institution sends Vincent, nicknamed the Crocodile by the locals because of the little insignia on the Lacoste polo shirts he always wears. Ypi’s father practices his English with Vincent, who rents a place in the neighborhood. In an odd way, he reminds the author of Teacher Nora. Although they had completely different worldviews, the World Bank man and her instructor tend to see things in broad strokes, fitting particulars into their paradigm.

After Ypi’s father loses his government-assigned job in forest management, he sits around depressed, watching TV. Accepting an upper-level job at the port, he’s soon on the front lines of the World Bank’s strategy of “shock therapy” for economies charged with repaying debt — he is caught in the vice of the new system he had welcomed. He finds himself in the painful position of having to fire people, his success as a boss is pitted against the livelihoods of the dock workers. Of Ypi’s parents, he is the worrier, the more tender. The differences between them become increasingly distinct: Ypi father’s optimistic view of human nature vs that of her mother, who is less trusting of any form of state control.

In the midst of all this, Ypi’s about to go off to college. Her father is alarmed to hear she plans to study philosophy. Though he can quote Marx, (the point is not to interpret the world but to change it) he asks that she stay away from Communism. She goes to Italy, sailing “over thousands of drowned bodies,” the corpses of her countrymen who didn’t make it.

Her leftist university friends talk about socialism, telling her that Albania, Cuba, China were never truly socialist. For these student dreamers, a better economic system has yet to be realized. For Ypi, these kinds of illusions are her past. She’s lived it. “People never make history under circumstances they choose,” she concludes.  The ideal conditions or, maybe more to the point, the ideal people, are never likely to be on hand.

As for socialism in Albania, people were deprived of consumer goods, but while waiting in lines outside the store locals talked to each other. Life was more sociable; neighbors were in and out of each other’s houses and looked out for each other. There was sharing, a sense of community and common purpose. That security was comforting:“Five years after the fall…It didn’t matter if the memories were absurd, hilarious, or painful, or all of these at once. We would joke about them over meals, like drunken sailors who had survived a shipwreck and relished showing one another the scars.”

Freedom can mean freedom from the undesirable, such as hunger, homelessness, unemployment. Or it can mean the freedom to speak freely, uncensored media, and the potential to obtain (provided you have the cash) whatever you want. Ypi now lives in London, a professor of political theory at the London School of Economics and an adjunct professor in philosophy at the Australian National University. She has experienced both varieties of freedom and grappled with the good and the bad in different political systems. She doesn’t advocate for one or the other in this compelling journey back into the authoritarian world of her childhood.

Monica Hileman’s stories have appeared in journals such as Arts & Letters, The Baffler, the Chicago Tribune’s Printers Row Journal, and Catamaran Literary Reader, among others. She currently lives just north of Boston.