You are here: Home / Books / Author Interview: Steve Almond Reveals “All the Secrets of the World”

An interview with debut novelist (at last!) Steve Almond.

Long a presence on the local and national literary scenes, Steve Almond is an extraordinarily versatile writer with two best sellers to his name, Candyfreak and Against Football. For four years, he served as the co-host of the New York Times Dear Sugars podcast with Cheryl Strayed. He’s published three collections of short stories, many of which have been anthologized in Best American Short Stories, Best American Mysteries, and Best American Erotica.

But despite considerable effort, he has never published a novel. Until now. All the Secrets of the World is a sprawling epic set in his native California, at the dawn of the Reagan era. The book is being hailed as a “breathtaking success” and has been optioned for television by 20th Century Fox.

This Monday evening, May 2, Almond will launch the book at the new Grub Street headquarters before moving on to a national tour.

Chris Walsh talked to him over Zoom about the book’s wild plot, why Nancy Reagan makes a cameo, and the unexpected pathos of scorpions.

The Arts Fuse: In your 30 years as a writer, you’ve put out 12 books, and even co-authored a novel. But All the Secrets of the World is your first published solo novel. Why did it take so long? What helped you break through?

Steve Almond: It took a long time because I was busy writing bad novels in which I conceived of some me-like character who sat around passively observing the world. It turns out that’s not super interesting to read — or write, actually. It turns out I needed an actual character to love who wasn’t me. That’s Lorena, the young heroine of All the Secrets of the World. What I also needed was — wait for it — an actual plot: a set of events by which the characters are made unhappy or the reverse, and also a chain of consequences, so that the scenes were escalating tension and instigating further action.

What might also have helped me complete the novel is that I had essentially given up on the idea of writing a novel. Something in that process of saying, Okay, you don’t have to do it; your ego doesn’t have to point a gun at your head and say, “write a novel or else,” somehow freed me up to simply be curious about these characters. First Lorena and then the other characters that she comes into contact with.

AF: She does indeed come into contact with many others — her frenemy Jenny Stallworth; Jenny’s real estate agent mother; her scorpiologist father. Police officers. And there are the folks she doesn’t come into direct contact with, but who affect her life — policemen and FBI agents, even Nancy Reagan.

Almond: Yup. Her constellation keeps expanding. The book becomes a social novel. That is: it’s interested in the larger systems within which individuals operate. Given my obsession with politics, that’s no surprise. But it was a shock to discover that I was writing what amounts to a thriller — a thriller with a conscience, I guess. It turns out I needed a really propulsive plot. Otherwise, I would have devolved to my old tricks of trying to push around the language and prove how witty I am. It turns out the reader really wants story. It took me a long time to figure that out, but there was a lot of story waiting for me.

AF: What do you mean by that? 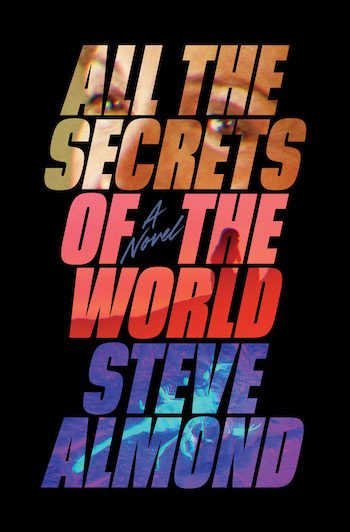 Almond: The way books get written is that there are all these memories and events that kind of haunt you. But they’re lodged in your subconscious. And in the process of writing a novel, this stuff gets sucked out of your subconscious. So, for instance, when I was Lorena’s age, I had a friend whose dad got abducted. His jeep was found out in the desert, with blood and signs of a struggle. That memory stuck around for a long time in my head. Another example: when I was 22 years old, as a young reporter in El Paso, I followed a couple of scorpiologists out into the desert, and they revealed to me the hidden world of scorpions, using an ultraviolet lamp. That stayed with me, too. Then I went to Miami to be an investigative journalist and I wrote a series about the case of the Bird Road Rapist, a guy who was essentially framed by the police because they needed to arrest somebody. All these memories haunted me and they eventually became parts of the novel.

AF: What about the political element, setting the book in California in 1981, when Reagan’s “morning in America” was dawning?

Almond: Well, I wrote the first half of this book before the 2016 election. Then I went crazy, as did the rest of the country. I spent a couple of years writing nonfiction, because the country felt like such a dumpster fire. When I returned to Secrets, in 2018, I could see that the direction the book was headed made perfect sense. It was an examination of our immigration policy, and how America has criminalized the American dream. And that was playing out on our TV screens every night. Our government was literally ripping apart traumatized refugee families. Little kids were being taken from their parents. That invigorated my sense that, even though I was writing about the political landscape of 1981, I was actually writing about something that was happening in the present.

AF: You write from multiple points of view in the book, including women, Latinx characters, undocumented people, a gay black police officer. Are there risks in those decisions?

Almond: Absolutely. Especially as a person of extraordinary privilege — white, male, middle class. I’m writing about characters who are born into a much rougher story. So there’s this natural question: “If it’s important to give voice to the disenfranchised, shouldn’t the people who have lived those lives tell those stories?” The answer is definitely yes.

But there’s also the question of the novelist’s responsibility in all this. If I only write about my own experience as a white dude, then I’m choosing to center that narrative, which history has already done. The big decision you make as a writer is this: Whose life are you going to ask the reader to pay attention to? Whose inner life are you going to explore? Who matters? Who is worthy of your attention? For me, the answer was: Lorena, and her family.

If we only write about our own lived experience, then we all become representatives of our own experience. Which is fine — that’s a lot of what my writing has been. But the best writing is intended to enlarge our moral imagination, to cultivate a sense of empathy about every person who walks past us on the street, or who we imagine into being. What makes them tick? What is lodged in their history? What are they up against? What’s their margin for error?

That said, when you write from a place of privilege about characters who are disenfranchised, you had better do your best to honor their experience. If you don’t, you can rightly be accused of exploitation.

AF: How do you know if you’re doing them justice?

Almond: You don’t really. That’s for the reader to determine. All I can say is that I was just tremendously curious about all the characters in the book. The more I spent time with them, the more I wanted to understand their motives — even Nancy Reagan. I was all ready to flatten her out into this fashion-obsessed astrological ditz. But then I realized: wait a second, she was also a traumatized wife whose husband was almost killed, and she was frantic to keep him safe, so she doubled down on her astrology belief system because she felt it would keep her husband safe. In the book, she makes a bunch of naïve, misguided, reckless decisions that put Lorena and her family in danger. But both of those Nancys coexist. People are morally complex. And the best novels show us that. They lead readers into their own moral confusion by exploring the moral confusion of the characters. Not by saying, “Here are the villains and here are the victims.”

AF: That reminds me of a moment when Lorena wonders, “Was it possible two things could be true at once?” That duality prevails throughout the book. People are always using each other and getting used.

Almond: Yeah, everybody’s complicit, though of course some are more complicit, because they have more power than other characters. But even with the most morally troubling ones, whether it’s Nancy Reagan or Marcus Stallworth, there’s some set of events and experiences, traumatic or otherwise, that cause them to behave destructively. People are not just born saying, “Let me do evil.” For me, what felt most important was that I traveled deeper and deeper into the characters who were the most vulnerable, like Lorena’s brother, Tony, and her mother, Graciela. They were the ones with the most at risk.

I was also just ravenously curious to see what kind of trouble Lorena was going to get into and whether she was going to be able to survive it. The book wasn’t easy to write. But it was much easier than my failed novels because I loved Lorena so much, and she was such a brave and determined and fiercely intelligent person that I enjoyed seeing her stand up to the various forces, and men, aligned against her. That’s what Dickens proved over and over again in his novels: if you are born into a story where the odds are stacked against you, you have to be extraordinary in order to persevere.

AF: I wanted to ask about secrets, which is obviously central to the book, as well as scorpions, which appear regularly in the book because they are Marcus Stallworth’s focus as a scientist. How wonderful that they glow if you shine an ultraviolet light at them. The secret of that glow is part of the charge between Lorena and Mr. Stallworth. But all the characters are like scorpions. They all have secrets glowing inside them.

Almond: For sure. I think of scorpions as very much like human beings. Like scorpions, we can be exquisitely sensitive; we pick up on incredibly subtle things in our most intimate relationships. Scorpions, through the tiny hairs on their body, can sense another animal from the movement of a single grain of sand 10 yards away. To me, that’s like a human being when we’re in the presence of somebody we love. We also make ourselves invisible and yearn to be visible. We feel ourselves to be prey to other people’s destructive impulses, which is often how we justify our own destructive impulses. That’s totally a scorpion move.

In a bio-evolutionary sense, we’re afraid of scorpions because they could come out at night and sting us. But I also think it was my way of writing about the subconscious and all of the destructive venom swirling inside of us.

A lot of that venom, by the way, comes from the secrets we keep, both from the world and from ourselves. You might say that the venom in any particular secret is the fact that it’s eventually going to get revealed. That’s what powered me through the book, just the knowledge that all the secrets being kept were going to burst into view — and sting.

Chris Walsh teaches at Boston University and is the author of Cowardice: A Brief History. Previously for the Arts Fuse he reviewed the Kardashian sisters’ novel Dollhouse and interviewed the great Chandler Travis.