Given the current situation, any attempts to enrich our knowledge of the built environment are valuable.

To paraphrase my thoughtful, scholarly friend and colleague Dr. Nir Buras, architectural literacy empowers everyone to engage in what should be a public dialogue about urban design, enabling planners and designers to propose forms that the public can understand and appreciate. At its heart, the urban experience is egalitarian. Everyone should be able to comprehend architectural language and its approaches.

The ability to read and make sense of the built environment is key to breaking down roadblocks that have become common: visual lethargy, hair-trigger NIMBYism, deadlocked communities, indignant debates between neighborhoods and developers, and a game of strategic procrastination played by all sides. Given the current situation, any attempts to enrich our knowledge of the built environment are valuable. So a salute to two provocative books — and a West End play! — that spread some much-needed illumination.

When we think of Chinese architecture, we envision pagodas, Asian structures that are as iconic as they are ubiquitous. A pagoda is a tiered tower with multiple eaves common to China, Japan, Korea, Vietnam, and other parts of eastern Asia. Most pagodas were originally built to serve a religious function; they were often located in or near a monastery. Most were Buddhist, though there are Taoist examples as well. Over two millennia, the form has been used for a variety of functions.

In The Borders of Chinese Architecture, internationally acclaimed scholar Nancy Shatzman Steinhardt brings an authoritative perspective to answering a fascinating question: why has Chinese architecture remained a stylistic constant for 2,000 years?

Over the last two millennia an overwhelming number of Chinese buildings preserved many common features; they have been elevated on platforms, supported by pillars, and covered by ceramic-tile roofs. Less obvious elements, such as the brackets that connect the pillars to roof frames, have been remarkably consistent as well. These structural and aesthetic requirements — be they for residential, funerary, religious, or garden structures — are significantly similar in Buddhist, Daoist, Confucian, and Islamic applications.

Steinhardt also takes up other questions. How did Chinese architecture keep up its systematic standardization for so long? And why did this style move beyond China’s borders? The historian carefully examines the essential features of Chinese architecture, following its transmission across the centuries. Along the way, she investigates the evolution of aesthetic and engineering demands, from the predynastic period through the 18th century.

The Borders of Chinese Architecture is a scholarly and provocative read about the cultural significance (and enduring power) of non-Western architectural ideas.

Throughout the ’60s and ’70s, neighborhood activist and polemicist Jane Jacobs and mega-builder/planner Robert Moses acted out a good versus evil morality play in New York City. The flexible prerogatives of the neighborhood were set against the inflexible planning of centralized power. The conflict has been raging for nearly 50 years, but this black-and-white scenario has been, in more recent years, looked at with considerable nuance. Two influential books set out the earlier face-off: Robert Caro’s in-the-weeds biography of Robert Moses, The Power Broker (1974), and Jane Jacobs’s own 1961 best-seller, The Death and Life of Great American Cities.

From 1920 onward, the Yale and Cambridge University-trained Robert Moses radically changed the landscape of America. First in Long Island, then in Manhattan, and then across the entire US. For 40 years, Moses was the most powerful man in New York, creating new parks, new bridges, and 627 miles of expressway. But in the ’50s grassroots campaigns were organized against him, and they slowly eroded his dictatorial ideas about how a city should be arranged. Moses’s fall from grace was about more than an overweening ego that tipped over into self-serving fanaticism. It was a warning about ignoring changing times and public empowerment.

Jacobs, on the other hand, was not a college graduate. She was a journalist. Those who wanted to diminish her categorized her as an activist mother rather than a respected author. In 1956, her stand against Moses’s plan to destroy what she saw as the best qualities of her beloved Greenwich Village encouraged her to become a very public intellectual. She became “the sainted neighborhood activist.”

Criticism of her stance has grown recently. Her rigidity has been pointed out, particularly her adoration of a vision of life on the streets of “the Village” whose appeal was evident to the affluent, not their poorer neighbors. Unintended consequences were the inevitable result of her thinking. Today Jacobs could be considered the Mother of Gentrification. Seemingly architecturally challenged, she didn’t see that brownstones were a more powerful contribution to livability than maintaining the hotdog vendor on the corner. What happened in the spaces between the structures has never been more important than the structures themselves.

Partly drawing upon Caro’s book, Straight Line Crazy dramatizes the  NYC battle fought over the integrity of Greenwich Village’s Washington Square Park. Moses, the ambitious, ruthless mid-century civil engineer/urban and regional planner who aimed to drive Fifth Avenue traffic straight through the Square, is pitted against a coalition of neighborhood activists led by Jacobs. Apparently, she figures as the drama’s deusa ex machina.

Hare’s notion of Moses is that he was not so much driven by a hunger for power than overcome by an idealism that had curdled over time. To Moses, life was horrible for the working class in these tenements, so let’s get them out to enjoy some fresh air, sun at beaches, drive on parkways that did not just belong to the upper classes. It was a sincere democratic urge. He was later convinced that it was necessary to knock tenements down and move these people into “nice,” clean, Corbusier-inspired blocks.

Unfortunately, Moses took no notice that he was destroying communities that were made up mostly of Hispanics and Blacks and working-class whites. James Baldwin summed up the local anger in a sentence: “Urban renewal means Negro removal.” Time and again, liberal dreams of improvement turn into nightmares. Moses’s detachment from political realities and lack of empathy led to his professional demise. And that apparently makes for effective drama as well as valuable instruction about architectural conflicts. Straight Line Crazy opened to mostly positive reviews. We will see if someone produces it in America. 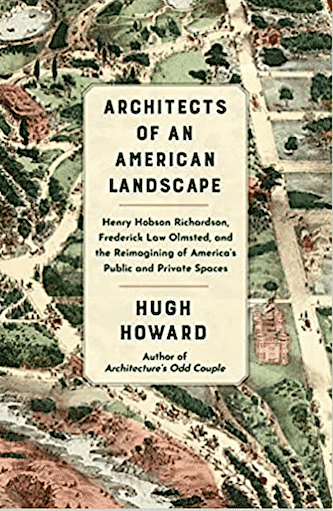 Hugh Howard’s beautifully written study painstakingly laces together the lives and careers of the father of landscape architecture, Frederick Law Olmsted, and one of the first great American architects, Henry Hobson Richardson. This superbly researched dual biography alternates its chapters between a pair of visionary protagonists. (Though the narrative also contains superbly detailed character sketches of other 19th-century celebrities.) Together, Olmsted and Richardson transformed the look of American buildings and landscapes, exerting a huge influence on the design of residences, parks, and public spaces throughout North America.

Frederick Law Olmsted created Manhattan’s Central Park, Brooklyn’s Prospect Park, Boston’s Emerald Necklace, Biltmore’s parkland in Asheville, and dozens of others parks across the country. He was also involved in the preservation of Yosemite and Niagara Falls. His pioneering innovations as “a democratic designer of places that belonged to everyone” paralleled the goal of Richardson’s iconic architectural projects, which included Boston’s Trinity Church, Chicago’s Marshall Field Wholesale store, many public libraries, commuter train station buildings, commercial buildings, and single-family houses. The architect based his mature style primarily on medieval designs — it was called Richardsonian Romanesque. He also developed what was categorized as the residential Shingle Style as well as open plan interiors for family homes.

These two giants attained their success after the Civil War and represent the best of the American Gilded Age. They were stark physical contrasts: Olmsted was small and reserved while Richardson was of Falstaffian proportions and exuberance. Their creative sensibilities and environmental outlooks, however, were closely aligned. And they relished collaborating with each other. These giants of design were not only friends and professional colleagues but neighbors in the Town of Brookline, in Massachusetts. Their mutual influence indelibly shaped how Americans perceived architecture and landscape design — that it should strive to marry the built and natural environments. Their work elegantly shifted American perceptions of a desirable home: away from life in congested cities to a calmer residence in less crowded suburbs.

An urban designer and public artist, Mark Favermann has been deeply involved in branding, enhancing, and making more accessible parts of cities, sports venues, and key institutions. Also an award-winning public artist, he creates functional public art as civic design. The designer of the renovated Coolidge Corner Theatre, he is design consultant to the Massachusetts Downtown Initiative Program and, since 2002, he has been a design consultant to the Red Sox. Writing about urbanism, architecture, design and fine arts, Mark is associate editor of Arts Fuse.