At times, Laurel Hell’s withering fatigue is directed at the clash between commodification and art. 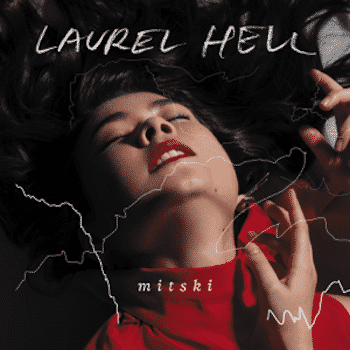 In 2019, Mitski announced that her next concert would be her last for the foreseeable future. “It’s time to be human again. And have a place to live,” she wrote in a Twitter post. The exhaustion reflected in  those words echoes throughout Laurel Hell, the album that marks her long-awaited return. She ruminates on her career, her relationship to the music industry, and her own mental health, backing up these generally arresting narratives with weighty indie pop arrangements. Despite Mitski’s fatigue, her artistic trajectory hasn’t undergone a radical change. This album suggests that she doesn’t need to reinvent herself, at least not yet.

Mitski’s arrangements effectively strengthen her narratives. The understated, drawn out synths on the opener, “Valentine, Texas,” provide an eerie backdrop to Mitski’s reassuring “Let’s step carefully into the dark/once we’re in, I’ll remember my way around.” Halfway through, the quiet track suddenly erupts: booming drums cut in, supported by louder, discordant synth tones. This stark contrast drives the brief track forward, and the approach sets a zig-zag vision for a portion of the album. “There’s Nothing Left Here for You” abruptly shifts from gentle noise to cacophony, a change that underscores the song’s depiction of a wrecked relationship.

That said, the instrumentals occasionally come off as one-dimensional. The dejected “I Guess” is practically formless —  the barely there keys of the the instrumental don’t supply much of a payoff. Mitski’s compelling lyrics convey the void left by a broken relationship: “It’s been you and me/since before I was me/Without you, I don’t yet know/quite how to live.” But the song never moves beyond the fragmentary.

When the instrumentals are engaging, though, Laurel Hell succeeds. “Should’ve Been Me” sounds upbeat with its bright, jangling synth lines. But when Mitski brings in her vocals, it’s to lament: “You wanted me, but you couldn’t reach me/I’m sorry, it should’ve been me.” The closing “That’s Our Lamp” is another instrumental highlight: its funky, rollicking groove makes excellent use of a cowbell. Here Mitski channels a personal memory through an object, singing “That’s our lamp/Shining like a big moon/We may be ending.”

The best instrumentals here serve to buoy Mitski’s showstopping songcraft. Take Laurel Hell’s excellent lead single “Working for the Knife.” The track opens on a vivid scene: “I cry at the start of every movie/’cause I guess I wish I was making things too/But I’m working for the knife.” This salvo is backed by a dirge — harsh synths wail after every verse, underscoring an unfolding discord. It’s a critique of the capitalist music industry, and how it shapes Mitski’s artistry.

Weariness permeates the track list. Every event, whether it be the creation of art or the end of a relationship, comes with so much baggage that day-to-day existence is too much. “Stay Soft” examines the painful difficulty of vulnerability: “you stay soft, get beaten up, only natural to harden up.” Elsewhere, “Heat Lightning” dramatizes a night of feverish insomnia. Mitski is kept awake by a coming storm, one she knows she can do nothing to prevent. The track blossoms with woozy synths tinged with tidbits of anarchy, mirroring the late-night mania.

Laurel Hell’s withering fatigue is directed at the clash between commodification and art, as in “Working for the Knife.”  “Everyone” speaks to the emotional emptiness that has accompanied Mitski’s success. Downcast drums plod along next to a bass line; this stripped-back foundation is slowly joined by ominous swells of synth and discordant piano chords. Over this dreary soundscape, Mitski sings of being physically drained: “I said, ‘take it all, take whatever you want.… I didn’t know what it would take,” she mourns.

Throughout this overwhelming turmoil, Mitski retains agency over her own pain. “The Only Heartbreaker” is a breathless breakup tune, one where the blame is placed squarely on the singer: “as long as we’re together/I think I’ll be the only heartbreaker.” But Mitski chafes against being cast as the  villain, singing “I’ll be the water main that’s bursting and flooding/You’ll be by the window, only watching.” Being the “bad guy” is better than doing nothing. Her words are accompanied by twangy, fast-paced guitars, implying a restlessness that Mitski is keeping under control.

In a way, Laurel Hell is the story of an already-lost battle. Mitski rails against how the music business treats her intensely personal art, but she acknowledges that the hypercommercial industry is her livelihood. It’s not a new question for artists, but it remains as bedeviling as ever. It’s no wonder Mitski is exhausted.