You are here: Home / Books / Book Review: “Through a Screen Darkly” — Psychological Strategies for Moving Beyond the Pandemic

I found Through a Screen Darkly to be as enlightening as it is useful: we don’t just read about and invest our emotions in other lives; we learn what to do about our own.

Through a Screen Darkly: Psychoanalytic Reflections During The Pandemic by Ahron Friedberg with Sandra Sherman. Routledge, 198 pages, $26.36 (paperback). 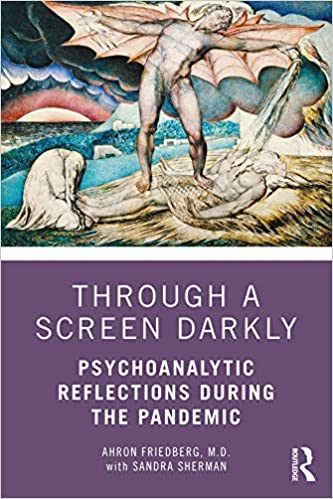 When books started coming out about life in time of pandemic, I averted my eyes. I even dodged blogs, essays, and articles re: the fallout of the virus. I had just lived all that — we’re still living most of it — and I didn’t want to revisit it, vicariously or otherwise. So I was surprised to find myself picking up Through a Screen Darkly by Dr. Ahron Friedberg, a Manhattan-based psychiatrist. The cover, dominated by a dramatic if somewhat ominous ink drawing by William Blake, was attractive enough. I opened up to a random page — 114 as it happened — and started reading:

“Victorian novels are readable again! And not just because we have time to plow through these triple-deckers. Rather, it’s the melodrama, the sudden and extreme twists of fate that were possible then and now seem all too real in a post-COVID world…. In the space of one chapter, your savings disappeared, your railroad stock turned out to be worthless, and your husband’s first career as professional gambler upends his new perch as Bishop of London.”

Friedberg goes on to reference George Eliot’s Daniel Deronda, comparing the novel’s heroine to a patient named Hillary, who went from a six-figure salary to the unemployment queue — nowadays in cyberspace — and I was hooked. I suddenly saw the appeal of what I’d been avoiding: It was enlightening to know what other people were going through, cathartic to witness the reversals of fortune, reassuring to discover the coping mechanisms, the improvised solutions to isolation, cabin fever, and the dread that comes with an all-pervasive uncertainty.

“Among my patients,” Friedberg writes, “I have never seen such a sudden access of single-minded fear. All their usual, kaleidoscopic concerns — office politics, children, extramarital affairs — have snapped into abeyance behind one overriding worry: everything feels out of control. What comes out when we talk is a kind of hyped-up banality, a sense that quotidian tasks are inflection points along the road to their only goal: not getting sick.”

In another section of the book, Dr. Friedberg warns a patient, “Right now, you could make 100 right decisions, but if you make one wrong one, you could be dead.” He advises the patient in question to ease up on the accelerator and consider his options more carefully.

Through a Screen Darkly is in part a collection of bite-size, compulsively readable case histories (each lasts about three pages). The title, alluding to Saint Paul’s famous metaphor in 1 Corinthians, was inspired by the altered reality Friedberg faced when forced to move his practice online. “Screens make possible whatever vision we have,” Friedberg observes, but he recognizes that the screen is also “a barrier,” separating people from one another.

I found turning the book’s pages to be somewhat akin to peering into the windows of a high-rise tenement across the way. An apartment building, after all, is an array of lives shelved right next to each other. Friedberg’s book grants us access to this human library. Minor mysteries, which had beguiled us as brief gestures when the curtains were open and the lamp was on, come into focus. A sampling of the individuals we meet via this guiltless voyeurism includes:

Hillary, the laid-off, single mother of two who has little in the way of savings, receives no alimony, and now, after getting over her disbelief (“I never thought this could happen to me …”), has to find her way in a radically transformed job market.

A ceramic artist from a family of thwarted Bohemians who closes her Manhattan shop, moves her business online, and begins bringing in more money than she’d been earning before the pandemic but shuts it down out of guilt. “She believes,” explains Friedberg, “that pursuing art when people are out of work and desperate is immoral.”

A science fiction writer who has writer’s block because he can no longer imagine the future: “Who can say anything about tomorrow?” he asks. “It’s a blur as far as the eye can see.” 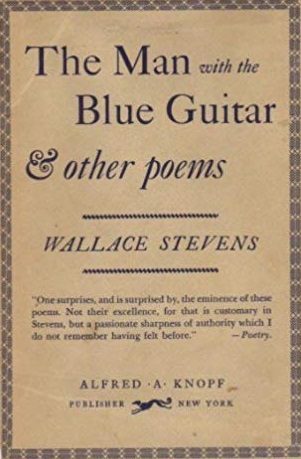 One of the things I particularly enjoyed about the book is Friedberg’s use of literature to illuminate both the practice of psychiatry and his patients’ struggles. Among the authors he cites — and from whose work he often extracts passages — are William Wordsworth, William Carlos Williams, Robert Pinsky, F. Scott Fitzgerald, Alexander Pope, Herman Melville, and Theodore Roethke. Not surprisingly, one of the good doctor’s own coping mechanisms is reading poetry. Poetry, he finds, provides structure but also offers a means of reflecting “on the larger issues embedded in tragedy and loss.” He makes superb use of the opening of Wallace Stevens’s “The Man with the Blue Guitar”: “Psychiatrists,” Friedberg explains, “are not poets. But we are somewhat like the guitarist/poet in that we play another person’s reality back to them, interpreting it through our own experience and understanding.… We try to find the psychological truth and make it more apparent.” He then segues into perhaps the most poignant of these brief human dramas, the story of Raul, a Cuban American who lost his only son to Covid and blames himself for the boy’s death.

The book, however, is more than snapshots of patients, their fears, anxieties, and dilemmas. In a lucid, refreshingly nonacademic style, Friedberg offers expert analyses of the psychological effects of the pandemic as well as strategies for moving forward. He points to resilience, which calls for mental and emotional flexibility, as the linchpin. This flexibility, however, isn’t valuable solely as a way to weather Covid-19. “We should cultivate it for the long haul,” urges Friedberg, “learning to be adaptable, to make connections, and to act decisively when the need arises.” We should “think of resilience as part of our personal reserve, like the strength in our muscles, rather than a quick-fix skill.” Indeed, the blog Friedberg writes for Psychology Today, which is where these patient-doctor encounters were first recorded, is called Resilience. His case for our making ourselves more resilient, whatever the crisis, is persuasive.

Friedberg comes at the pandemic from numerous angles, discussing everything from the unsettling absence of street noise in Manhattan after the lockdown (the New York Public Library tried to fill the vacuum with loanable recordings of ambient city sounds) to the therapeutic value of grooming, dressing up, and putting on makeup — even if you have nowhere to go. He contextualizes the pandemic historically, discussing the Great Plague of 1665 while pointing out that sales of Daniel Defoe’s A Journal of the Plague Year, published in 1772, increased sevenfold during the pandemic (apparently, I’m in the minority when it comes to reluctance to read tales inspired by widespread illness). The book is also loaded with color illustrations, which break up the text and visually ground the narratives. Many of these pictures recall an earlier America, but some are far older and from elsewhere, including medieval Europe and Japan. If there’s a drawback to the book, it’s that we don’t always find out whether Friedberg’s patients resolve their crises. They’re still in therapy and often still working through their issues, still testing solutions. Nonetheless, I found Through a Screen Darkly to be as enlightening as it is useful: we don’t just read about and invest our emotions in other lives; we learn what to do about our own.

Vincent Czyz is the author of Adrift in a Vanishing City, a collection of short fiction that was awarded the Eric Hoffer Award for Best in Small Press; The Christos Mosaic, a novel; and The Three Veils of Ibn Oraybi, a novella. He is the recipient of two fellowships from the NJ Council on the Arts, the W. Faulkner-W. Wisdom Prize for Short Fiction, and the Truman Capote Fellowship at Rutgers University. His work has appeared in many publications, including New England Review, Shenandoah, AGNI, Massachusetts Review, Georgetown Review, Tin House, Tampa Review, Boston Review, and Copper Nickel.