This is an album of real spirit and vigor, a mix of the thoughtful and the exciting, all bracingly recorded.

In the annals of sibling rivalries, surely the relationship between Fanny Mendelssohn Hensel and Felix Mendelssohn was unique. Both were preternaturally talented musicians, yet despite Felix’s career far outpacing his sister’s, they remained close, personally and musically, throughout their short lives. (Fanny suffered a fatal stroke while rehearsing her brother’s cantata, Die erste Walpurgisnacht, at 41; Felix never recovered from the shock of her death, dying just six months later. He was 38.) 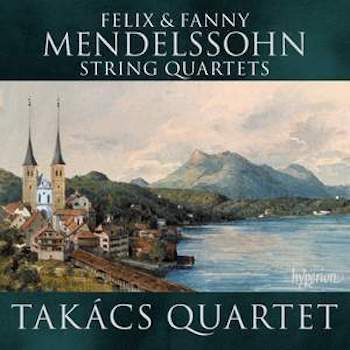 The Takács Quartet’s new album celebrates the duo with a new recording of Fanny’s String Quartet in E-flat paired with her brother’s A-minor (op. 13) and F-minor (op. 80) entries in the genre.

What emerges in their performance of Fanny’s composition, written when she was 29, is a quartet that’s, frankly, as well put together as any of her brother’s. Moreover, it’s one with a distinct point of view: the four movements alternate slow and fast tempos, each strongly shaped and knowingly scored.

The first’s sober, songful opening, for instance, builds to a moment of cathartic release about three-quarters of the way through. Similarly, the slow third movement, again in the minor mode, is tense and unsettled.

Contrasting with these is a stately, slightly diabolically dancing second movement that’s highlighted by a wonderful polyphonic sequence around its middle, and an exuberant, playful finale.

The Takács’s performance of the whole piece is warm and lyrical, but always urgently focused. They imbue the slow movements with a strong sense of direction, and light in the bravura episodes in the fast music: indeed, the opening of the second is gossamer.

A similar spirit of concentration marks the ensemble’s playing in Felix’s quartets.

In the A-minor, the group whips up quite a fury in the opening movement’s development; throughout, their interpretation is marked by mighty contrasts of dynamics and intensity. They etch the second’s hymnlike refrain with devotional reverence, while the third’s central scherzo dances with elfish dexterity. The finale is, likewise, powerfully sculpted and full of foreboding.

That anticipation was resolved, in a manner of speaking, in the F-minor Quartet, which Felix wrote in response to Fanny’s death in 1847. Full of dark, violent gestures, this is a piece that effectively blows up the image of the composer as little more than a delicate Victorian doll.

Certainly, the Takács’s performance of it is biting and punchy. There are, again, big contrasts in the first movement, here most strikingly between the raw tremolo figures at the beginning and the warmly lyrical moments that follow.

While the second movement never quite moves out of the shadows (the Takács’s reading of the Trio is particularly crepuscular), the group brings balmy soulfulness to the gorgeous slow movement. Their take on the finale is, fittingly, driven, the coda torrid.

Overall, then, this is an album of real spirit and vigor. Periodically, the quartet’s shaping of lyrical lines — which can involve generous dollops of portamento — gets cloying. But otherwise, there are no qualms about either the performances or the program: it’s a mix of the thoughtful and the exciting, all bracingly recorded.