You are here: Home / Books / Book Review: “Canceling Comedians While the World Burns” — The Case for Comediansplaining

“Lived experience” doesn’t automatically confer moral or political insight, argues social critic Ben Burgis, but if we can make others laugh at that assumption we might be getting somewhere. 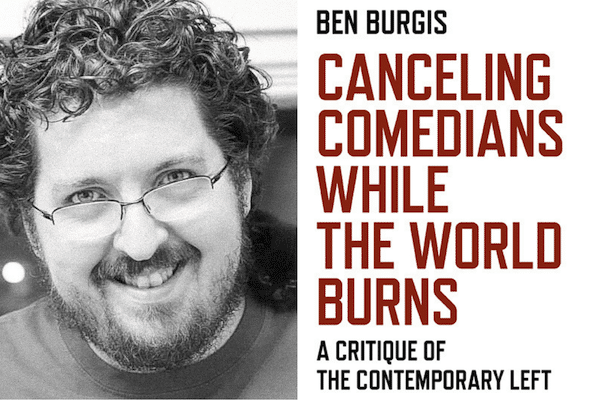 Dave Chappelle has been celebrated for his incisive and irreverent racial humor, but in the past he has taken a lot of flak for his transgender jokes. He might have had that ambivalence in mind at the beginning of his 2019 Netflix special Sticks & Stones. He started with two comic impressions. The first was of the “Founding Fathers of America when the Constitution was being written … ‘Hurry up and finish that Constitution nigger, I’m trying to get some sleep!’” The audience laughed on cue. Then came the masterstroke. Chappelle asked the audience to guess the identity of his next impression: “‘If you do anything wrong in your life, and I find out about it, I’m going to try to take everything away from you. I don’t care what I find out. It could be today, tomorrow, 15, 20 years from now — If I find out, you’re fucking … duh … finished.’ Who is that?” The audience can be heard enthusiastically blaming Trump. Chappelle clarified: “Thaaaaat’s YOU!”

Enter Ben Burgis with his new book, Canceling Comedians While The World Burns. Focusing on “the political subculture of the left,” he criticizes what he calls “the pathologies of powerlessness” at the core of “cancel culture.” He argues that “anyone with a worldview to the left of liberalism” has been forced to adapt to a paradigm of “capitalist realism” — the belief that there is no alternative to our current economic context. We have to work within that system, which leaves the left with a stark decision: “faced with a choice between just becoming a liberal [centrist] or growing to see politics as a kind of moral performance.”

Virtue signaling, or call it what you will, compensates for the left’s inability (or reluctance) to demand genuine economic change. At the bottom of our current “heresy-hunting frenzies” is a desire for compensation, to feel politically triumphant, even if it is only in ineffectual ways. This ritual of self-celebration — typified by the “heroic” postures struck by campus radicals, cable news hosts, and career activists —  has become a major part of the “political subculture of the left.” Burgis believes that this obsessive allegiance to virtue-rooted-in-identity has become pathological, whether it is found on the left or right. The arguments associated with “identity politics” are inevitably rooted in the same source: an embrace of the impregnable power of subjectivity (or to our proclaimed “subject positions,” at least) rather than a call to reason.

In this short book Burgis wants to dispel this illusion. “‘Lived experience’ doesn’t automatically confer moral or political insight,” he writes, “Anyone who’s seen right-wing Venezuelan emigres who supported Juan Guaidó’s attempted coup accuse American leftists of ‘Venezuelasplaining to them,’ or right-wing Jewish people charging non-Jewish [and we may add also Jewish ones] supporters of the Palestinian call to boycott Israel of anti-Semitism (and insisting that any attempt to refute this charge violated the principle that ‘Jews get to define anti-Semitism’) should have realized by now that this game can be played in any number of directions.” The game that is being played is dangerously double-edged, and it is also guaranteed to fail. Those on the left who play it end up succeeding “in making [themselves] look both spectacularly unappealing and completely powerless.” Oops, your pathology is showing!

Burgis, a Georgia-based writer and philosophy instructor, is also a columnist for the socialist magazine Jacobin and a member of the Democratic Socialists of America (DSA). He recalls right-wing ridicule of a 2015 DSA convention in which participants were seen compelling one another to silently applaud. The idea was to be sensitive to attendees who object to loud noise. Burgis takes ironic note of criticisms from the likes of Fox’s Tucker Carlson: “Changing … reality is immensely difficult. But if you can at least get the DSA Convention to accommodate every last demand you dream up you can tell yourself that you’re racking up victories somewhere for the rights of the disabled.”

Beyond elemental inanity, Burgis senses something more pernicious than oversensitivity to the “other” in all of this. He points out the hypocrisy of rabid virtue-signalers: there’s “a massive and frankly bizarre inconsistency in the views of people who, in all sorts of other contexts, center subjective experience … but who somehow think that no one has any grounds for complaint about the relentless cruelty displayed in online pile-ons if the victims of those pile-ons still have careers at the end of the process.” He also knows what compromise with the corporate class looks like when he sees it: “otherwise materially powerless online mobs ally themselves with the semi-feudal power of American capitalist employers by ‘doxing’ people.” And, perhaps most damaging of all, Burgis sees “cancel culture” as a way in which the capitalist “Professional-Managerial Class” weaponizes “their fetishization of education and credentials.” Those who are determined to separate the sheep from the goats, the right from the wrong, serve as a disciplining buffer, separating the haves from the have-nots.

“Cancel culture” spreads according to the same horrible logic as a purge: “You can be deemed worthy of cancellation for not canceling someone deemed worthy of cancellation — never mind whether you’ve done anything at all.” Yet, unlike the  purges of yore, when something was at stake (power, money, glory), victory here amounts to acts of farcical self-righteousness that alienate potential allies and surrender precious common ground. Burgis believes that this kind of in-fighting may have made sense (or at least was understandable) in the “political subculture of the left” in the past, but he sees things very differently now. Today, when opportunities for material gains for the underclass are a real possibility, this kind of internecine warfare is no longer tenable. Unity, not fragmentation, is called for.

Which brings us back to comedians. Burgis reminds us of the 2010 “Rally to Restore Sanity and/or Fear” led by John Stewart and Stephen Colbert, where participants carried signs saying “I disagree with you but I’m pretty sure you’re not Hitler” and “What do we want? Moderation!!! When do we want it? In a reasonable time frame.” This was a neutered reenactment of a political rally, a blandly moralized facsimile. Burgis argues that “feeling betrayed when Dave Chappelle tells a joke that reveals that he doesn’t share all of your moral and political values is the flip side of the same ridiculous coin as following your favorite late-night hosts through the streets of Washington, D.C. holding a protest sign.”

I would argue that the observation should be taken further. It is bad enough that while the world burns we are canceling comedians. But it is even worse that comedians are afraid of challenging the forces that are doing us in. Over the centuries, humor has had a crucial role in helping to establish (and test) shared cultural experiences, including our understanding of just what’s subjective. Laughter articulates intellectual contradictions and human weaknesses, wallows in the cleansing yuks of anarchism and inanity. Language can be harmful, yes, but humor helps free words from the clutches of ignorance and authority. Slavoj Žižek has noted the ways in which the increased rarity of intra-ethnic jokes corresponded with the collapse of civil society in Yugoslavia and the retreat into violent ethnocentric passions. Are we, too, to fall into such violent fragmentation? We, heirs to the legacies of Enlightenment liberty?

John Locke’s patron, the Earl of Shaftesbury, wrote: “It was heretofore the wisdom of some wise nations to let people be fools as much as they pleased, and never to punish seriously what deserved only to be laughed at, and was, after all, best cured by that innocent remedy.” That was all well and good for so-called polite “nations” in the 18th century. But the denizens of the Twitterverse have abandoned Shaftesbury’s live-and-let-live conclusion for the thrills of political/moral bloodsport. As for the sacred duty of comics to wield their axes in all directions, look no further than Dave Chappelle’s recent pandemic-era performances in the cornfields of rural Ohio. From the epicenter of the white opioid epidemic he dared to joke about crack cocaine’s legacy in Black America. Instead of the rectitude of cancel culture, his goal is to recognize our commonality — in a way that perhaps only comedy can accomplish.