Bottom line: these are excellent performances and a valuable documentation of Elliott Carter’s early work. 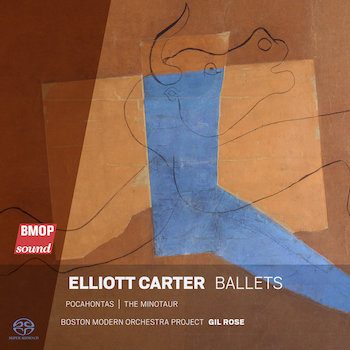 Elliott Carter lived so long and wrote so much of consequence over the last half of his 104 years that you can go a long time without encountering anything from his first four decades. But the Boston Modern Orchestra Project (BMOP) aims to rectify that, at least in part, with a new recording pairing Carter’s two ballet scores, Pocahontas and The Minotaur.

Both were commissioned by Lincoln Kirstein: Pocahontas in 1939 (for Kirstein’s Ballet Caravan) and The Minotaur in 1947 (for the Ballet Society of New York). Each score is voguishly (for the day) neo-Classical, but also, often enough, harmonically acerbic.

Pocahontas’s plot elaborates the tale of Pocahontas rescuing John Smith and sailing with him (and her husband, John Rolfe) to an early death in England. Carter’s writing in the ballet echoes Stravinsky in rhythmic energy and Copland in bright scoring though, crucially, lacks a needed through-current of dramatic tension and melodic memorability. The finest moments come during the torture of Smith — a menacing processional leads to a crafty weaving together of themes heard earlier in the piece — and the tragic, closing “Pavane.”

Otherwise, Pocahontas proves an agreeable score — if not quite a bracing one. Textures are highly contrapuntal throughout; Pocahontas gets some alluringly lyrical music; and the orchestral writing shines (especially Carter’s scoring for woodwinds).

The Minotaur, which adapts the story of Theseus killing the eponymous monster and leaving behind the admiring Ariadne, is cut from similar cloth. Again, the narrative’s apex – Theseus’s fight with the man-eating beast – gets the most focused music: so visceral, in fact, it calls to mind some of the day’s great writing for film by Carter’s contemporaries, like Bernard Hermann and Miklós Rósza.

As in Pocahontas, Carter’s writing in The Minotaur is often polyphonic. His scoring, though, is even cleaner and more concise than earlier. Accordingly, the piece boasts several aurally striking episodes, such as the juxtaposition of lyrical melodic lines and threatening accompanimental gestures during the “Interlude”; and the lovely sequence of flute, violin, and cello solos during the pas de deux between Ariadne and Theseus.

While neither of these pieces quite add up to more than the sum of their parts, it’s hard to quibble with the full-throated, invigorating performances conductor Gil Rose draws from BMOP in both ballets. The ensemble takes to Carter’s writing with alacrity. In Pocahontas, the orchestra’s woodwind section and harpist Franziska Huhn shine resplendently. The full ensemble’s account of The Minotaur proves at once fresh, driving, and involved.

Bottom line: these are excellent performances and a valuable documentation of Carter’s early work. If you’re a fan of American orchestral music, generally, and this largely neglected (but rich) mid-century neo-tonal period, particularly, don’t miss it.