Ferlinghetti was a truly Whitman-like figure who really had been through it all, traveled the world, and fought for what he believed in. I have yet to hear anyone say an unkind word about him.

Considering the fact that my teenage discovery of the Beats was nothing less than life-changing—I’d probably be working at a pizza shop right now if they hadn’t turned me on to art when I was still young — I can’t fully disrespect them, even if their legacy isn’t without its drawbacks. For the mainstream at least, the image eventually became more important than the reality. Burroughs himself once sniffed that Jack Kerouac sold a million pairs of Levi’s. Poetry is a sacred and existentially sustaining art, but the Beats’ insistence on spontaneous composition encouraged a lot of people to see it at its worst, assuming that verse would be the fruits of getting stoned and jabbering. Hey, that’s what real artists were supposed to do. The truth, as demonstrated by the jazz musicians the Beats idolized, is that the spontaneous thrill of improvisation requires years of intense training and hard work.

Randall Jarrell once suggested that being a genius meant standing in the rain and getting hit by lightning a couple of times. Kerouac, Ginsberg, and Burroughs wrote plenty of nonsense and, in some cases, acted horribly to those closest to them. Yet at their best these writers also came up with the fruits of the spiritual, intellectual, and aesthetic work that goes into making it new, to borrow the modernist phrase from the previous generation. Lawrence Ferlinghetti, who died recently at the impressive age of 101, maybe isn’t as well known as his comrades (an anarchist, he never really liked any labels, Beat or otherwise). It turns out he made it a lot farther than they did by embracing the slow and steady route. He spent decades making invaluable contributions to the counterculture he helped to grow, both on the page and in the world.

Ferlinghetti’s poetry has a wit, erudition, and generosity of vision that, unlike so much “difficult” contemporary verse, is dedicated to direct communication — it is accessible. You can pick up A Coney Island of the Mind or Pictures from the Gone World and dig into them without having any special grounding in poetry. There’s nothing wrong with obscurity or density in poetry, or in any art for that matter — following one’s muse doesn’t mean you have to color by numbers. Sometimes it pays to make readers work to arrive at the meaning of a poem. But Ferlinghetti’s voice on the page addresses the reader frankly and intimately. He is like a streetwise local sitting next to you at a bus stop and letting you in on what he sees.

Take the poem “Dog,” for example. Ferlinghetti’s titular mutt “trots freely in the street” unbeholden and indifferent to the innumerable vanity and cruelties of mankind. Poking his nose at what’s going on at street level, he isn’t impressed by big towers and looming skyscrapers, and “he doesn’t hate cops/ he merely has no use for them.” Nor does he heed the political bigwigs who shout about Communist infiltration: “but what he hears is very discouraging/ very depressing/ very absurd/ to a sad young dog like himself/ to a serious dog like himself/ But he has his own free world to live in/ His own fleas to eat/ He will not be muzzled/ Congressman Doyle is just another/ fire hydrant/ to him.”

Ferlinghetti recited this and quite a few other poems in a wonderful recording that’s available online: Coney Island of the Mind , Pt. 1 – YouTube. The book went on to sell over a million copies worldwide and was translated into several languages. Who knows how many people picked up a copy and started following the distinctions that lead to discovery? That’s how you turn people on to what’s happening beneath the shiny surface of American life. And you could have had much worse guides to the underground than Ferlinghetti. It’s not for nothing that he appeared at The Band’s Last Waltz concert, looking dapper and irreverent in a bowler hat and workman’s shirt, mock-seriously reading his poem “Last Prayer,” which subverts all the traditional pieties of church and state: Lawrence Ferlinghetti – Last Prayer (The Last Waltz) – YouTube

He had grown up a worldly New Yorker after having shuttled through different relatives’ houses. He spoke French as a child. By his own account, he’d been a pretty ordinary red-blooded American lad until he’d seen the ravages of Hiroshima up close during his service in WWII. Instantly he became a pacifist. He earned his master’s from Columbia and got a PhD in art history from the Sorbonne on the G.I. Bill. He eventually settled in San Francisco, helping to keep that city’s bohemian tradition vibrant. He was aware of the big-techno-creep as it gradually encroached and privatized everything in its path, raising rents and filling the streets with arrogant Silicon Valley bros. He satirized it with crackling good humor, as was his style: “a young stud at the next table typing on his laptop, both ears stopped with headphones…. I’m just five feet from the guy. Finally I say in a friendly voice, ‘You from around here? Haven’t seen you before in the neighborhood.’ No answer. He continues typing, staring at the laptop. He heard nothing? Is this body alive? I’m alarmed. I call 911. After some time a cop car arrives and he’s arrested for ‘nonparticipation in humanity.’ They haul the corpse away.”

Crucially, Ferlinghetti had the foresight to institutionalize, so to speak, the primal Beat value of free expression by opening the City Lights bookstore in North Beach in 1953. It proudly hewed to a paperbacks-only policy, imported “radical” newspapers from Europe, and hosted readings. It was an indispensable salon for malcontent wordsmiths of all stripes. Ginsberg’s incendiary HOWL & Other Poems was condemned by the powers that be a few years later; the poet was put on trial for obscenity in another one of those All-American frenzies of Puritanism. City Lights was only in its infancy, so Ferlinghetti put a lot on the line by defending the book in court. He eventually won the case, with star witnesses from across the literary spectrum testifying to the book’s literary value. It didn’t hurt sales, of course, but there are a number of other ways to promote a bookstore. 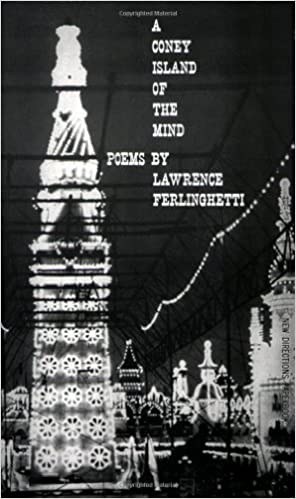 Today, City Lights is still an internationally beloved literary landmark, maybe America’s answer to Paris’s Shakespeare & Company. It still publishes many international writers, and people from the LGBTQ community. It also keeps lesser-known but no less worthy poets like Bob Kaufman, Lew Welch, Jack Hirschman, and Boston’s own Stephen Jonas in print. When the word got out that COVID-19 lockdowns put the store in danger, people stepped up and promptly raised a heap of cash to keep the lights on.

Ferlinghetti didn’t burn out or fade away, either: always true to his questing spirit, he kept the books coming, painting constantly, publishing the lively and uncategorizable Little Boy in his centennial year. Looking over the later work, it’s inspiring to discover that the quality doesn’t diminish. Ferlinghetti’s still very much out and about in the world in his 60s and 70s: hiking through Mexico, rafting and diving, checking out Matisse, Pissarro, and Picasso, mediating on Dylan Thomas in Wales, reading Apollinaire by a river in France, watching the old Italians die, and writing “An Elegy to Dispel Gloom” after the assassinations of San Francisco mayor George Moscone and supervisor Harvey Milk. He kept making the scene long after the scene made him.

Ferlinghetti was a truly Whitman-like figure who really had been through it all, traveled the world, and fought for what he believed in. I have yet to hear anyone say an unkind word about him. I haven’t forgotten a moment in A Rebirth of Wonder, a swell documentary about him, where he’s standing in a basement with scruffy Gregory Corso (who had no problem raiding the registers whenever he needed a fix) at a party. Young people are dancing behind the two old poets as they talk. Corso is bitter, whining about how Jack and Allen became famous and “we didn’t.” Ferlinghetti stands grandly indifferent to such ordinary pettiness: he merely shrugs it off, responding that he couldn’t care less. Let us now salute him, and each do our part to help create, as he once put it, “a rebirth of wonder.”