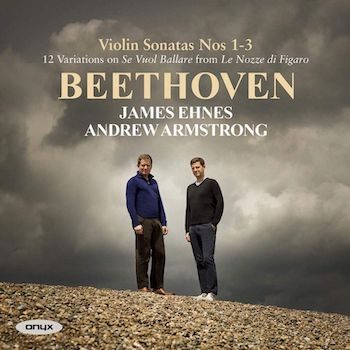 Beethoven’s music, as is often noted, thrives on contrast: of texture, mood, dynamics, structure, and so on. For performances of two of his violin sonatas that draw out the music’s latent play of light and shadow you can hardly do better than the splendid pairing of violinist James Ehnes and pianist Andrew Armstrong.

Together, this is a team that exhibits phenomenal rapport. Their playing is technically flawless. Better, it’s expressively rich: beautifully blended, winningly flexible, and strongly characterful. Indeed, there’s an ease to Ehnes & Armstrong’s accounts of the Violin Sonatas nos. 7 and 10 that fully belies the music’s taxing demands.

Their take on the C-minor Seventh Sonata, for instance, is pure fire in the outer movements. The first is taut and intense, carefully balanced and smartly phrased, but fundamentally lyrical. So, too, the finale, in which the duo’s driven, focused playing never loses sight of the music’s songful impulses – even in the wild coda.

In between comes a radiant Adagio – its textures bracingly clear and lines exchanged with touching immediacy – and a limber, dancing Scherzo.

The G-major Sonata no. 10 exhibits many of the same characteristics, though in a less expressively fraught context. Ehnes and Armstrong’s ensemble is gracefully balanced throughout – still rhythmically tight, especially in the bounding Scherzo and the finale’s play between the lines – but also fresh and relaxed (in the opening movement), and floating serenely in the beguiling second.

In all, then, these are pure, lyrical interpretations that, in all the important ways, feel and sound absolutely right.

Where does one begin with Quatuor 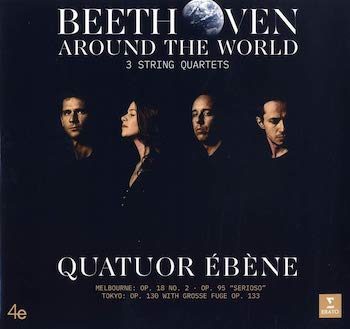 Ébène’s Beethoven Around the World? A compendium of Beethoven’s sixteen string quartets, it was taped between 2019 and 2020 in seven different cities: Vienna, Philadelphia, Tokyo, São Paulo, Melbourne, Nairobi, and Paris. According to a press release, the goal of taking the pieces to these far-flung locales was to emphasize the universality of Beethoven’s music across time and space.

Whether or not that’s accomplished here remains an open question (perhaps it will be answered definitively in the ensemble’s forthcoming Beethoven Around the World documentary). In purely musical terms, though, the present set represents an unmitigated triumph.

There’s a consistency to the Ébène’s readings that is gripping and is owed only partly to the group’s fantastic ensemble: textbook balances, textures, superb intonation, and a flawless sense of musical character. Granted, there are spots, here and there, that feel a hair frantic or static. But the larger picture that emerges of these pieces is dynamic and flexible.

Perhaps most impressive is the way the Ébène approaches the op. 18 set. The most stylistically Classical of Beethoven’s quartets, these readings certainly don’t lack for charm: there’s a Haydn-esque whimsy to be found in each (especially the exuberant capering in the finale of no. 2).

But the quartet also digs into the music’s wild divergencies of mood and texture with conspicuous energy – like the boisterous sforzandos in the first-movement development in no. 1, the urgent shifts between subjects in the same of no. 4, and the eerie “Malincolia” episodes in the finale of no. 6.

At the same time, the Ébène draws out the nuance and atmosphere of Beethoven’s early – but already mature – writing. The slow movement of no. 1 is tautly realized, its sudden silences fittingly intense. The clarity of the voices in the opening movement of no. 3 is faultless. And the third-movement variations of no. 5 are exquisitely done, led by violinist Pierre Colombet’s pristine solos.

There’s no letup in their take on the trio of “Razumovsky” Quartets (op. 59). The F-major is soaring and characterful. In the E minor, the Ébène ably shifts between the music’s graceful, flowing lines and snapping rhythms, never losing the melodic line in the process (the slow movement features more radiant solos from Colombet). A borderline frenetic finale aside, the C-major no. 3 is marked by a strong sense of shape and direction.

The “Harp” Quartet is likewise well etched and the F-minor (op. 95) grippingly diabolical.

For the concluding “late quartets,” the Ébène, again, demonstrates a wonderful feel for Beethoven’s writing, both technically and expressively.

Their reading of the E-flat-major (op. 127) is rich-toned and noble, its slow movement impeccably paced, and the finale’s coda nicely directed. Op. 130 culminates in a slashing account of the “Great Fugue” (no picturesque replacement finale here!), while the towering op. 131 is marked by a wonderful sense of space and feeling for textural clarity married to an elemental sense of drive.

Spaciousness and fine balances mark the Ébène’s op. 132 (especially its central Heiliger Dankgesang), while op. 135 caps the proceedings with fleet exchanges of lines in the outer movements and a lush account of the gorgeous Lento.

In all, then, Beethoven Around the World proves a grand accomplishment, brilliantly played and deeply felt; in a word (or two): one of this anniversary year’s few, true benchmark releases. 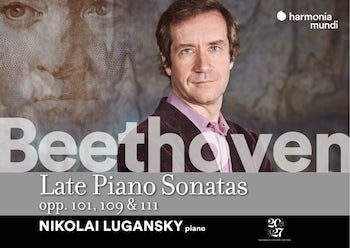 Lugansky’s playing is always cleanly voiced and full of character. Just listen to the big dynamic contrasts of the op. 101 finale or the bumptious account of the op. 109 finale’s fughetta (not to mention the finely balanced and smartly paced transition into the trilled section of the latter) for exquisite demonstrations of Beethovenian pianism.

There’s plenty of rhythmic brio to be found in his readings, too. The outer thirds of the op. 101 second movement snap strictly, as does the pseudo-Baroque introduction to op. 111’s first movement.

And his technique never fails to impress. Even the thickest of Beethoven’s textures – like the dense left-hand chords at the op. 101’s first-movement apex or the mighty bass line in op. 111’s opening movement – speak clearly, and the music’s contrapuntal lines are beautifully weighted.

Where this album is a bit wanting pertains to matters of sonority and phrasing.

Throughout, Lugansky’s playing sounds a bit chilly. This proves most problematic in op. 111, where greater suppleness of tone (as well as rhythmic flexibility) would likely have resulted in a more poetic take on, especially, the great finale. That’s also a present, but lesser, issue in the other works.

In the end, Lugansky’s performances don’t want for energy or intensity. But they burn hot like the white flame in a gas lamp, rather than a raging bonfire.