One of Vasily Petrenko’s most successful Elgar releases; Crouch End Festival Chorus’ performance of Britten’s Saint Nicolas is emotionally gripping; Quartetto di Cremona’s new album is nothing if not overflowing with Mediterranean personality. 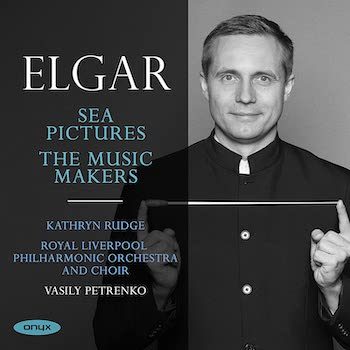 Vasily Petrenko’s Elgar releases with the Royal Liverpool Philharmonic Orchestra (RLPO) have been all over the map. This latest, consisting of a pairing of the song cycle Sea Pictures and the 1912 oratorio The Music Makers, ranks among the successful efforts.

In Sea Pictures, Rudge’s execution of the solo line is ever-characterful and her diction faultless. The central “Sabbath Morning at Sea” receives a grand, beautifully-felt reading while the concluding “The Swimmer” features a blend of emotional fervency and tonal precision that’s entirely on-point.

Petrenko draws accompaniments from his forces that are always lucid and delicate – harp and percussion shimmer in the opening “Sea Slumber Song” while the sense of atmosphere in “Where Corals Lie” is never short of riveting. One might quibble about the omission of the obbligato organ part in the finale, but that absence is more than made up for by the expressive intensity and rhythmic pop of the larger reading.

There’s a similar sense of dynamism and sweep to Petrenko’s take on The Music Makers. A setting of Alfred O’Shaughnessy’s eponymous poem and brimming with quotations from Elgar’s oeuvre, it’s a sprawling, if somewhat peculiar, essay. The present performance doesn’t lack for warmth or momentum – the orchestral introduction offers plenty of both – nor are there many issues of balance and/or style.

Indeed, Petrenko has a solid handle on the proceedings: the music’s contrapuntal lines all speak clearly, nothing lingers unnecessarily, and he never underlines the connections between motives and self-quotations too heavily; his approach feels about as subtle and light-handed as one might want.

The singing, from Rudge and the RLPO Choir, is likewise fine. Balances between voices and instruments is never an issue, even in big moments like “We, in the ages lying.” The big climaxes come across richly: the apex of “They had no vision amazing” is both thrillingly in-your-face and consistently well-blended between solo and chorus. And the quieter moments – like the tripping “But we, with our dreaming and singing” – provide a counterbalance of lilting innocence.

In all, then, a fitting and fine recordings for both pieces. 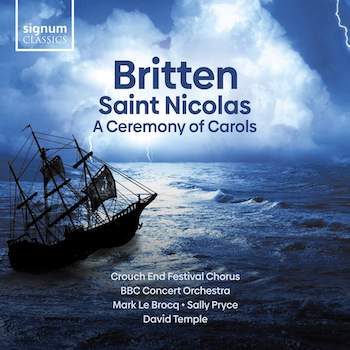 The pairing of Benjamin Britten’s cantata Saint Nicolas with his Ceremony of Carols is fairly common. Yet there’s a freshness to the performances the Crouch End Festival Chorus and BBC Concert Orchestra (conducted by David Temple) deliver in their recording of both works that’s special.

Much of this owes to the purity of the Chorus’s and soloists’ singing in both pieces.

There’s an edge to this performance of Saint Nicolas, for instance, that is both emotionally gripping and seems perfectly fitting for a piece written for a mix of amateur and professional musicians. So the children’s chorus in “The Birth of Nicolas” ably captures the exuberant spirit of Britten’s writing. The scene of “Nicolas from Prison” is focused and driven while the episode of “Nicolas and the Pickled Boys” proves dramatically affecting.

At the same time, the combined forces ably draw out many of the subtleties in Britten’s writing. The “Journey to Palestine” features playing and singing of real atmosphere, from the swaggering, intense storm scene to its cathartic resolution. Voices are nicely blended and closely attentive to dynamic nuance in the penultimate “His piety and marvelous works.” And the two movements culminating in hymns – “Nicolas chosen Bishop” and “The Death of Nicolas” – are both very strongly done; the fugue in the former is vigorously shaped.

Tenor Mark Le Brocq brings a bright tone – as well as excellent enunciations of text and terrific intonation – to his title-role solos. More than once, in fact, his singing calls to mind that of Britten’s muse and partner, Peter Pears.

The Ceremony of Carols that completes the album is similarly strong and lively. All of the solos are cleanly done and the blend of voices within the Chorus is always precise. Of particular note is a fiery account of “This little Babe” and a perfectly unaffected duet in the short “Spring Carol.” Sally Pryce dispatches Britten’s harp writing with color and aplomb. 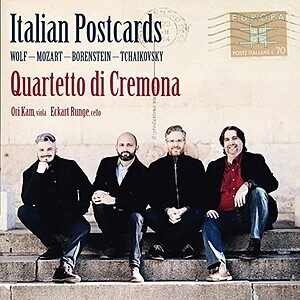 The Quartetto di Cremona’s (QDC) new album, Italian Postcards, is nothing if not overflowing with Mediterranean personality: that aspect of their playing is impossible to miss.

The group’s account of Hugo Wolf’s Italian Serenade, for instance, which opens the disc, is as warmly engaging and playfully sensuous as one might want. The QDC tackles the music’s unpredictable chromatic turns with brio, their lissome ensemble is bracing, and the carefree energy of their reading palpable.

Similar direction and purpose marks the QDC’s performance of Nimrod Borenstein’s Cieli d’Italia. A seven-minute homage to the Italian sky, it’s a packed essay: brimming with rhythmic and melodic layering, atmospheric figures (like arpeggios and swift scalar runs), and subtly-developed gestures, the score sounds a bit like a 21st-century update of the Wolf. And, with its marriage of familiar and strange sitting so closely side-by-side, maybe it is. At any rate, the QDC executes it all with brio.

Filling out the recording is Mozart’s String Quartet no. 1 and Tchaikovsky’s Souvenir de Florence.

The Mozart, written during the teenaged composer’s visit to Italy, is a largely forgettable work, though the QDC’s performance is lean and directed, with the second movement’s bravura passagework standing out for its precise realization.

Tchaikovsky’s Souvenir, on the other hand, is a masterpiece; here the QDC is joined by the Jerusalem Quartet’s violist Ori Kam and the Artemis Quartet’s cellist Eckart Runge.

Interpretively, their reading doesn’t lack for breadth or clarity in the big opening movement. The lovely second sings with winning fluency while the lithe central section of the third dances with balletic vim. The group’s lyrical take on the finale under cuts some of that movement’s natural exuberance, though the coda drives energetically enough.

Throughout the Tchaikovsky – and to a lesser degree in the Wolf – there’s a periodically chilly edge to the ensemble’s tone. Whether it’s an engineering issue or something else is unclear. Either way, that’s the only blemish on this smartly-programmed, stylishly-played disc.