A roundup of fresh performances of Beethoven Concerti. 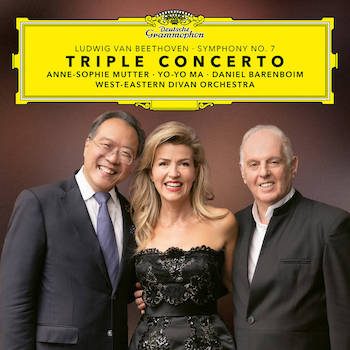 Granted, Mutter and Ma have recorded this piece before (in the ’80s with pianist Mark Zeltser and Herbert von Karajan conducting the Berlin Philharmonic), and that album (also on DG) might be preferable. But the pair exhibit a fresh and spontaneous rapport in the current live performance that’s really captivating. They’re almost flawlessly matched in their articulations and vibrato in the big first movement. And the slow second is played with a lyrical radiance that’s almost competitive: who can play their part with more glowing soul – Mutter or Ma?

As a result, Barenboim sometimes seems like a third wheel (that’s not helped by DG’s engineering, which places his keyboard a bit too far back in the mix of soloists). That said, his playing seems perfectly content to cede the spotlight to the string superstars in the first two movements: it’s rhythmically tight and, besides, the piano part is more accompanimental than not in those movements. What’s more, his playing in the Triple Concerto’s finale really kicks. Indeed, in that movement there’s no lack of fireworks between all three of the soloists.

The West-East Divan Orchestra acquits itself impressively in the score’s handful of orchestral solos: the introduction to the first movement is genial and elegant, while the orchestral interludes in the finale drive with conspicuous athleticism. One might want a bit more flexibility in their first-movement accompaniments – there’s an occasional tentativeness in the orchestra’s responses to the soloists’ frequent rubato gestures (perhaps a result of Barenboim performing as soloist as well as conducting) – but that’s a small complaint given the excellence of the overall reading.

The Orchestra also turns in a strong rendition of Beethoven’s Seventh Symphony to fill out the disc. Barenboim’s interpretation is largely straightforward, if sometimes heavy-handed (the ostinato just before the end of the first movement has nearly all the tension broadened out of it). But where the music needs to drive, it does, and the woodwind playing in the Scherzo is particularly dazzling. 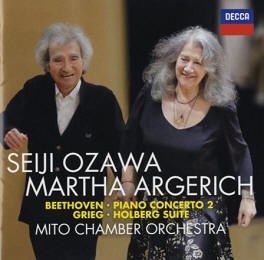 There’s a similar mix of elegance and spirit to be found in Martha Argerich’s account of Beethoven’s Piano Concerto no. 2, in which she’s joined by Seiji Ozawa and the Moro Chamber Orchestra (MCO). Her performance offers much of what we’ve come to expect from the brilliant pianist: a strong sense of character and personality in the big first movement; serene, beautifully voiced phrasings in the slow second; and a momentous finale that’s highlighted by some crystalline articulations of the running keyboard lines.

Indeed, the reading is anything but complacent. The score’s inward moments are tenderly done and, throughout, Argerich and the MCO are clearly playing from the same interpretive page. If the live sonics are a bit too bright and harsh, this is a recording that at least captures the electricity of the event.

The rest of the disc seems to build on the Concerto’s classical origins.

Ozawa leads the MCO in a charming (if sometimes literal) account of Edvard Grieg’s Holberg Suite. The “Sarabande” is conspicuously well-directed, while the “Air” exudes a pleasing warmth.

In between comes a big-boned rendition of the first movement from Mozart’s D-major Divertimento (K. 136). Ozawa and his players capture some of the music’s genial temperament but, overall, the MCO’s sound is beefier than really benefits the Mozart’s limber textures. 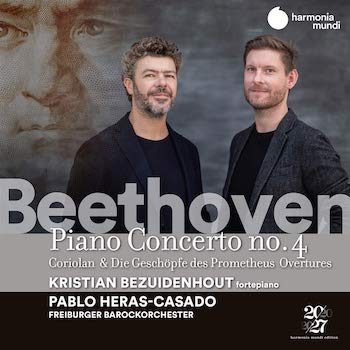 One of the pleasures of this Beethoven anniversary season has been the series of concerto recordings fortepianist Kristian Bezuidenhout has been churning out with Pablo Heras-Casado and the Freiburger Barockorchester. Their latest installment is a wonderfully improvisatory-sounding account of the Piano Concerto no. 4 paired with a couple of Beethoven overtures.

Bezuidenhout’s playing (like Argerich’s above) wants nothing for spirit and personality. He shapes the Concerto’s big first movement with a strong attention to the score’s bracing exploration of space and color. There’s also a terrific sense of dialogue to be had – both between the keyboard’s lines and between soloist and orchestra.

In the “Orpheus Taming the Furies” second movement, Bezuidenhout’s responses to the orchestra’s snapping statements are about as soothing and elegant as can be imagined; surely, this is as focused a reading of this movement as I’ve heard this year.

The finale is an exuberant, off-kilter affair, with some really vigorous exchanges to be had between the soloist and the Freiburgers.

Tempos and balances are well judged and HM’s engineering ensures about as full-bodied a sound for a period ensemble as we can expect.

The filler isn’t bad, either. True, this Coriolan Overture doesn’t burn quite as hot as some modern-orchestra renditions. But rhythmically, it’s plenty taut. And The Creatures of Prometheus Overture that completes the album is certainly a vigorous addition to the recorded catalogue.