Unpacking Felicia Angeja Viator’s work on the history of Gangsta Rap leads to some trenchant observations about American culture — past, present, and under the pandemic. 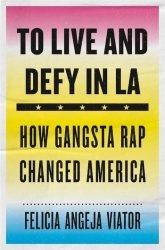 After a much-needed summer break (pandemic style), Deanna Costa returns to hosting The Short Fuse Podcast. Season three opens with an incisive conversation with professor and author Felicia Angeja Viator. The two discuss Viator’s new book, To Live and Defy in LA: How Gangsta Rap Changed America (Harvard University Press, 2020). (Here is the Arts Fuse review.) Unpacking her work on the history of Gangsta Rap leads to some trenchant observations about American culture — past, present, and under the pandemic. Her diverse experiences and extensive knowledge of Hip-Hop (as a historian, professor, DJ, and Bay Area native) shape a valuably multifaceted view of race, politics, culture, and music

Upcoming episodes this season will feature topics such as the 2020 MTV Video Music Awards, updates from former podcast hosts Matt Hanson & Lucas Spiro, a State of the Arts with Fuse Founder Bill Marx, and so much more…we’re back!