You are here: Home / Books / Poetry Review: Henri Cole’s “Blizzard” — Writing as an Act of Revenge

In Henri Cole’s best poems, the outside and the inside interpenetrate and merge. 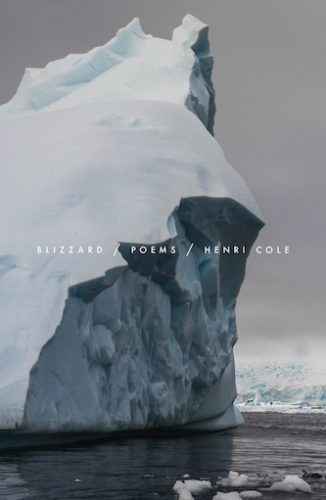 The most incongruous words in the opening poem of Henri Cole’s Blizzard–“Face of the Bee,” a loose, unrhymed sonnet of the kind made fashionable by Robert Lowell in the early ’70s–fall in its 12th line: “cisgender male.” They plant a flag that signals two very different elements in this  book.

One element is the introduction of gender and sexuality as a current or undercurrent running through many of the poems, right to “Gay Bingo at a Pasadena Animal Shelter” on the very last pages, wherein he writes, “I think maybe my real subject is writing as an act of revenge / against the past,” a past in which “we did what others told us / and kept this hidden.” But Cole’s sexuality is actually a subset of mortality, the fact of not just human bodies, but animal, vegetable, and even fungal kingdoms. “Like flesh, or consciousness inhabited  / by flesh, willful, bold, très chic, the skin / on your gelid body is brownish from age / and secretes viscid slime from your flat / muscular foot” is addressed “To a Snail.” And at another point a ” dense, ball-shaped, // branchy shrub, / with lacy florets, / seemed to represent / the puzzlement of dying / in order to live.” The best of these poems, among them “Paris is My Seroquel” (yes, I had to look it up, too) lift up and celebrate this mortality:

I, who am normally so restrictive,

except in relation to him I once loved

(worn and dangerous now), each day,

kneeling down as some strange energy

penetrates my forehead, I, striving to draw

nearer to you, and to your stones, without nervousness

or regret, as all the beauty of the world

seems to touch my haunches and hooves.

The other element that “cisgender male” flags is the first of a great many intrusive adjective-noun combinations, mostly in the faux sonnets that make up a great deal of the collection. Most of the better, stronger, and more interesting poems are those that don’t fit the form, but go their own way. The weaker ones scatter the two-word combinations along one after another in a rocking litany: fatigued thought, bad spots, good things, tall pines, seeing eye, gelid body, viscid slime, wet road, dark stone, long game — we’ve barely got started in the book, and I’ve not included strings of adjectives more than one at a time, or a few that are far more obviously to the point. Enough said.

When Cole is not striving (it seems) to fill out a line or a form, he allows himself a different kind of energy. The longest poem in the book, “Land of Never-ending Holes,” perhaps the most powerful in Blizzard, hasn’t a single wasted word:

See out there beyond the ash, avocado, lemon, and peppertrees,

but also there are bee spawn, motion dazzle, and maple syrup.

I don’t want you to leave.

In Cole’s best poems, as in a successful Frank Lloyd Wright house, the outside and the inside interpenetrate and merge. In “Departure,” its perspective from inside an airplane being deiced, the narrator observes a doe and a buck. “Beyond the tarmac barrier…they face me as I face them,” he writes, forgetting that they are not facing him at all — he sits behind several layers of distance. In fact, as he projects, he is unsure  of their relationship to each other: “She seems to be only partially certain / he cares for her as she cares for him.” Then the plane rises into the clouds. Even as he recedes farther and farther into the air, the speaker reaches for something else: “If tenderness approaches, run to it.” But how?

The poem from which the book takes its title is equally unstable. “I need everything within / to be livelier…. but memory of feeling is not feeling, / a parasite is not the meat it lived on.” It would seem that language cannot resolve, cannot bridge, cannot heal. Nevertheless, the poet goes on, as he began, “metabolizing / life into language, like nectar sipped / up and regurgitated into gold.”