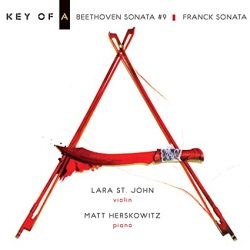 Where does one begin with Key of A, the new album from violinist Lara St. John and pianist Matt Herskowitz that, on its surface, looks perfectly safe but, in practice, proves anything but?

The performances, to start in an obvious spot, are charismatic and full-blooded. That isn’t necessarily surprising, given this duo, but it’s commendable all the same.

In the first movement of Beethoven’s A-major Violin Sonata no. 9 (Kreutzer), St. John and Herskowitz dial up the intensity meter to 11: theirs is a decidedly lean, edge-of-the-seat account, one that’s emphatically unsentimental but never emotionally chilly (as St. John’s portamenti in some of the lyrical passagework attests). The central variations overflow with character while the team’s freewheeling, exuberant reading of the finale comes across as a jam session–like romp.

A similar energy level marks their take on César Franck’s Violin Sonata, which follows the Beethoven. Here, the music’s turbulent undercurrents showcase Herskowitz’s musicianship brilliantly: his execution of second-movement keyboard fingerwork, for instance, is nothing short of astonishing. And St. John dispatches the violin part with color and fervency.

So far, so good. Interpretively, though, the disc holds some surprises.

In both sonatas, St. John and Herskowitz take certain liberties with the printed score. The variations movement in the Beethoven, for instance, is full of embellishments – octave displacements, decorations and reworkings of the melodic writing (mainly in the piano part) on repeats, and the like. So, too, parts of the Franck (particularly in the finale).

Is any of this necessary? No: neither piece demands such changes. Do they detract from the performances? Not really: both players are so in tune with the stylistic language of what they’re playing that these variations fit with the spirit of the music.

So, should everyone follow suit from here on out? No way. The first rule of arranging is that the finished product should be as good as (if not better than) the original. To my ears, these tweaks do just that. Of course, if the rest of St. John’s and Herskowitz’s interpretations – their compelling sense of the line; of feel for phrasing, structure, musical style and architecture – weren’t so convincing, maybe I’d be singing a different tune. But they are, so I’m not.

Rounding out the program is a charmingly whimsical account of Fritz Kreisler’s Schön Rosmarin, done up here in a semi-jazzy guise that marries the Teutonic and Gallic influences that preceded it: a fresh, tangy cap-off for an impressively original release. 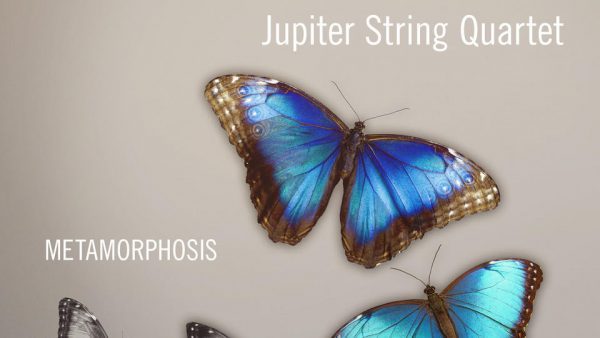 The highlight of Metamorphosis, the Jupiter String Quartet’s (JSQ) new album, is the ensemble’s wild, kinetic account of the title track, György Ligeti’s String Quartet no. 1. Written in the early ’50s, it ranks among the most insanely challenging pieces to pull off, technically and expressively. Not only does the JSQ manage those demands, but they make the piece sound utterly natural and effortless.

Theirs is a reading marked by spot-on intonation and a terrific sense of atmosphere that combines with an attention to rhythmic detail and textural balance that, simply put, is gripping. Throughout the 20-minute-long score, its process of thematic transformation (or metamorphosis, to use Ligeti’s subtitle) is clearly presented and given its emotional due.

Indeed, each of the Quartet’s several connected movements has its own distinctive character, and these, together, play off one another to add up to an absorbing whole. To be sure, the score’s last two big sections – the buzzing “Prestissimo” canons and “ironic” echoes calling out across the ensemble through a web of hazy, natural harmonics – are superb: done here as well as anywhere.

In all, this is a tremendous Ligeti performance: a testament both to the JSQ’s formidable chops and their impressive rapport as an ensemble.

The remainder of the album is given over to Beethoven’s C-sharp-minor String Quartet no. 14, op. 131. There’s much to admire within the performance, including a fluent, directed reading of the central variations and a bracingly articulated scherzo.

Yet the weightiness of the outer movements too often gets the better of the group. Shapely as the first is, the music never quite breaks out into song. And, though the finale drives tautly, it still feels a mite held back against its will.

That said, this isn’t a bad Beethoven op. 131, by any means. It’s just nowhere as compelling as the Ligeti with which it’s paired. 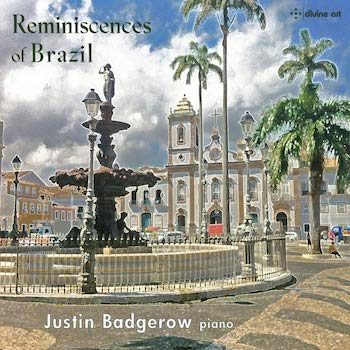 No two ways around it: Justin Badgerow’s Reminiscences of Brazil is a thoroughly appealing release. A survey of mostly 20th-century solo piano music from Brazil, the selections want nothing for stylistic diversity, melodic invention, and rhythmic verve.

About half of the disc’s playtime is devoted to music by Heitor Villa-Lobos and Darius Milhaud.

Badgerow’s performances of four of the latter’s Saudades do Brasil – “Copacabana,” “Sorocaba,” “Sumare,” and “Ipanema” – run the gamut from dreamy to raucous.

In Villa-Lobos’s Bachianas brasileira no. 4, Badgerow ably draws out the opening movement’s mighty climaxes but never at the expense of the musical line. The second, with its imitations of chiming bells, is beautifully structured. The pianist’s sense of pacing and balance of voicings is most impressive in the third movement Aria, while the final “Dança” is vigorously done.

The remainder of the program is devoted to music by Francisco Mignone, Paulo Gondim, and Mozart Camargo Guarnieri.

Mignone’s 1932 Seis Preludios are a welcome discovery, mixing as they do atmospheric gestures (in no. 1), taut rhythms (no. 2), stately lyricism (no. 4), and a condensed rhapsodic structure (no. 5). Similarly fetching are Mignone’s graceful Valse Élégante and pulsing Congada.

While the Villa-Lobos and Mignone pieces sometimes straddle the line between the worlds of high art and popular Brazilian musics a bit starkly, the Gondim works don’t.

Gingado is spirited and ebullient. In the lush, lyrical Sonhando, the opening figure seems to channel Lerner and Loewe’s “Almost Like Being in Love.” Sapeca is a playful romp; Fim de tarde em Amargosa a flowing nocturne; and Teimosia proves spunky but elegant.

On the whole, then, these are stylish, sympathetic performances of ingratiating and engaging repertoire. Badgerow clearly has the measure of the music and a strong understanding of how to convey its subtleties: you’re in excellent hands here.

My only reservations about the disc owe to a combination of its engineering and the instrument Badgerow’s playing on. To put it simply, the piano sounds a bit distant and lacks a degree of tonal variety that would be particularly welcome between, say, the Villa-Lobos and Gondim selections. Of course, that may just be a personal bias and it shouldn’t put you off investigating what is a finely curated and played survey of some wonderful music.