You are here: Home / Featured / Rap Album Review: MIKE takes on the “Weight of the World”

Barely beyond his teenage years, MIKE still has a lot to discover about himself and the world. But he seems undaunted by the task, moving through this recording with pride and self-assurance. 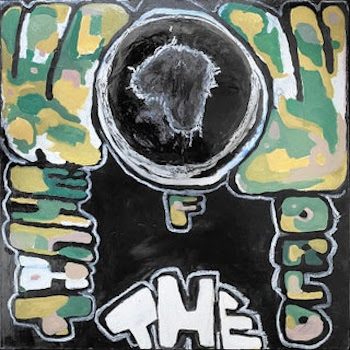 Rapper MIKE isn’t done with grieving. On 2019’s Tears of Joy, he mourned the loss of his mother. Despite his misery, MIKE vowed to keep living and learning. A year later, the New York-based, UK-raised rapper still hurts, but he is determined to persevere. On Weight of the World he is still exploring his depression — and substance abuse — through dark, sometimes inscrutable vignettes leavened by moments of hard-won wisdom.

MIKE, whose real name is Michael Bonema, continues to perfect his art, rapping in a deep, full baritone that can evoke both immense pain and pride — often in the same line. He has carved out a niche for himself by carrying on the torch of storytelling-based New York rap, though taking the genre in a more experimental direction. Bonema is in full control in Weight of the World: he produced most of the tracks under the pseudonym dj blackpower. The sound is idiosyncratic, filled with glitchy, frantic, emotionally pertinent beats drawing on samples from a wide range of genres.

The music can often feel unstable or disorienting, but MIKE always seems self-assured, his vocals flowing with a matter-of-fact, even meditative, power. You can hear that composure on the track “Weight of the Word*.” The first half of the song uses a vocal loop that feels like a cry for help. Over it, MIKE raps about dodging phone calls and drinking away his problems. Jarringly, the second half  cuts to a busy, up-tempo loop where he forcefully declares, “And you still grieving over moms, no I’ll never forget.” MIKE takes the switch in beat in stride, writing lines whose emotion parallels  the track’s instrumentation. The result is a song that divides into two distinct parts; the second half had been previously released as the teaser single “Nothin’ 2 Say (Never Forget).” When the two parts are combined, a single, though still fragmented, story is told. MIKE’s natural talent and flow tie the two halves together: he provides consistency to what would otherwise be a disorienting track.

The album’s brash opener, “Love Supremacy,” uses a high-pitched, abrasive sample to create a tense atmosphere. MIKE comes out swinging, revisiting his brushes with mortality — “took another slash, lookin’ for my mother’s casket” — and counting his blessings: “I got my mother’s laugh, grinnin’ through a bunch of bad shit.” The tone shifts toward exhaustion on “Alert*,” in which he acknowledges, “It’s doom that I need to work through,” before admitting, “Don’t think my conscious got the room.” This despair remains in “Coat of Many Colors,” when Bonema raps, “And they said I’m meant to shine but I’ve been feelin’ dormant.” He may be struggling through stasis, but MIKE continues to trudge forward — he is determined to face the mourning process head on.

On “222,” produced by Chicago singer and producer KeiyA, MIKE takes listeners into the room where his mother died: “I walked her out the earth, just me, a couple nurses.” It’s a memorably lonely image, a traumatic memory of loss. At times, like on “Iz U Stupid,” the performer laments this isolation, asking, “Where was you when I sat in the rain?” His distinctive mic etiquette on this song — he seems to be whispering directly into the listener’s ear — creates an unsettlingly intimate experience. Of course, MIKE wants to make you uncomfortable. Change and loss are nothing if not challenging. On the unnerving “Get Rich Quick Scheme” he raps over erratic, warped horns, “The only thing that I inherited was blocking help/It’s part of pop’s concern/Remember cringing at the mirror I was not myself/It’s still a lot to learn.” As difficult as solitude may be for MIKE, it also seems necessary. His bars are introspective and honest, and to make that work he needs to be self-reliant — there are only two guest appearances on this 16-track album.

One of those comes on the closing track, “Allstar,” where MIKE shows signs of finding his existential footing. He triumphantly proclaims “You know who we are, gotta keep barkin’” and “You know the team stars” before he hands the album’s final verses to friend and collaborator Earl Sweatshirt. Earl begins with a line relevant to the times: “I shot the sheriff, don’t expect to get no calls from him.” Later on, he elaborates on his rage, rapping “Water spilling out the Flint faucet, toxic.” He goes on to talk about changing the system. Sweatshirt advocates that it’s “time to organize, keep it horizontal,” and advises “They only tall from the stilts down.” He ends his verse and the album by underlining a sentiment that winds like a connecting thread through most of the album’s tracks, signing off by saying “I’ma leave proudly.” The beat abruptly cuts out and 22 seconds of silence follow.

Barely beyond his teenage years, MIKE still has a lot to discover about himself and the world. But he seems undaunted by the task, moving through this recording with pride and self-assurance. You get the sense that MIKE is ready to take on the weight of maturity. No matter how hectic or confusing a setting he may find himself in, his delivery remains grounded. Somehow, he is going to make it through, and that will be because of his ability to look inward with emotional intelligence, embrace his pain, and love his mother long past her time on this earth.

Gabriel Sherman is a student and writer from Brookline, MA, currently studying History at Pitzer College.