This is an intelligent, inventively performed, be-boppish tribute to a composer I now know better than ever. 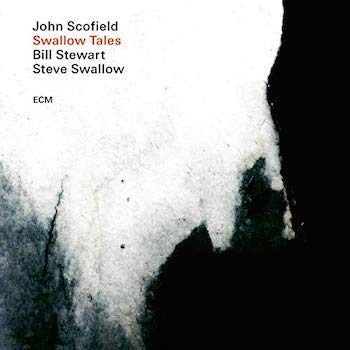 On the 1967 RCA Victor album Lofty Fake Anagram, vibraphonist Gary Burton recorded “Good Citizen Swallow,” “in honor of his bassist Steve Swallow.” Most bassists could be described in similar terms: they have chosen an instrument that, in jazz, is usually supportive and sits in the background. Bassists routinely tell jokes about people chatting throughout their instrument’s solo. In contrast, for almost 60 years, Swallow has been far more than a figure in the background. As we hear on the new trio album, John Scofield’s Swallow Tales, Swallow is one of the most versatile, and satisfying, bassists around. He is also a quirky and thoroughly appreciated composer, whose pieces have been played by Burton, of course, but also by Chick Corea, Carla Bley, Bill Evans, Art Farmer, and others.

His musical experience is both varied and distinctive. He’s been a treasured member of trios led by Jimmy Giuffre, Steve Kuhn, Paul Bley, and John Scofield. His relationship with Burton is legendary: they were in the Stan Getz group together. He was the bassist of the Art Farmer Quartet that included Jim Hall, and has recorded with Bob Moses, Lee Konitz, Stan Getz, and, most recently, in 2019, with pianist Jamie Saft. As if that wasn’t impressive enough, Swallow maintains a long-standing musical relationship with Carla Bley. In 1988, they made an album, Duets: Carla Bley/ Steve Swallow. Since then, their careers have tended to merge in a most productive way. I am only skimming the surface; this is a recording career that began in 1961. It’s almost incidental that along the way, among the many challenges, he has created a distinctive contemporary jazz style on the electric bass.

Judging from his music and his titles, he has a wry sense of humor. I first became aware of him as a composer when Burton recorded his “General Mojo’s Well Laid Plan,” an instantly endearing and memorable composition found on Burton’s Duster. His compositions are witty, as I’ve said, but also a bit romantic. He’s not been exactly neglected as a composer, but his writing would seem to require a special taste. Thankfully, some of the greatest jazz musicians share that taste. Lee Konitz recorded Swallow’s “Eiderdown,” and Bill Evans, Chick Corea, Pat Metheny, Burton, and Lyle Mays have recorded his “Falling Grace.” Still, he should be better known as a composer, which makes John Scofield’s Swallow Tales, a session made up of Swallow compositions, an album to welcome. Scofield met Swallow when they were both at Berklee College. I don’t know when the guitarist started playing Swallow’s pieces, but he knows them sufficiently thoroughly to have made this recording over the course of one day.

Who else would have written a piece called “Awful Coffee”? It comes in four parts. Its main theme is a slow, disconsolately descending line that presumably brings us down to the dregs. Delightfully, Scofield picks the mood up in his improvisations, with cleanly stated lines that seem to breathe naturally over Swallow’s bass accompaniment and the active drumming of Bill Stewart. The band’s version of “Falling Grace” begins with a few bars of Stewart’s drumming before Scofield plays the melody in a curiously reticent way. Again, what is striking about his improvisations is the clarity of his phrases, their natural yet varied length buoyed along by gently swinging rhythms. The performance is playful, from end to end. “Eiderdown” proffers an ascending opening phrase that sounds almost like humming. The set begins with the beautiful ballad “She Was Young,” originally set to a mini-poem by Robert Creeley, and the album ends with the complicated-sounding “Radio.” This is an intelligent, inventively performed, be-boppish tribute to a composer I now know better than ever.