You are here: Home / Books / Book Review: “I Belong to Vienna” — The Merit of Not Doing the Wrong Thing

The value and virtue of I Belong to Vienna is that it personalizes and humanizes a global reign of terror into an understandable drama.

I Belong to Vienna: A Jewish Family’s Story of Exile and Return by Anna Goldenberg. Translated from the German by Alta L. Price. New Vessel Press, 207 pp. $16.95. 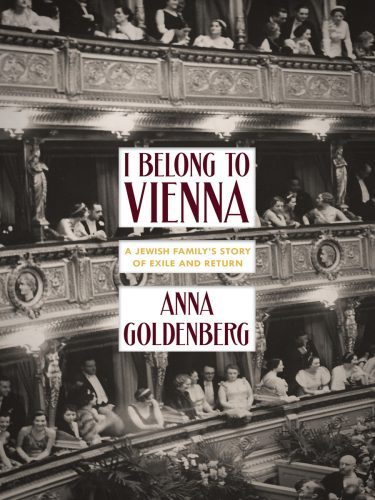 The German invasion of Poland in September 1939, which began World War II, was preceded by a less violent incursion into Austria which was, ostensibly at least, done with the consent of the Austrian people. Hitler was Austrian by birth and had long desired Austria to become part of the new German nation he created. A month after German troops entered the country there was a plebiscite in which Hitler claimed Austrians approved the union by 99 percent. This was after he had originally rejected the idea of a referendum saying it would be a “forgery.” (He didn’t say “fake news” or “illegal immigrant voting” as far as we know.)

The Austrians welcomed the Germans with open arms, being assured that it was only the logical union of two German-speaking countries into one common “Volk.” The fate of the Jews then followed a typical Nazi pattern: disenfranchisement, exclusion from civic life, confinement to Jewish areas, forced emigration, and finally roundup and removal to death camps.

A new memoir by the granddaughter of Viennese Jews of that era sheds light on how the cruelty of the Germans and the complicity in it by the Austrians played out in intensely personal ways. It is history at eye level; this examination of the day-to-day sufferings of individual persons underlines the horrors of a racist campaign, an eradication the Nazis planned and almost completed.

Anna Goldenberg’s family were of the middle class who lived in decent apartments, owned businesses, and produced a few physicians. They had felt safe and at home in Vienna where there were 80,000 Jews before Germany began its racial policies there. The story is told through her grandparents, Hansi Bustin (1925-1996) and Helga Pollak Bustin (1929- ), who managed to survive the Holocaust, move to America after the war, and after doing their medical internships in New York, moved back to Vienna. This reimmersion into the world they left is a major part of the story, for it perplexes most people who hear it. Why would any Jew want to return to the devil’s den, the place of their near elimination?

Granddaughter Anna, who was born in Vienna but came to New York to study at Columbia, wrote that when people here learned she was Austrian, she had to tell them she was Jewish, “to reassure them my ancestors hadn’t committed war crimes. They were astonished: What? There are still Jews in Austria?” When she tells them that her grandparents had moved back, they were even more astonished. “How could they live in a country where they had been treated so terribly?” It implied they must have been lacking in any pride or courage to leave forever. At least one person commented to Anna that “many stayed for financial reasons,” in a way she found condescending. In the end, it was a question of who they felt they were: they were proud to be Viennese and were not going to be deprived of that. For them to deny this identity was conceding the point to der Fuehrer.

Daily life changed from the beginning of Nazi rule. At first it was restrictions: Jews were fired from their government jobs and denied permission to work in the professions except to serve other Jews. Then children were forced to leave school, Jews were barred from public places like parks, and employers were prohibited from hiring them unless there were no Aryans available. Finally, the real war against the Jews began, pressuring those with money to leave and then charging them exorbitant fees and taxes to obtain exit visas, as well as confiscating their property outright and evicting them from their homes. In many cases the motive was as much venal as ideological; avaricious neighbors and others wanted to acquire Jewish assets without paying for them. Getting an exit visa and a place to emigrate took up much of everyone’s time. Some eventually gave up on the paperwork because there were far more seeking to leave than there were spaces allotted by other countries. One of Goldenberg’s great-uncles paid a fortune for a steamer ticket to America if he could get to Genoa where the ship would depart. When he arrived there, he found there was no such vessel, no such voyage. The opportunities for swindlers to prey upon the helpless were nearly unlimited.

One salvific story, however, restores our faith. Hansi was taken in by a non-Jew, Josef “Pepi” Feldner, a doctor, and lived with him rather openly as his “nephew” until the end of the war. Unlike Anne Frank who was forced to live in an attic, Hansi walked about Vienna rather brazenly. He even went to the Vienna State Opera now and again. The Germans conducted raids and checked identity cards, especially at cinemas, so Hansi never went to the movies; the opera, however, drew large numbers of German officers and Austrians were only given standing-room tickets. Hansi’s identity was never checked there, apparently because the Germans never even stopped to imagine a Jew coming to a place swarming with uniformed men. It has been estimated that for every Jew who was saved, perhaps seven people were wise to the concealment or ruse. Many of Pepi’s friends knew about Hansi, but did not give him away. One of the mental exercises necessary for survival was knowing who your friends were; that often meant giving everyone you were ever acquainted with a ranking as to whether they would be more or less likely to betray you, depending on the circumstances.

Nine of Goldenberg’s grandparents’ relations died in camps. Theresienstadt was mainly a labor camp, and Goldenberg relies on memories and writings of her relatives to tell of life there, with all its innumerable cruelties and deprivations. But the healthy who could work got a reprieve; those who could not were sent to Auschwitz-Birkenau, an extermination center. These stories have been told many times, covered in books and documentaries, but the value and virtue of this book is that it personalizes and humanizes a global reign of terror into an understandable drama.

Watching your daily life disappear and knowing your own vanishing could be next occupied one’s consciousness. Many Jews could not believe that a place as civilized as Vienna — where they had lived and prospered for centuries — would actually turn against them. Those who were more realistic did their best to become less visible, as they determinedly labored to find a way out.

The ones who survived discovered value in merely existing without thought for wealth or fame; to be, after all this, was enough. When Pepi died in 1973, Goldenberg’s family suggested having a tree planted along the Avenue of the Righteous in Jerusalem, a place to honor those who had rescued Jews during the Nazi persecution. Goldenberg says he would not have wanted this: “He found such sentimental gestures offensive. To Pepi, what he had done was self-evident. Why should he be honored for not doing the wrong thing?”