Dirt has the unsurprising effect of making you hungry; if your mind wanders as you are reading, you’ll probably find yourself thinking of food.

Dirt: Adventures in Lyon as a Chef in Training, Father, and Sleuth Looking for the Secret of French Cooking by Bill Buford. Knopf, 432 pp.$28.95. 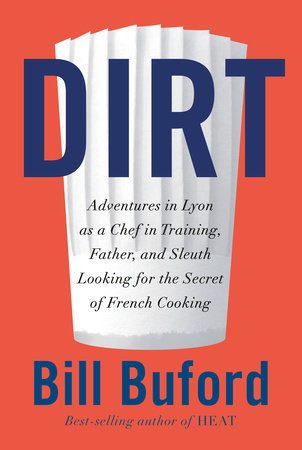 Less than a month ago — even though that seems like years at the moment! — the celebrated restaurateur Sirio Maccioni passed away. Maccioni was one of the last of a kind: an owner-host whose presence in his dining room defined its spirit. With Sirio in the house, the New York restaurant Le Cirque sparkled for decades, home to an impressive group of star chefs succeeding one another. His NYTimes obituary ends with a memorable attribution: he’s quoted as having said, “I saw opening a restaurant as serious business — a profession that is respectable if you are stupid enough to do it.”

This sentiment comes to mind this week with the release of Bill Buford’s memoir Dirt. An account of his yearslong adventure among the chefs, bakers, farmers, and other artisans in Lyon, France, and surroundings, it raises one’s eyebrows again and again. While readers may not come away with the thought that you have to be stupid to pursue a restaurant career, it’s likely at least that the word “crazy” might apply? (Yours truly spent years working in the field, eventually as an owner!)

Dirt follows Buford, once the fiction editor for The New Yorker and author of a previous work about life in New York and Italian kitchens (Heat), as he wings it to Lyon — the renowned gastronomic destination city — with his trusting wife and young twin sons. Winging it indeed: while his literary credentials open doors for him wherever he goes, he arrives on the continent with no set plan. (His wife, Jessica, is some kind of a saint, perhaps more responsible for their adventure than he is. She’s fluent in French, while he knows none of it, all the while raising small twins practically by herself!) Because of New York connections such as Daniel Boulud and Jean-Georges Vongerichten, Buford is granted interviews by top chefs in and around Lyon as he tries to land a job on the line, to become a stagiaire; dismissed by all of them, he settles for work with a leading baker, “Bob,” whose boulangerie, considered the greatest in the city, is across the street from his apartment. Some time is spent baking — sometimes burning — and delivering baguettes with Bob. During this time he meets more local restaurant and farm characters and attends day-off gatherings, such as a pig slaughtering, much of it colorfully laid down.

But because Buford’s dream is to become immersed in French cuisine and technique — the objective being “to get as elemental and primary as possible” — he moves on from the bakery, attending the fabled L’Institut Bocuse culinary school, learning pastry making, deep-diving into fish preparation, and — no aspect of this isn’t exacting — ironing his chef’s coat every day before class. As a season there passes, among quirky younger aspiring chefs, Buford muses on the culture’s nature; there’s an intriguing exploration into whether a lot of what French cooking is known for was actually introduced from Italy. You can tell he thinks it was, but it’s equally certain that nobody else around him agrees! His chef teachers are an intimidating lot: their certainty about — well, everything — is on display as Buford cooks for them during the school exams. They are nerve-racking, but he passes the tests. (You won’t think he will?) Now, with that under his belt, he moves on to the work he’s been waiting for, landing on the staff of one of Lyon’s most venerable kitchens — La Mere Brazier. Again, Buford finds himself in a pressure cooker environment, with cocky prep workers and arrogant lead chefs — moving over time from the lowly peeling and chopping of the gardemanger station to a position cooking the staff meals, then to higher tasks as an official stagiare. Somehow, though he is toiling under nearly impossible men, Buford gains their respect, including a friendship with the restaurant’s leader, and his apprentice term is lengthened.

Because of his ties to Daniel Boulud, who hails from Lyon and visits from New York frequently, Buford’s adventures at La Mere Brazier come to a close. He is enlisted to assist Boulud with a cookbook back in America; later he also produces a BBC documentary about this chapter in his life. By this point we are sated, with so many things richly detailed, whether it’s how to make a perfect omelette or a Béarnaise sauce, or the fundamentals behind cheesemaking. Dirt has the unsurprising effect of making you hungry; if your mind wanders as you are reading, you’ll probably find yourself thinking of food. The book wanders as well. Still, even if it seems that sometimes threads are lost, characters are occasionally left unrealized, and quite a few unanswered questions linger, it may be best to relax and not care. Hopefully the French attitudes won’t irritate (they might!). This is a rambling salute; everything is germane, organic, and mostly pleasant at the least. But you’ve been warned: “crazy” is operative.