You are here: Home / Featured / Concert Review: Singer/Songwriter Michael Kiwanuka — He Will Fill You With Light

Michael Kiwanuka blends singer/songwriter with funk and soul, the energy of Afro-pop with the intensity of psych and prog.

Last night at Royale in Boston, I saw rock and roll’s future and its name is Michael Kiwanuka.

Actually, that’s not true. For one, rock and roll has no future; second, Kiwanuka is so much more than rock and roll — in fact, he might be everything but rock and roll. He blends singer/songwriter with funk and soul, the energy of Afro-pop with the intensity of psych and prog, creating a blazing spectrum of musical emotions and sensations that go from dance to trance at the drop of a hat.

All I know is that this 32-year-old artist from Muswell Hill, England, born to Ugandan parents who escaped Idi Amin’s reign of terror, writes amazing songs and plays them with such deep feeling that when I’m in their grip I just don’t want to hear anything else.

Kiwanuka may not yet be a household name, but many households have heard his music. “Cold Little Heart” from Love & Hate was used as the theme music for the TV series Big Little Lies. On record, the tune is 10 minutes long, with a long slow intro that has become his stylistic trademark. On his latest album, Kiwanuka, which came out last year, two of the songs — including “Hero,” which has gotten some airplay in Boston — have intros that are presented as discrete tracks. In concert, too, many of the songs have lengthy intros and outros; in fact, several times a pause in an outro was taken by the crowd to be the end of the song, prompting applause that subsided when we all realized Kiwanuka and his crack band were still going.

Kiwanuka has credited artists like Isaac Hayes and Funkadelic with inspiring such long, slow, patient musical arrangements. One also readily senses the influence of Bill Withers, Sly and the Family Stone, Bob Dylan, and even Pink Floyd. It’s a broad musical palette that Kiwanuka works from, and he has a master’s touch in blending just the right elements. It doesn’t hurt that he has a very sympathetic band who play both tight and loose with him. The lineup features Michael Jablonka on lead guitar, Steve Pringle on keyboards, Alex Bonfanti on bass, and Graham Godfrey on drums. Then there are the secret weapons: Emily Holligan and Simone Richards on mesmerizing backing vocals, particularly on Love & Hate’s “Rule the World,” where Holligan went to church while Richards supported. 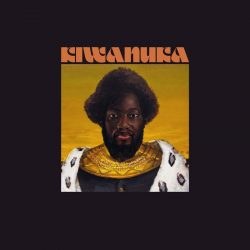 Other highlights included “Light” from the new album with its comforting chorus, “Shine your light over me/All of my fears are gone/And it don’t bother me/If it’s not meant to be,” and the four-song encore set that surveyed all three of  Kiwanuka’s albums, ending with a pair from Love & Hate: the crowd-pleasing “Cold Little Heart” and an extended version of the inspiring title track with its refrain of “You can’t take me down/You can’t break me down.”

All in all, 75 percent of the songs were from the new album, including the first four in a row. That might be risky for many artists, but from the reception Kiwanuka received I would say that the bulk of the crowd agrees with me that his new album is his best yet. I would also say that this would be an ideal time for him to put out a live album because his live show is polished and his rapport with his adoring crowd is apparent, from what I saw at Royale and from recent television appearances on The Ellen Degeneres Show and The Late Show With Stephen Colbert.

Kiwanuka begins a European tour on March 1, which runs though the end of November; that means it will be at least a year before locals have an opportunity to see him again. When he does return, no doubt at a larger venue, I strongly recommend catching the performance. Kiwanuka is an artist to be reckoned with; he has something to say and he will fill you with light.