“Salome” is not the only strong opera based on an Oscar Wilde play. This one-acter by Zemlinsky deserves a place in the repertoire today. 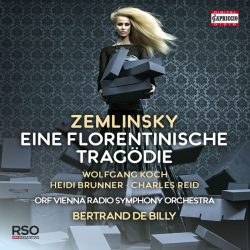 Oscar Wilde was of course an immensely witty and at times profound writer. Many of us probably think of him as an author whose output has little do with the opera house. But one major repertory staple, Richard Strauss’s Salome, uses a play by Wilde, translated into German and somewhat tightened. Another, the one-act A Florentine Tragedy, has been “operatized” by two prominent composers (again in German): Alexander von Zemlinsky and Richard Flury. And a third play, The Importance of Being Earnest, was set (this one in English!) by the Italian-born composer Mario Castelnuovo-Tedesco. Earnest is about to receive its world-premiere recording, by Boston’s own Odyssey Opera. I will be reviewing it here in due time. Meanwhile, The Arts Fuse has kindly welcomed reviews by me of recent recordings of the Zemlinsky and Flury operas. The Zemlinsky is discussed below. For the Flury, click here.

Alexander von Zemlinsky (1872-1942) is a composer who was, for a time, Schoenberg’s teacher, and whose works have come back from near-obscurity. (His sister Mathilde became Schoenberg’s first wife.) I am aware of at least 10 recordings of Zemlinsky’s Lyric Symphony (c. 1922-23), a song cycle with orchestra that is closely comparable to Mahler’s Das Lied von der Erde: like the Mahler, it has a female and a male soloist, sets German versions of Asian texts (in this case poems by Rabindranath Tagore), and uses a rich harmonic language and glitteringly varied orchestral colorations.

In 1916, Zemlinsky, inspired by Richard Strauss’s success with his Wilde-based Salome, turned Wilde’s fascinating one-act play A Florentine Tragedy—A Fragment (1893) into a lively and gripping opera. Zemlinsky prepared the libretto himself, basing it on a German translation by Max Meyerfeld and expanding the stage directions for greater clarity.

Briefly: Simone (baritone), a merchant in 16th-century Florence, returns home, only to discover that another man, Guido Bardi (tenor), a Florentine prince, is visiting his wife Bianca (soprano or mezzo-soprano). The wily merchant offers the prince anything in his household. Bardi asks to have Bianca. Simone leaves the two lovers alone, then returns, fights a duel with Guido, and finally strangles him. Bianca, apparently excited by her husband’s passionate possessiveness, rushes to embrace him: “Why did you not tell me you were so strong?” “Why did you not tell me you were beautiful?” he replies, and kisses her. Curtain.

The music traverses a wide range of moods, reflecting the many different emotions of the three characters. Because the vocal lines are often semi-naturalistic, it is the orchestra that carries the bulk of the mood-setting. A detailed diagram in Antony Beaumont’s masterful book on the composer reveals elements of what we might call a four-movement symphony, matching the phases in the dramatic action, across this nearly hourlong work.

At least five previous CDs have been released over the past 40 years. The distinguished participants in all those recordings (e.g., Doris Soffel on a 1984 recording, and conductor Riccardo Chailly on one from 1996), and the high distinction of the respective labels (e.g., London and EMI), suggest that all five recordings represent the work well. (There seems to be no DVD.) I have read particular praise for James Conlon’s CD, with Deborah Voigt, David Kuebler, and Donnie Ray Albert (which was libretto-less on its first release but now is well provided). Iris Vermillion, who sings the role of Bianca in the Chailly recording, can be heard on YouTube in a complete recording conducted by Armin Jordan here or (with a piano-vocal score you can follow, here).

I can certainly recommend the present rendering. It comes from a concert performance in the Vienna Konzerthaus, presumably the “Grosser Saal,” on May 20, 2010. That hall holds 1,840 listeners — spacious enough to allow a richly orchestrated late- or post-Romantic work to bloom, but not so vast as to prevent the audience from hearing clearly the three singers. This is particularly important in the many passages in which extensive text needs to be sung at a quick, quasi-spoken pace. Bravo to the sound engineers, even with help from the hall, for balancing voices and orchestra so beautifully in a recording made in a single take! The recording can be streamed through Naxos Music Library, Spotify, and other online services; excerpts can be heard on YouTube here and here.

The RSO Wien shows itself off splendidly under Paris-born Bertrand de Billy. The three singers communicate a variety of shifting moods, nearly always maintaining beautiful firm tone — no barking or shouting. The roles of husband and wife in this marvelously wordy opera are taken by native German-speakers: Heidi Brunner, from Switzerland; and Wolfgang Koch, whose part is the largest of the three, from Germany. The American tenor Charles Reid provides a no-less-persuasive reading of the interloping lover Guido Bardi. Reid performed at the Met for nine seasons and—perhaps this suggests that his voice is somewhat compact in size—was recently hired to sing Don José at the thousand-seat theater in the German city of Hagen. He teaches at Andrews University in Michigan.

The booklet essay, in German and generally comprehensible English, is informative but too brief. Even so, it wastes space by giving the synopsis twice, with slight variants, and by making a forced comparison between the “strong man” Simone and some political leaders today. The libretto and a good English equivalent — mainly deriving from Wilde’s original play — are provided, though with a consistent typo in words beginning with fi or fl: when we see “ght” and “aming,” for example, we need to read the words as “fight” and “flaming.”

I recommend this astonishing work — dramatically taut but emotionally expansive, not least in the orchestral underscoring — to anybody who responds well to the operas of such (varied, I realize) composers as Debussy, Mascagni, Richard Strauss, Janáček, Bartók, Korngold, or Hindemith.

Ralph P. Locke is emeritus professor of musicology at the University of Rochester’s Eastman School of Music. Six of his articles have won the ASCAP-Deems Taylor Award for excellence in writing about music. His most recent two books are Musical Exoticism: Images and Reflections and Music and the Exotic from the Renaissance to Mozart (both Cambridge University Press). Both are now available in paperback; the second, also as an e-book. Ralph Locke also contributes to American Record Guide and to the online arts-magazines NewYorkArts.net, OperaToday.com, and The Boston Musical Intelligencer. His articles have appeared in major scholarly journals, in OxfordMusicOnline (Grove Dictionary), and in the program books of major opera hou          ses, e.g., Santa Fe (New Mexico), Wexford (Ireland), Glyndebourne, Covent Garden, and the Bavarian State Opera (Munich). The present review is based on one that first appeared in American Record Guide; it appears here by kind permission.