This CD with British pianist Stephen Hough is a gem — and it was named Recording of the Month by Gramophone Magazine. 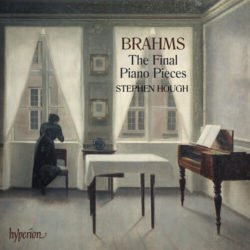 Johannes Brahms’s impassioned last piano cycles (Op. 116, 117, 118, and 119) represent the final flowering of 19th-century German piano music. These 20 virtuosic miniatures, about three minutes each, are among the greatest of not just Brahms’s piano pieces, but of any composer’s. Fourteen of these are intermezzi, usually with a contrasting middle section that is often breathtakingly lovely. I have adored these pieces for some 50 years, have heard countless performances, and even played five of them on the harp. So I am thrilled to say that this CD with British pianist Stephen Hough is a gem — and that it was just was named Recording of the Month by Gramophone Magazine.

I first heard Hough at Rockport Music six years ago (Arts Fuse review), and described his Brahms playing on that occasion as “enthralling, poetic, and spellbinding.” This is Hough’s sixth all-Brahms album, and it comes as no surprise that I would use the same three words to describe his performances here. In his program notes, Hough describes these 20 late gems as

salon music taken to the nth degree. Yet ‘salon’ suggests a small audience. I don’t see anyone in the room with Brahms. In Schubert, the father figure of all such small piano pieces, however painful the melody’s turn, one senses it was shared with sympathetic listeners. In Brahms, as the nineteenth century and his life begin to close down, the bearded pianist sits at the piano alone. These small masterpieces are some release, some exploration, some passing of time as the light fades and the final cigar is extinguished.

Having recorded five other Brahms albums, Hough — pianist, composer, painter, and prolific writer of great charm and intelligence — comes to these late Brahms works equipped with considerable brain-power, sensitivity, and a profound understanding of the composer. His interpretations are often moving, haunting, poignant, and simply beautiful.

Brahms wrote these introspective, autumnal pieces in consecutive summers at the Austrian resort Bad Ischl, where he also drafted his will. Hough believes that “after Schumann’s death, Brahms became closed in emotionally, refining his feelings into more intellectual pursuits. By the end of his life you get a window into all the regret. We hear the work of an old person looking back at what might have been. I find it incredibly touching.”

Opus 116, Seven Fantasies, opens and closes with a dramatic, vigorous Capriccios, containing four Intermezzi and yet another Capriccio. Brahms seems to have compressed the essence of his musical and emotional thoughts into these miniatures. Hough’s three Capriccios are very impressive. Opus 117, Three Intermezzi, each one a gem, dates from 1892, and is quite irresistibly played here. The first, with its simple tune and rocking motion, is prefaced by words of a Scottish lullaby, “Lady Anne Bothwell’s Lament,” which begins: “Baloo, my babe, lie still and sleep; It grieves me sore to see thee weep.” Brahms referred to the third Intermezzo as “the lullaby of all my griefs.” In Hough’s hands, each of the Opus 117 Intermezzi intermingle dreaminess, hope, and inchoate sorrow.

Opus 118, “Six Pieces” (1893) contains three of Brahms’s best-known piano pieces, and three others which have languished in relative obscurity: four Intermezzi, a Ballade, and a Romance. The Intermezzo in A is one of his most beloved works, and the Romance, which is often overlooked, is one of my favorite Brahms pieces (I was so enraptured by these two pieces that I’ve played both on harp). Hough’s playing is, again, sensitive and deeply emotive. Opus 119, Four Pieces (1893) contains another three Intermezzi and finally, a glorious Rhapsody. Cumulatively, these 20 pieces interweave serenity with passionate outbursts. Hough treats these outbursts of passion with compelling fervor. All in all, a most impressive Brahms recording.

Suson Miron, a harpist, has been a book reviewer for over 30 years for a large variety of literary publications and newspapers. Her fields of expertise were East and Central European, Irish, and Israeli literature. Susan covers classical music for The Arts Fuse and The Boston Musical Intelligencer.