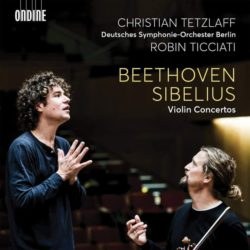 My favorite concert performance of 2015 was violinist Christian Tetzlaff’s brilliant account of Beethoven’s Violin Concerto with the Boston Symphony. His interpretation, committed to disc with the Deutsches Symphonie-Orchester Berlin and Robin Ticciati, is out now on a spectacular new album from Ondine that pairs the Beethoven with Jean Sibelius’s 1904 Violin Concerto.

Everything that made Tetzlaff’s live Symphony Hall performance so mesmeric—the dynamic extremes, rhythmic flexibility, take-nothing-for-granted phrasing—is on display here. His is playing of terrific urgency, flawless intonation, spirited character, and deep feeling. The subtle rhythmic figurations in the opening movement (Beethoven’s mix of duplets, triplets, and quintuplets) come across with improvisatory freshness. The central one sings with effortless lyricism, while the finale lacks nothing for pluck and brio.

Tetzlaff’s take on the Sibelius concerto is likewise focused and intense. The solo line in the first movement seethes. His reading of the “Adagio” is a torrid blend of poetry and fire. And the dotted rhythms of the finale dance with an attention to rhythmic detail that is simply irresistible.

Ticciati leads the Berlin orchestra in an accompaniment of bristling vitality in the Beethoven: theirs is playing that matches Teztlaff’s wonderfully in energy and color. In the Sibelius, the ensemble delivers a performance of terrific textural clarity, as well as expressive force.

Ondine’s sonics are, as usual, excellent. In all, this is a great album: one that treats that standard of the canon with the freshness and thoughtfulness it both deserves and requires. 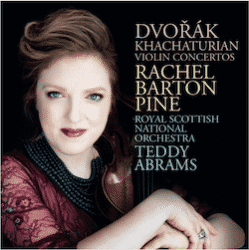 Rachel Barton Pine’s new recordings of the Dvorák and Khachaturian violin concertos is both smartly programmed and spectacularly realized. Both composers were fine craftsmen, excellent tunesmiths, and deeply impacted by the folk musics of their respective countries.

Khachaturian’s 1940 effort draws deeply on Armenian influences, especially in its soaring, mournful central movement. Pine certainly draws out the soulful quality of the latter in her recording. Her full performance is a bit broader than Itzhak Perlman’s early-’80s account of the piece. Yet the slower tempos generally work thanks to Pine’s thoughtful sense of phrase, her uncanny ability to articulate the musical line, and her faultless intonation (she also plays the daylights out of David Oistrakh’s alternate first-movement cadenza).

True, conductor Teddy Abrams seems to be pushing the Royal Scottish National Orchestra (RSNO) a bit harder than Pine wants to go in the work’s instrumental interludes. Yet these subtle differences of speed tend to build a welcome tension into a piece that can come across as trite and superficial.

Conductor, ensemble, and soloist are largely on the same page in the Dvorák. Their reading is songful; flashy, but not overly brisk; and, throughout, played with a strong understanding of the music’s style.

Pine leaves nothing to be desired as the soloist. Her pitch is true, tone robust, and sense of character impeccable. Perlman’s old EMI disc might be a bit more rhapsodic, Anne-Sophie Mutter’s recent account more regal, and Tetzlaff’s Ondine recording rather quirkier. But this one fits comfortably among those three: for a simply great approach to this ferociously demanding piece, you will not find a more sympathetic or musically satisfying guide than Pine. 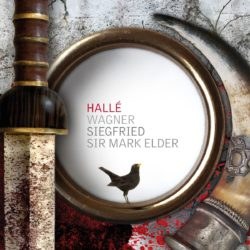 Sir Mark Elder and the Hallé Orchestra began their traversal of Richard Wagner’s Der Ring des Nibelungen a full decade ago: their recording of Götterdämmerung was released in 2009. Now they’ve finally reached the end of the road with Siegfried (Das Rheingold and Die Walküre came, respectively, in 2011 and 2016).

Orchestrally, the wait is more than worth it: the Hallé forces turn in an account of Wagner’s extraordinary score that, if it’s not the finest available, must rank among the top three or four. Their playing wants for nothing in terms of technique. As for character, well, ditto: this is a reading that is unfailingly colorful and fresh. The famous orchestral scenes – Siegfried’s Act 2 horn calls and “Forest Murmurs” – are mighty and enchanting. And the preludes (especially the sinister opening to Act 1) come across with potency.

Much of the credit for this is due to Elder, whose command of Wagner’s style and Siegfried’s structure is total. His interpretation is expertly paced, finely textured, and ensures that each of the opera’s nine scenes are carefully shaped

Vocally, the performance is largely strong – though also far from perfect.

Among the singers, the star of this Siegfried is Gerhard Siegel’s Mime. His sinister dwarf is as three-dimensional as possible – even, perhaps, a bit sympathetic in the role’s introspective moments. Siegel owns the part, singing it with unrelenting energy, biting tone, and raw emotion: in his characterization, he calls to mind Gerhard Stolze from Solti’s Ring, though with better recorded sound.

Singing the title role, O’Neill sounds pushed in some of the part’s biggest moments (like the third scene of Act 1); never quite blends, tonally, in his ensemble scenes (save those with Nicholls); and his character comes across as more detached than arrogant. That said, he’s a fresh-voiced tenor who sings in tune and his solo moments, like Siegfried’s Act 2 soliloquy (“Aber wie sah meine Mutter wohl aus?”), are compelling.

Iain Patterson proves a sympathetic Wanderer/Wotan, sad and knowing. He’s got a big tone, which is plenty appropriate, though often his wobbly vibrato proves distracting.

This Siegfried was taped live in Manchester last June. You’d hardly know that to listen to the recording: the only extraneous noise present is some audience snickering during Siegfried’s flailing reed pipe scene (which is, admittedly, probably the Ring’s one truly laugh-out-loud moment). Otherwise, the album’s recorded sound is excellent: perfect balances between voices and orchestra rule the day.