A 1962 concert performance from Radio Italiana, now on CD, shows how delightful Wagner can sound without barking and slow wobbles. 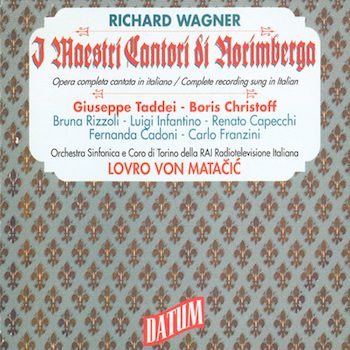 Ever wanted to hear a Wagner opera performed with smooth singing: little or no barking, effortful huffing, or slow wobbling? Sure, there have been individual singers who have managed the trick, such as Plácido Domingo in Giuseppe Sinopoli’s famous Tannhäuser recording. But I mean the whole cast, from the biggest roles right down to the smallest. Well, here’s your chance: a complete Die Meistersinger von Nürnberg that is a near-constant pleasure to the ears. The only problem is that it’s sung in Italian: hence I maestri cantori di Norimberga. But don’t let that you put you off. Opera houses in many countries have developed their own national traditions of Wagner singing in the vernacular. Opera enthusiasts cherish certain recorded Wagner excerpts sung magnificently in French by soprano Germaine Lubin or tenor Georges Thill.

The English-speaking world finally got a glimpse of what Wagner in one’s own language might be like when, in 1973-77, the English National Opera recorded the Ring Cycle under Reginald Goodall, using the superb singing translation by music critic and scholar Andrew Porter.

In the present case, the experience is wonderful! And this should not be so surprising, given that Italy has such a long and distinguished tradition of comic opera (e.g., Rossini’s The Barber of Seville), and given that Die Meistersinger is one of the great comic operas of the late nineteenth century (Others surely include Offenbach’s Orpheus in the Underworld, Chabrier’s L’Étoile, and Verdi’s Falstaff.)

This recording of I maestri cantori comes from the vaults of RAI, the Italian radio-television network. It is based on what appears to have been a concert performance—on February 8, 1962—in the station’s famous studio in Turin. There is enthusiastic applause at the ends of acts but nowhere else.

Nearly all the singers are Italian, and the one main exception—the near-legendary Bulgarian basso Boris Christoff—studied in Italy. His vividly detailed 1950s and -60s renderings of roles such as Boris Godunov (in Musorgsky’s opera of that name) and Mephistophélès (in Gounod’s Faust) continue to demonstrate, even today, how the resources of a major voice can make a dramatic portrayal specific, even indelible.

Two of the other singers who take major roles here—Giuseppe Taddei (Hans Sachs) and Renato Capecchi (Beckmesser)—are widely known for their recorded performances in Italian operas. For example, the authoritative Metropolitan Opera Guide to Recorded Opera says of Taddei’s recording of the title role in Puccini’s Gianni Schicchi (a one-act comedy from 1918), “He brings precisely the right weight to every note, precisely the right emphasis to every word . . . Taddei’s full-bodied voice is consistently beautiful. He is eminently musical, producing exemplary legatos.”

Others in the cast of this Italianized and indeed Italianate Meistersinger—such as the Walther, David, Eva, and Magdalene—seem to have achieved primarily local fame. The result is a performance that has a flavor all its own, with much beautifully rendered lyricism and pointed and effective pronunciation of the Italian text. I often had the impression that I was, for once, listening to a truly comical opera, with lively interaction between the singers, rather than—as in some other recordings—a less grim Tristan und Isolde.

I must praise especially a tenor I had never heard of, Carlo Franzini, who graces the opening scene of the opera with one of the best-sung Davids on records—a match, easily, for Gerhard Unger’s famous rendering of the role in several recordings (such as Rafael Kubelik’s superb studio broadcast, now on Myto and, apparently in even better sound, on ARTS).

I feared that Luigi Infantino, a light, high tenor whom I had previously known only from a recording of Il barbiere di Siviglia, would be utterly inadequate for the role of Walther, which has traditionally been sung by many Heldentenors who on other nights hold the stage as a sonorous Tristan or Siegfried. In fact, Infantino darkens his voice just enough to handle the role capably. Perhaps we are ready now to hear such a reading, having been accustomed to Domingo or to the current exemplar of a lighter Wagnerian tenor, Klaus Florian Vogt. (See my praise for Vogt’s reading of the title role in the Concertgebouw recording of Lohengrin. A superb Lohengrin with a more typical Heldentenor was recently re-released: a performance from the 1967 Bayreuth Festival, featuring James King and, as Elsa, the no less remarkable Heather Harper.)

There are some limitations: Infantino tightens instead of soars on the top notes, and the lowest notes, though present, can lack support. He could not have sung the role satisfyingly in a big opera house. This may displease some listeners who are accustomed to a big, rounded tone in grand opera. His voice is narrowly focused, somewhat like that of tenors who specialize in character roles, such as Spoletta in Tosca or Wagner’s Loge or Mime. Indeed, in one passage of rapid, annoyed declamation in the middle of Walther’s Act 2 scene with Eva, Infantino resembles Mime disconcertingly (Disc 2, Track 10, at minute 3’15”). But, on a recording, his reading works just fine in its own way, and fits with the fleet and conversational tone of the whole performance.

Bruna Rizzoli, as Eva, cannot compete with such renowned Evas as Elisabeth Grümmer, Elisabeth Schwarzkopf, Gundula Janowitz, or (in a historic set of excerpts from the 1930s with Friedrich Schorr as Sachs) Elisabeth Schumann. But she holds her own in the present context, even showing some appropriate flashes of anger in her discussions with Sachs. I wonder if Rizzoli participated in other radio broadcasts that are worth resurrecting.

Best of all are the singers of the three main baritone or bass roles: Taddei (Sachs), Capecchi (Beckmesser), and Christoff (Pogner). All three have unique-sounding voices and vocal manners that allow one to differentiate them instantly, and each conveys oodles of character, as one would expect from the many famous recordings that they have given us of roles in Italian operas (and, for Christoff, French and Russian ones).

Christoff’s ability to bellow solidly but also to whisper resonantly is on splendid display and helps him convey Pogner’s authority in discussions with his fellow Mastersingers and a touching affection in conversation with his daughter Eva. Taddei does his Act 2 monologue (“Was duftet doch der Flieder,” or, here “Qual gelsomin, più dolce odor”) as beautifully as I have ever heard it. It sounds absolutely like a character thinking, quietly (until the full-voiced, prideful final line), his own complex thoughts about life, talent, and love.

Taddei’s voice, like Infantino’s, is a little light at the bottom. If you want a capacious, embracing bass-baritone in the role, look elsewhere (e.g., Hans Hotter, Karl Ridderbusch, James Morris, or—in those stupendously performed excerpts from the 1930s—Friedrich Schorr). Taddei does finally shout a bit at the end of the “Wahn” (woops, “Follia”) monologue. Still, what he has to offer in the role is touching and cherishable.

Capecchi makes a vivid Beckmesser at every turn: he comes close to half-speaking far more than does Taddei as Sachs, but so of course do all players of the largely satirical role of Beckmesser. Vito Susca huffs through Kothner’s coloratura bits, but that is arguably appropriate to this old and grumbly character.

The sound is clear, with nice stereo separation of the various singers in quick dialogue exchanges. The conductor, Lovro von Matačić, was born in Croatia but active in Vienna, at Bayreuth and Chicago Lyric, and elsewhere, and widely appreciated for his many recordings. He keeps the music moving nicely yet never rushes. The orchestra follows him in sprightly fashion, though it is often balanced somewhat more distantly than the singers, never welling up to surround and caress them as in the best studio recordings of that era or ours.

The release is a welcome reminder that—as I hinted at the outset—a great opera can profit from different musical and linguistic approaches. The internationalization and homogenization of operatic performance over the past fifty years or more has caused many of us to forget this. (This smoothing out of national traditions of operatic singing is one of many recent trends that Conrad L. Osborne rightly bewails in his recent book Opera as Opera: The State of the Art, which I reviewed for The Boston Musical Intelligencer.) Opera lovers today might not feel such a need for updated and reimagined (and often anti-operatic) stagings to refresh the supposedly “stale” repertory if live performances were as fresh-sounding yet true-to-the-spirit as this. I found much here to respond to and to challenge my own listening habits and memories. I will listen to it often, with pleasure.

The set’s value would have been greatly increased if a libretto had been included, in Italian and, ideally, also in German and English. Parallel libretti would have enabled the listener to compare how a given phrase was translated and then rendered by the performers. The track list does give the first words of each track in Italian and in German, which helps a bit. But it sometimes confuses matters by naming the singers on a track in the wrong order. Thus, CD 1, track 9, “Or date ascolta a me!” (better known as “Nun hört, und versteht mich recht!”) is Pogner’s announcement of the competition and the prize (his daughter Eva’s hand in marriage), yet the track is described as beginning with a contribution from Sachs. Fortunately, Boris Christoff’s distinctively dark yet vivid sound is unmistakable. I knew immediately that Pogner was the character I was hearing. The track list gives no timing at all for the last track in Act 1 (it’s 3:54). And the booklet essay names two famous singers as participating in the performance who in fact did not (unless the performer info at the beginning of the booklet is wrong). A reading so distinguished and ear-opening deserves more careful presentation.

Collectors looking for a reliable recording in German might want to consider the ones conducted by Eugen Jochum (with Caterina Ligendza, Plácido Domingo, and Dietrich Fischer-Dieskau, though the latter can be fussy as Sachs), Georg Solti (his second recording, in superb sound, with Karita Mattila, Ben Heppner, and José van Dam), or Rafael Kubelik (with Gundula Janowitz, Sándor Kónya, and Thomas Stewart—but the booklet lacks a libretto).

As for myself, I am holding on to this Italian recording, and may well often turn to it as a first choice for listening pleasure.

In fact, this wonderful recording in (most of) the singers’ native language gives me an idea. The Met’s wonderfully entertaining English-language performances of Mozart’s The Magic Flute (likewise a comic opera originally in German) have been enormously successful over several seasons. So maybe some North American company—or the Met itself—might like to mount an imaginative production of a witty English version of Wagner’s only comic opera. Many operagoers might be surprised to find out that they like Wagner after all.

Ralph P. Locke is emeritus professor of musicology at the University of Rochester’s Eastman School of Music. Six of his articles have won the ASCAP-Deems Taylor Award for excellence in writing about music. His most recent two books are Musical Exoticism: Images and Reflections and Music and the Exotic from the Renaissance to Mozart (both Cambridge University Press). Both are now available in paperback, and the second is also available as an e-book. The present review is a lightly revised version of one that first appeared in American Record Guide and is used here by kind permission. Ralph Locke also contributes to the online arts-magazines NewYorkArts.net, OperaToday.com, and The Boston Musical Intelligencer, and to Musicology Now, the blog of the American Musicological Society.