Fine recordings of symphonies by neglected American composers Florence Price and George Antheil; and a curious album from Cornelius Meister and the ORF Radio-Sinfonieorchester Wien. 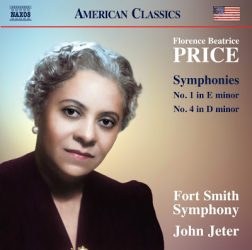 One of the happier developments, of late, in the classical music world has been the increase in interest in the music of Florence Price. Born in Arkansas, trained in Boston, and, later, a fixture in the African-American cultural scene in Chicago, Price was a prolific composer and arranger; one of her close friends was Marian Anderson, who frequently programmed her settings of spirituals.

Since her sudden death in 1953, Price’s output has largely fallen into neglect, though the chance discovery, a decade ago in a dilapidated house in rural Illinois, of a trove of her scores has sparked a resurgence of interest in her work. Out now from Naxos is a new recording of her Symphony no. 1, as well as the world premiere recording of her Symphony no. 4. It’s more than welcome.

Price’s musical language is a captivating synthesis of European genres and African-American musical content. The latter feature is most evident in her melodic writing (which frequently alludes to spirituals, work songs, and employs pentatonic scales), instrumentation (various African drums figure prominently), and adoption of the Juba dance (a vigorous type of pre-Civil War dance performed by slaves on plantations) in place of the traditional scherzo movement in both symphonies.

That said, both works sound are steeped in the late-Romantic symphonic tradition. The shadows of Dvorak and Brahms don’t seem too far off (the Fourth’s slow movement’s delicately-scored, syncopated opening theme recalls the New World Symphony more than a little). But by that token, neither do those of Charles Ives, Amy Beach, George Whitefield Chadwick, William Grant Still – and Price’s natural lyrical gifts and her fine ear for instrumental color (there’s some particularly deft percussion writing in the First’s second movement) help define these scores’ individuality.

Both symphonies follow the standard, four-movement pattern. The First, which was premiered by Frederick Stock and the Chicago Symphony in 1933, begins with two expansive movements, the latter of which is a striking, hymn-like call-and-response essay. Its third-movement Juba offers some exotic sounds (including a pair of African drums and a wind machine), though it never really breaks out of its four-square phrasing. The final moto perpetuo, with a sudden chromatic turn in the middle, brings the piece to a driving close.

The Fourth, written in 1944, follows an almost identical structure, though it’s a bit more compact. Its first movement paraphrases the spiritual “Wade in the Water,” and Price’s manipulation the song’s motives are constantly engaging. The Juba movement is a bit freer, as well as harmonically pungent, and the finale modulates generously.

These performances, which feature the Fort Smith, Arkansas-based Fort Smith Symphony and conductor John Jeter, are strongly played. Yes, there are a couple of moments of textural unclarity. But the ensemble plays with missionary zeal that these blemishes don’t amount to much.

Rather, the overriding impression one comes away from the disc with is how thoroughly Jeter and his band have Price’s style in hand. The Juba’s are each fresh and whimsical. Both slow movements come across with serene nobility. And the outer movements, with their potent gestures, sweeping tunes, and crafty scoring, are mighty statements, indeed. With excellent liner notes by Douglas Shadle to boot, this is a release that’s firing on all cylinders. 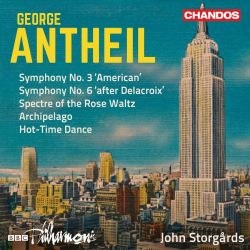 If Price’s neglect can be chalked up (more or less) to the chronic underrepresentation of women composers and people of color on orchestral concert programs, what does one make of the neglected legacy of George Antheil? The self-proclaimed “Bad Boy” of American music’s reputation largely rests on a pair of early works, the Jazz Symphony and Ballet mécanique. His larger output covers many genres, from film scores and operas to symphonic works and chamber music; many of those later pieces are, in certain regards, less daring than the earlier ones, as the latest installment in Chandos Records’ Antheil series attests.

His Symphony no. 3 was originally written as a sort of musical travelogue, documenting Antheil’s drives across the United States in the ‘30s. But he rewrote it in the ‘40s and the result is more abstract, though still “American” (as its subtitle states): brash, optimistic, a bit hodge-podge. Its syncopated first movement is gleefully extroverted. The second alternates a chorale, a slow march, and a more active figure, while the manic third (“The Golden Spike”) draws on an aborted film score. In the finale (“Back to Baltimore”), a kind of spastic rondo, Antheil channels Shostakovich (among others) before the piece wraps up with a series of blazing fanfares.

Antheil’s last symphony, his Sixth, subtitled “After Delacroix,” took that painter’s Liberty Leading the People as its point of departure. The first of its three movements evokes the battle scene of the artwork. While the slow middle one lacks a programmatic dimension, the finale offers a triumphant resolution to the tumult and melancholy of the previous sections.

Both scores have their moments. “The Golden Spike” is raucous in spirit and brilliantly scored. And “After Delacroix’s” slow movement offers a series of striking episodes, including a passage for piccolo accompanied by glockenspiel and a lush central section. And its finale is a spunky little juggernaut. Still, contemporary assessments of the Sixth (the Third wasn’t premiered until 2004) have aged pretty well: too often banal, bombastic, and derivative.

That said, John Storgårds and the BBC Philharmonic play both symphonies with plenty of panache, color, and rhythmic energy. If one doesn’t come away from the music with a stronger impression of it, well, it’s not the orchestra’s fault.

Conductor and ensemble also make convincing work of the album’s appealing, tuneful fillers: Archipelago, Hot-Time Dance, and Specter of the Rose Waltz, the latter an extract from Antheil’s score to the film of the same name.

Here’s a curious album from Cornelius Meister and the ORF Radio-Sinfonieorchester Wien. The main draw ought to be just the second recording of Igor Stravinsky’s recently-rediscovered Funeral Song. A memorial to his teacher, Nikolai Rimsky-Korsakov, the work proves to be something of a dud, though. Elegiac and capably scored (there’s some nice woodwind writing to be had, in particular), it suggests little of Stravinsky’s mature voice, coming across as dutiful and rather faceless.

In 1910, two years after the Funeral Song came Stravinsky’s first true masterpiece, The Firebird, and, on this album, its Suite, drawn from the 1919 version, makes for an interesting contrast with the earlier score. Indeed, it inhabits a totally different musical world, one both fantastical and visionary.

The present performance captures much of The Firebird’s freshness well if not quite spectacularly. The ORF orchestra plays up the shimmery colors of the “Introduction and “Variation of the Firebird,” makes vigorous work of the “Infernal Dance,” and delivers a lovely account of the “Lullaby.” Still, the reading lacks the spark that brings the best accounts of this music to life, a reality that’s brought home in a frustratingly dull realization of the “Finale.”

Filling out the album is Shostakovich’s Symphony no. 12. Called “The Year 1917,” it’s a propagandistic homage to Lenin, though there are exciting and striking moments that occur throughout.

Meister’s reading of the first movement (“Revolutionary Petrograd”) is both lush (in the introduction and at the lyrical climax) and intense (during the battle music), while the second (“Razliv”) is just plain slow, drawn out almost to the breaking point. The last two are rhythmically tight (especially the driving third, “Aurora”), if expressively shallow.

The ORF’s playing is lively and warm, throughout well-balanced and colorful. Interpretively, the Symphony probably fares best of these three selections, and it caps off one of the New Year’s more intriguing — if, on the whole, perhaps a bit too intentionally-rendered — programs.