River Music will satisfy the slightly adventurous listener as few other records I heard last year. 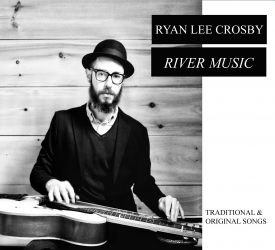 In Hari Kunzru’s novel White Tears, two contemporary Brooklynites — a slumming rich kid and his shy, slightly awed sidekick — start to collect obscure blues records after overhearing a strange song while hanging out in Union Square. Obsession with “authenticity” ultimately proves to be dangerous but Seth, the awkward narrator, has this to say about listening to these ancient records: “You are listening through a gray drizzle of static, a sound like rain. You can never forget how far away you are. You always hear it, the sound of distance in time. But what is the connection between the listener and the musician? Does it matter that one of you is alive and one is dead? And which is which?”

I’ve had that haunting feeling plenty of times, especially when listening to the delta blues. The likes of Skip James and Robert Johnson made music that compels one’s complete attention, hypnotizing the listener with its subtle power. Delta blues offers plenty of earthy celebration of the senses, but there’s a yearning spirituality in there that infuses all the talk of sin and death. I like songs with a bit of drone in them — for some reason I find that depth of tone deeply soothing, like contemplating the vastness of the sky. Because of all this, it was delightful to discover the music of Boston’s own Ryan Lee Crosby, who mixes a deep understanding of the delta blues with North Indian raga.

Crosby has been touring across America and Europe for years, and gigs regularly in the Boston area. His new record River Music (released by Knick Knack Records) and includes his versions of traditional songs with originals, mixing the past and the present into a potent musical stew. Tabla drums and West African calabash percussion support the rumbling of his electric guitar with short bursts of harmonica, taking the time-honored rhythms of the blues and stirring in a delicious, rich Eastern drone. His vocals stir this swirling broth with practiced singer’s earned confidence, crooning one minute and lamenting the next. River Music will satisfy the slightly adventurous listener as few other records I heard last year.

The opening number “If You Are to Suffer” kicks off the record with a peppery tabla drum intro and slides effortlessly into a groove reminiscent of Howlin’ Wolf’s immortal “Smokestack Lightnin.” Wolf was well-known for his rowdy ways onstage, but the lyric’s ominous dread lie coiled underneath the snap of the beat. Crosby turns it into a meditation on the human condition: “If you are to suffer/ Know you’re not alone/ No one in this world makes it on their own// Some are born to struggle, some are born to ease/ Some are born to wealth, some to poverty/ But one day each of us will be brought to our knees.”

One mark of a quality record, I think, is how well it passes the headphones test. Does the music improve with increased physical proximity or not? Listening to music on headphones makes you lose the ambience of whatever room you’re in, which is unfortunate, but it also means that the music has nowhere to hide. Your ears are smushed up against the speakers, and the music’s got to deliver the goods. I’ve field-tested this on a few occasions, and I’m pleased to say that the singular vibe of Crosby’s music basks in the kind of immersion headphones bring. In the best blues tradition, it really cooks when heard on a train at night, with the cityscape in the distance.

Crosby applies his aesthetic to R.L. Burnside’s “Going Down South” and adds something new to the master bluesman’s song of betrayal and remorse, adding in some punchy saxophone for good measure, an intriguing choice that could have been utilized more on the rest of the record. The trance-like quality of the raga, originally meant to accompany ecstatic recitation, makes the hairs rise on the back of my neck. I’ll admit that my understanding of the richness of Indian music is superficial at best, limited to Ravi Shankar and the George Harrison tunes on later Beatles records. But I know something about the blues, and melding the two musical traditions together feels a lot like getting the best of both worlds, even to my Western-trained ears.

Making an innovative lyrical choice, Crosby weds the fatalism of the delta with an Eastern awareness of transience. “I’m Dissatisfied” laments like so: “I’m dissatisfied, bothered all the time/ Would that spirit come, spirit set me free/ Let your light shine on forces inside me.” Not an original sentiment, but with the tabla smoothly pounding in the background, electric guitar and harmonica swirling together in the mix behind the nasally poignance of the vocal, you believe what he’s saying. Crosby played in punk bands as a teenager, and “The Hustler” is a protest song that roils with outrage but wisely takes the long view about dealing with you-know-who: “The hustler’s out there but don’t say his name/ Each time you do, you only bring him fame// Pull back the curtain and what do you see?/ Just a man alone in misery.” Amen to that.

A great deal of the record is quite danceable, too. In “Since I Lay My Burden Down” (covered by many blues musicians, including Mississippi John Hurt), Crosby emphasizes the titular premise as a joyful celebration of enlightenment. “Death Ain’t Unwelcome Here” interprets the acceptance of our physical impermanence on earth as a foot-stomping barrelhouse number overflowing with quavering backing vocals and some lively slide guitar. It is wise to keep in mind that Death is an inevitability, but when you listen to River Music you’d hate to have him break up the party.