An impressive collection of nine new releases (seven of which are reviewed here). While some might not displace the classic recordings of Debussy already out there, this gathering offers some welcome and fresh interpretive contrasts.

The centennial of Debussy’s 1918 death was maybe not the biggest classical music recording event to happen in 2018 – the 100th anniversary of Leonard Bernstein’s birth seems to have captured many label’s and artist’s imaginations this year – but it didn’t pass unnoticed by any means, either. Deutsche Grammophon and Warner, for instance, marked it with a pair of respective box sets, drawn from their impressive vaults, of the composer’s complete works.

Harmonia mundi (HM) went in a slightly different direction, with a series of new albums released across the year that celebrate, if not Debussy’s complete output, then just about all of it. Theirs is an impressive collection of nine new releases (seven of which are reviewed here). While some might not displace the classic recordings already out there, this gathering offers, at the very least, some welcome and fresh interpretive contrasts. 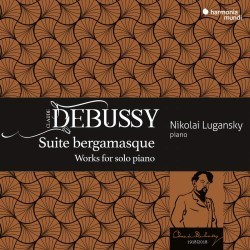 For sheer charm, you can hardly do better than Nikolai Lugansky’s survey of assorted Debussy piano pieces. It’s anchored by a pair of substantial works, the first of which is a beautiful rendition of Suite Bergamasque: the outer “Prelude” and “Passepied” movements are rhythmically incisive, ably balancing the music’s Baroque and fin de siècle tendencies. In between come a nobly direct “Minuet” and a lovely, unsentimental account of “Claire de lune.”

The other is a captivating traversal of Images’ second series. Lugansky gamely mines the colorful shades and rhythmic textures of the opening “Cloches à travers les feuilles” while teasing out the mystery of “Et la lune descend sur le temple qui fut.” “Poissons d’or” shimmers with whimsy and character.

Filling out the disc is a darkly lilting interpretation of La plus que lent, as well as a fresh, graceful account of the Deux Arabesques, and a droll reading of the Homáge a Haydn. Lugansky also turns in an invigorating “Jardins sous la pluie” (from Estampes) and, to star things off, delivers an ecstatic performance of L’isle joyeux.

Then there’s Roger Muraro’s recording of the two books of Etudes. Muraro’s a pianist who knows how to have fun with these pieces, playing up their sudden juxtapositions of mood, texture, and tonality with a kind of carefree exuberance. Thus the opening set’s “Pour les ‘cinq doigts’” lacks nothing for vitality – or, for that matter, clarity of voicing. Similarly, “Pour les tierces” exhibits plenty of spirit and Muraro dispatches “Pour les sixtes’” delicate articulations with total command and security. The second set, despite its staggeringly-virtuosic “Pour les degrés chromatiques” and feisty “Pour les accords,” are more emotionally weighted: Muraro’s “Pour les agréments” and “Pour les arpèges composes” are sumptuously done, while “Pour les sonorités opposees” is direct and passionate.

Muraro balances the Etudes not with more Debussy but with music by another 20th-century French visionary, Olivier Messiaen. Fauvettes de l’Hérault, a sort of composite piece drawn from sketches for Messiaen’s incomplete piano concerto in memory of Debussy, capably marries the older composer’s defining traits – blazing keyboard colors, lush harmonies, rhythmic ambiguity – with the younger’s conspicuously fresh sense of the same. Muraro’s recording of Fauvettes – the work’s first – is judicious and sonorous: a logical aesthetic and expressive continuation of the Etudes’ emotional world.

Of course, no survey of Debussy’s piano music is complete without the Preludes, and Harmonia mundi’s split the two books between a pair of their finest pianists. 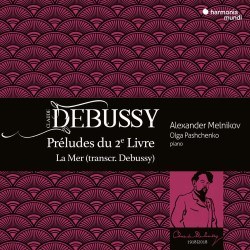 For the first one, Javier Perianes turns in a performance that is, in equal measure, beautifully voiced and deeply poetic. He makes hypnotic work of “Voiles,” gets “Les sons et les parfums tournant dans l’air du soir” to sing with supple elegance, and turns in a weightless “Des pas sur la neige.” At the same time, Perianes draws out the sultry, Iberian charm of “La sérénade interrompue” and vigorously captures the essential, impish wit behind both “La danse de Puck” and “Minstrels.”

To complete the disc, Perianes turns to Debussy’s Estampes. His account of “Pagodes” is gently rhapsodic: even its climax is steadfastly mellifluous. So is “La soirée dans Grenade,” which sings more than it exudes fervency. His “Jardins sous la Pluie” doesn’t want for energy, though it’s a hair less extroverted than Lugansky’s.

Alexander Melnikov’s account of the second book of Preludes, played on a turn-of-the-century Érard piano, is unfailingly lyrical, even as it’s filled with atmospheric gestures and spades of character. The poetic movements – like the delightfully slinky “Wine Door” prelude and the dignified “Bruyéres” – are each given lively renderings. His technique is a thing to behold, throughout, whether executing the runs of “Les fées sont d’exquises danseuses” with icy clarity or ably balancing the layered textures of “Ondine.”

For the rest of the album, Melnikov is joined by Olga Pashchenko for Debussy’s piano-four-hands arrangement of La mer. The piece itself is a fascinating reduction: filled with the same gestures and arguments of the larger-scale orchestral version but heard in an infinitely more intimate context. Melnikov and Pashchenko give it a sonorous reading, with a sweeping “De l’aube à midi sur la mer” and tempestuous “Dialogue du vent et de la mer” framing a sparkling, exuberant “Jeux de vagues.” It’s a marvelous arrangement and a gripping performance.

Of course, if you want a recording of the familiar orchestral version of La mer, there are plenty from which to choose. Pablo Heras-Casado’s performance in this set with the Philharmonia Orchestra is no shrinking violet. Quite the opposite: the Philharmonia’s playing is fluent and sumptuous, with Heras-Casado nicely juggling the music’s many moving layers but never losing sight of its expressive core.

He does a strong job, too, on the more obscure “Symphonic fragments” from Le martyre de Saint Sébastien, André Caplet’s adaptation of Debussy’s incidental music to Gabriele D’Annunzio’s eponymous play. Again, the Philharmonia’s playing is impressive: perfectly-balanced and bright with sensuous colors in the opening “La Cour de Lys,” brimming with mystery in the inventive opening half of the “Danse extatique et Final du 1er Acte,” and the bracing dissonances of “La Passion” shine. Add to this a plush, if superfluous, reading of the Prelude to the Afternoon of a Faun, and you’ve got one satisfying all-Debussy disc. 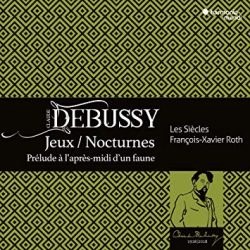 François-Xavier Roth and his period-instrument ensemble, Les Siècles, also play that Prelude – as well as Debussy’s enigmatic ballet Jeux and the visionary Nocturnes. The outer movements of the latter, “Nuages” and “Sirènes,” float by with winsome charm, while the central one, “Fêtes,” feels a mite restrained but lacks nothing for rhythmic forcefulness. Roth’s accounts of the Prelude and Jeux are similarly involved and shapely.

All three works, in fact, benefit from the period-ensemble treatment: textures are lean and precise but never scraggy. Add to that Les Siècles excellent attention to the music’s myriad dynamic and articulative details, and there’s nothing major to complain of here.

The former is played with decorum and refinement, its striking tonal shifts all coolly etched. Its first movement is taut and unsentimental, while the layered rhythms of the second speak intensely. The third is given a fervent reading, especially its haunting middle part, and the finale is, in the Jerusalem’s hands, as exhilarating as it comes.

Their performance of the Ravel Quartet is marked by a similar intensity in its outer movements framing a stylish account of the bounding second and a lilting reading of the slow third.

Last in this series (but surely not least) is a handsome, two-disc set dedicated to Debussy’s substantial output of songs. Soprano Sophie Karthäuser and baritone Stéphane Degout split the vocal duties and, between them, you could hardly ask for more sympathetic interpreters of this repertoire. 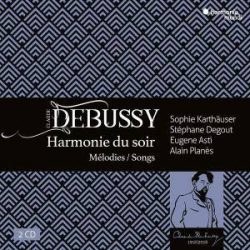 Karthäuser, for her part, brings supple tone, impeccable rhythm, spot-on intonation, and a noble sense of character to the first book of Fête galantes, the Cinq Poèmes de Charles Baudelaire, and assorted individual numbers. Emblematic of her approach to the songs is her ravishing take on the Chansons de Bilitis: pure and tender in “La Flûte de Pan,” brimming with barely-restrained emotion in “La Chevelure,” and icy mystery melting into resonant fervency in “Le tombeau de Naïades.”

The singers are joined, respectively, by pianists Eugene Asti and Alain Planès, whose accounts of their corresponding “accompaniments” (the term is a bit of a misnomer when discussing the thoroughly involved keyboard writing in these songs) overflow with color and a terrific command of Debussy’s style. Each get a handful of solo moments, too: Planès performs three movements from Images oubliées and Asti plays the haunting Les soirs illuminés par l’ardour du charbon. These short interludes function as, essentially, entr’actes that seamlessly separate the vocal selections – just one more thoughtful touch on an album already full of them.