You are here: Home / Books / Book Interview: The Story of Robert Pollard and Guided By Voices

The author’s combination of knowledge and experience has resulted in a boisterous chronicle of one of indie rock’s least probable but most luminous and unremitting stars. 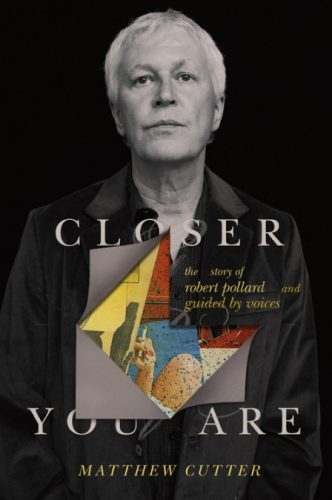 Dayton native Robert Pollard was a high school and college star athlete who seemed destined for the pros before his interest in sports waned even as his ability did not. Having never been a particularly dedicated student, he ended up teaching for 14 years in his hometown. Finally, although he had no musical training of any form, he became what Pitchfork called a “veritable indie rock icon” in 2000 and quite possibly the most prolific songwriter of the genre in which he works.

But as Matthew Cutter discovers in Closer You Are: The Story of Robert Pollard and Guided By Voices, little qualifies as textbook in “Bob’s” career, especially not the one that he has had in music.

Pollard was 37 years old when Guided By Voices’ breakthrough (relatively speaking) album was released. His first and pretty much only big payday came from an independent label that paid him $157,000 for five albums. A typical year for Pollard has long included the release of three or more full-length recordings of new material, be it under the GBV moniker, his own name, or that of one of his many side projects. As a result, Pollard has more box sets to his credit than a number of established musicians have albums, often because he has stockpiles of otherwise unreleased material.

Yet most people don’t know who Bob Pollard is. A handful of such folks might recognize the name Guided By Voices, but they won’t get much further by asking, “What do they sing?”

Nonetheless, the hard-drinking bandleader and his current collection of mates played a sold-out show late last month at The Sinclair (DigBoston’s review and photo gallery).

Cutter has authored the first comprehensive biography of Guided By Voices in more than a decade. He has been a fan for 20 years, is almost certain that he owns everything that Pollard has made available, and has spent several long stretches of time with Pollard during which “much” alcohol was consumed. (Plus, one of Cutter’s bands, Joseph Airport, once opened a show for GBV.)

The author’s combination of knowledge and experience has resulted in a boisterous chronicle of one of indie rock’s least probable but most luminous and unremitting stars.

The Stamford, CT, native and father of three recently spoke by phone to The Arts Fuse from his home in Rockville, MD.

The Arts Fuse: You had literally thousands of titles and lyrics to choose from in titling your book. Why did you choose Closer You Are?

Matthew Cutter: As you know, there’s a Pinocchio metaphor or parallel running through the book. My original, and a terrible, title was Pinocchio in the Shark’s Belly: The Story of Robert Pollard. It was pitched to the publisher with that title. And later on, my editor at Da Capo, Ben Schaffer, and my agent, Paul Lucas, we both saying, “Well, usually with these music books, you kinda want to choose a song title.” So I thought, let me look at one of my favorite album, Alien Lanes, and see if there’s any stuff on there. I thought, “‘Closer You Are’,” that fits really well. That’s high on my list. But then I picked about 10 or 12 more possibilities.

Then a friend of mine, Jeremy [Sanborn, also a bandmate of Cutter] and I were in Dayton, and we happened to hanging out in a bar drinking with Bob that day. And I said, “Okay, Bob, let me lay some of your song titles on you, and think of these as possible titles for the biography. Number 1, ‘Closer You Are’,” and his eyebrows went up, and he looked over at Jeremy and Jeremy nodded, and they both kind of like, “That’s a good one.”

Then I went through 12 or 15 more and when we got the end, we all said, “I don’t think there really is a better one that we suggested here than ‘Closer You Are’.”

To me, it kind of encapsulates the idea of Bob becoming this world-famous rock star and yet he never left his hometown … It’s no so much “The closer you are/The quicker it hits you,” but “The farther you go/the closer you are.”

AF: What does it say about Pollard that he “resented” teachers and coaches but became both, and that he had a “fuck lessons” policy toward music yet he is one of the most prolific songwriters of the past several decades?

MC: Without getting too much into his head, what that suggests is that — and even as I’m about to say this, I realizing that I’m like this, too — Bob is the type of person who resents authority but would rather have the authority so he can do things the way they need to be done. (laughs) I never really thought about it, but that’s what it seems like. Bob is not big for authority figures or authoritarianism at all.

There’s the famous quote from one of their shows. A Chicago Metro show in 2001 or 2002, at the height of the group’s powers. He gets on the mike between songs and says, “You can tell your boss ‘Fuck You’ from me Bob Pollard! Cos I don’t like work, and I don’t like school, and I don’t like when you gotta do things you don’t wanna do!” That’s probably my favorite in-concert quote from him. I think that encapsulates his view.

AF: You write in Closer You Are, “Bob clearly loved Dayton…but to a large extent that love was unrequited. He’d never be the hometown boy who made good.” What is the current status of the relationship between Pollard and the Birthplace of Aviation?

MC: Bob stays in Dayton, he loves Dayton, he doesn’t want to go anyplace else, but nobody will talk more shit about Dayton than Bob.

As far as the people of Dayton go, there are still people who still don’t like him. Bob said it himself, I quote him in the book: “Imagine a bunch of people in high school who were total jocks and assholes and then they became Guided By Voices.”

Everybody in Dayton knows Bob, and they are aware of his accomplishments. But in Dayton he’s not “Robert Pollard world famous rock star,” he’s “Bobby.” There’s a recognition of what he’s done, but they’ve always known him as Bobby. And there’s the fact that Bob himself is a normal guy in a lot of ways. He grew up in a blue-collar neighborhood in Dayton, he goes to the bar and drinks and hangs out with his friends and watches football. He doesn’t walk around acting like everybody needs to pay their respects or anything like that. He really is just Bobby.

https://www.youtube.com/watch?v=uGYvY2unqVo (“Huffman Prairie Flying Field” from 2004’s Half Smiles of the Decomposed)

AF: You also say in the book, “Bob wrote songs at the same rate that he breathed.” You quote a New York Times article :“The man can write a classic rock song every time he blinks.” Pollard himself once claimed that he could write five songs while taking a shit, which a writer for DigBoston recently referenced and added, “Clearly, the man is not constipated.” Which do you think best describes Pollard’s songwriting fecundity?

MC: That original quote that that writer was referring to is the most famous way in which it has been highlighted: He could write five songs while he’s taking a shit. In one interview Bob responded, “and three of them are good!” There’s a reason why that’s the best encapsulation of this sentiment for me. You’re talking about creating something of artistic value and worth, which is a lofty ideal for most people. But it’s wedded to the idea of something everybody does, which is take a crap. 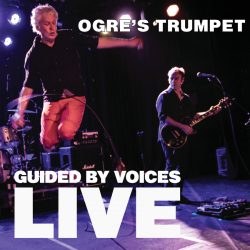 MC: It was all a matter of space. As William Faulkner said, “In literature, we must kill our darlings,” so I had to make a lot of painful cuts. All sorts of factors go into it. How much is the book gonna cost? How long is it gonna be? How much does the book weigh? How much does it cost to ship a copy of it? All this stuff kind of factors in. There’s definitely an optimum size the publisher wants in order to have a chance of the the book sells well.

At one point Bob said to me, “I want you to make it one page longer than James Joyce’s Ulysses.” But there were economic and editorial reasons that we couldn’t do that. I hope to do a revision or an expansion at some point in the future. There’s a lot more to be told, but also I think that the full legacy of this current lineup isn’t clear yet.

AF: What is your favorite album from each era that you devote a chapter to?

MC: Of the early albums, what Bob calls the “vanity albums” they were putting out themselves, my favorite is either Same Place the Fly Got Smashed or Self-Inflicted Aerial Nostalgia. And geez, the classic lineup, my personal favorite would probably be Alien Lanes. Getting into the next era, probably Universal Truths and Cycles. As far as that last batch, Space Gun is a big favorite, but I have to say, Zeppelin Over China is coming next February and it very well could be my favorite Guided By Voices album of all time. Maybe my favorite rock album of all time, except The White Album’s up there, too.

AF: Which of the numerous GBV casts of players do you think was the best?

MC: I’m a fan of new things. It might be controversial among some people, but I have to say the current five-member lineup…All the lineups have their charm, but there’s  just something about the current lineup. How well they get along. Superb, superb collection of musicians, that’s another thing. A superb collection of singers. This lineup is the first time I’ve ever hear Guided By Voices do three or four or even five-part harmonies on stage and be more than merely competent — they are really good. And I should say it is a six-member lineup because Travis Harrison, their sound man and producer and recording engineer, is really the sixth man in the band.

The guys have huge smiles on their faces when their playing on stage because they’re having so much fun. I don’t think I’ve ever seen any GBV lineup that has less drama and more pound-for-pound talent than the current lineup.