You are here: Home / Books / Book Interview: Robert W. Fieseler on the legacy of the “Tinderbox”

One of the few books that examine the largest mass killing of gays and lesbians in the United States until the 2016 massacre at Pulse.

Tinderbox: The Untold Story of the Up Stairs Lounge Fire and the Rise of Gay Liberation by Robert W. Fieseler. Liveright Publishing Corporation, 343 pp. $26.95 (hardcover).

Robert W. Fieseler will be speaking at Trident Booksellers and Café (338 Newbury Street, Boston) on October 16 at 7 p.m. 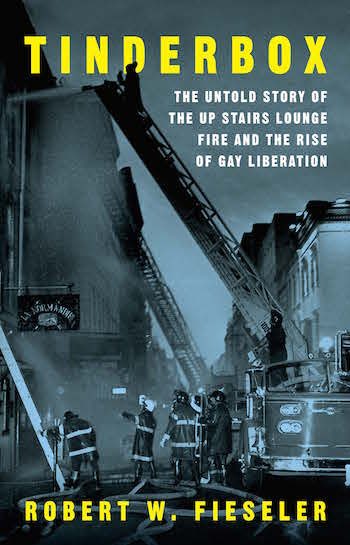 Journalist and first-time author Robert W. Fieseler was not born in Boston and no longer lives there.

However, he will forever have a special relationship to the city in he lived for four years before relocating to New Orleans in August.

“My husband [whom he wedded at Walden Pond] had gotten into graduate art school at the School of the Museum of Fine Arts,” the Chicago native and proud guncle said in a recent phone interview with The Arts Fuse.

“Meanwhile, I was writing a book about this historic event that occurred in New Orleans. Probably about half the time, I was down in New Orleans staying in the guest room of close friends of ours … Then when it came time to write the book, I discovered the Boston Athenaeum, and I wrote the whole thing there, essentially.”

Fieseler is referring to Tinderbox: The Untold Story of the Up Stairs Lounge Fire and the Rise of Gay Liberation, his first book, which Liveright published in June.

One should not be blamed for having never heard of the Up Stairs Lounge, which was a bar in New Orleans’s French Quarter whose clientele were homosexual men. A room therein also served as the meeting place for the Big Easy’s chapter of the Metropolitan Community Church (MCC), which Fieseler describes as having “injected a Christian sensibility into the early character of Gay Liberation.”

On June 24, 1973, the Lounge went up in flames. 32 people perished, three of whom “were charred so horrendously that they could never be identified.”

In 1975, the New Orleans fire marshal determined that it was an act of arson by the person to whom all of the evidence pointed. However, District Attorney Harry Connick—father of the future music superstar—refused to accept this conclusion and no trial ever took place.

Connick’s decision was one of many acts of commission and omission on the part of politicians, law enforcement officers, journalists, the Catholic Church, and even members of the gay community (and their families) that caused the disaster to go inadequately investigated, underreported, and forgotten about.

Fieseler argues that this was because of the sexual orientation of the people who were the victims of the tragedy.

“The closet…grew to function as a governing institution for nonheterosexual life in twentieth-century America,” the author writes, “which explains how a makeshift bar like the Up Stairs Lounge could burn to its foundations and, in doing so, disappear from memory.”

The fact that the members of the affected community were living lives that they and the involved authorities wished to keep secret explains why the deaths of these 32 Crescent City residents barely registered a blip, considering the carnage. By contrast, “a fire at the Rault Center office building that killed six people in November 1972 received greater news coverage for a longer period of time.”

“Local and national television channels would dedicate just a few minutes of on-the-scene coverage to the Up Stairs Lounge,” Fieseler explains, “in which the survivors were interviewed with cameras to their backs, due to reporters’ fear of legitimizing the gay lifestyle and victims’ fear of outing themselves.”

These mutual interests reinforced one another and conspired to keep the story as hushed as possible. Fieseler observes that this could, at least in part, be attributed to what he calls “the human phenomenon of denial.”

“This seemed to be a kind of denial that consumed an entire city,” he says, “which was this problem of sexual difference that existed in a city that otherwise had a unique relationship to the vices. It seemed to extend, actually, beyond New Orleans into a kind of national ethos, it seemed to me. This was an event that not just a unique and idiosyncratic urban culture didn’t want to speak about, but that confounded newspapers and politicians nationally.”

Evidence of the bemusement of reporters and editors was their determination to keep the word “homosexual” from appearing in print.

This effort to squash the story was so successful that “The deadliest blaze on record in New Orleans history…had become so downplayed that a 1991 exhibit at the Louisiana State Museum about historic fires in New Orleans managed to exclude the Up Stairs Lounge entirely.”

So how did Fieseler himself first become aware of such an obscure event?

“I learned about it through a professor [Nicholas Lemann] at the Columbia Journalism School who’s from New Orleans and was a baby reporter in New Orleans in the ’70s, the summer that the Up Stairs Lounge fire took place,” he says. “He’d reported stories in the same neighborhood that summer, some of which fell side-by-side Up Stairs Lounge stories.”

In addition to being the most fatal fire in the history of The City That Care Forgot, it was also “the largest mass killing of gays and lesbians in the United States until the 2016 massacre at Pulse.”

“In fact,” Fieseler reveals in Tinderbox, “more stories about the Up Stairs Lounge appeared in major news outlets after the Pulse shooting than in the previous four decades.”

(I do not want to give away a crucial part of the book, but it bears mentioning that the Up Stairs Lounge fire was, by all indications, not an act of terrorism by a deranged homophobe.)

This was not the first inkling that the calamity had been or would be completely unremembered.

On the fire’s fifteenth and twentieth anniversaries, the Times-Picayune included only cursory mentions and the city did nothing to publicly commemorate the occasion.

On the twenty-fifth anniversary, however, the city’s paper of record “devoted multiple pages to the tragedy and the purpose of its legacy.” There were also two significant public events. One was a state-sponsored panel called “Remembering the Up Stairs Lounge Fire,” which was arranged by the curator of the museum that had excluded the inferno from the aforementioned highly pertinent exhibit.

Five years later, a plaque was placed at the site of the Up Stairs Lounge.

“The laying of the plaque at the 30th anniversary,” Fieseler tells me, “was the most vital act. Placing a permanent marker allowed the story of the Up Stairs Lounge to be discovered, to be seen, and discussed on a daily basis. So people passing by the site knew that something had occurred there and could ask about the story.”

Tinderbox is a fine first book, but the volume is not clear to what extent the Up Stairs Lounge fire contributed to the “rise of Gay Liberation” that is mentioned in the subtitle. In fact, Fieseler emphasizes—via his own analysis and quotes from others—the muted impact of the fire and its aftermath in contradistinction to the Stonewall Riots, which happened almost exactly four years earlier in New York City.

“Stonewall…became a vital symbol and rallying cry for what was at the time called the Gay Liberation Movement,” Fieseler says. “So you had really a national movement sparked out of Stonewall.”

“With the Up Stairs Lounge fire, after the first several months, none of that occurred … Gay Liberation nationally was incredibly aware of what had happened in New Orleans, and people were responding to the deaths of their gay brothers. But New Orleans itself and even aspects of queer New Orleans itself were not interested.”

It seems unlikely that the author can have it both ways, i.e., the Up Stairs Lounge fire was both unjustly forgotten and made a sizable contribution to Gay Liberation.

But, this is a negligible flaw. Tinderbox is essential reading for those who are the slightest bit interested in its topic specifically or in lesser-studied episodes in American history. Fieseler’s study is a major contribution to the literature on what is arguably the principal civil rights issue of the 21st century.