You are here: Home / Books / Poetry Review: The Devolution of Eileen Myles

One of the fears of poets and, I imagine, all writers, is that you’ll reach a certain age and you’ll run out of gas. 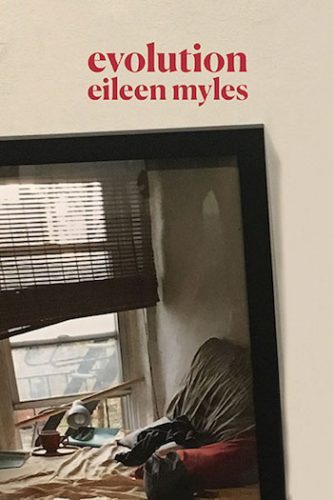 Eileen Myles is the rarest of birds: a celebrity poet. She is well-known, partly by her associations. She hung out with Ginsberg and Berrigan back in the ’60s, and in the recent past, she was girlfriends with Jill Soloway, the writer and producer of Transparent (a character on the show was modeled on Myles). A couple of her poems were quoted on the show. Myles wrote an essay about getting paid to write poetry in which she talks about having to ask for money for the poetry used on the program. She also talks about selling a poem in exchange for a room at an inn in North Carolina. Good deal.

Although Myles was born in Cambridge and went to Catholic school in Arlington, she is a New Yorker by temperament and she has that openness in her writing that you will experience if you happen to engage someone from that city in conversation. A recent piece in the New York Times by Irish transplant Maeve Higgins lamented that there’s no small talk in America. What she meant was in New York. New Yorkers will jump right in and tell you anything. Myles’ writing is like that. In some cases, this confessional quality is good because the writer appears both vulnerable and likeable. In other cases, the lack of boundaries can become self-indulgent and narcissistic.

I became an Myles fan when I read her poem “An American Poem” in which she responds to people in New York, who, upon learning she is from Boston, want to know if she is related to the Kennedys. In the poem, Myles writes as if she is indeed, a reluctant member of the Kennedy clan:

I was born in Boston in
1949. I never wanted
this fact to be known, in
fact I’ve spent the better
half of my adult life
trying to sweep my early
years under the carpet
and have a life that
was clearly just mine
and independent of
the historic fate of
my family.

She goes on and ends the poem like this:

It is not normal for
me to be a Kennedy.
But I am no longer
ashamed, no longer
alone. I am not
alone tonight because
we are all Kennedys.
And I am your President.

So her response is witty and very informal but fresh and inventive. If you haven’t read the rest of the poem, it is available for free online at the Poetry Foundation site.

Chelsea Girls, a fiction/memoir by Myles is also worth reading, particularly if you are from the Boston area. She starts it with this story about her friend being arrested at a party. Myles chases the arresting officer out of the house and jumps on his back. When she is handcuffed, she tells the police, “You can’t arrest me, I’m a poet.”

Myles’ new book, Evolution, is two hundred pages long, made up mostly of poems and a couple of essays. One of the fears of poets and, I imagine, all writers, is that you’ll reach a certain age and you’ll run out of gas; like an athlete, you just won’t have  the oomph anymore. Stephen King once said that the problem with being famous is that you’ll drink your own Kool-Aid: you’ll believe everything you write is excellent because you wrote it. In Evolution, Myles suffers from both of these problems. Here’s the beginning of the book’s first poem:

Is this poetry or a journal entry? Is it interesting? She is writing about being famous I guess. Five pages later the poem concludes:

….And
something
new starts
up in
my building
a different
sound.

Myles is using the line breaks with one, or two word lines to create surprise. But, really, there just isn’t much going on here. I was looking forward to reading Evolution, but I could have made better use of my time by say, cleaning my room or taking a nap. You just never know what you’ll run into today when it comes to poetry. There is no reliable magazine or journal or website that you can go to and find high quality verse. I suppose it is like this in any given age. It is only after we’re dead — and our descendants have sifted through the rubble — that they will figure out our age’s Emily D and Walt W.