You are here: Home / Books / Book Review: “Never Anyone But You” — Fiction to Treasure

Rupert Thomson’s Never Anyone But You is a quiet, expert, and inestimably engaging novel. 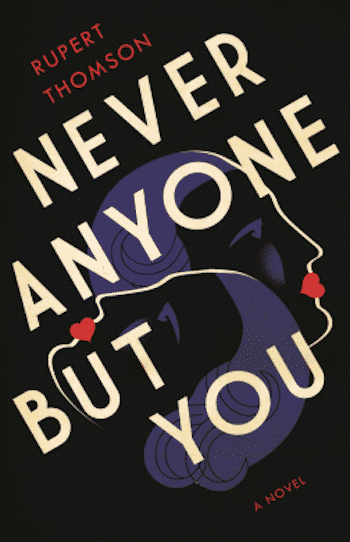 Sometimes, even in 2018, a novel is just good. Sometimes no postmodern bells and whistles, no innovative forms or signposted influences, are necessary. Sentence by sentence, certain novels build an impression of life so fine and real that the reader mourns to leave it behind. These novels refute the weary statement that the form is dead, that it was laid to rest by someone in a prior century, that ordinary narrative realism has nothing to offer jaded readers these days. Sometimes, a just-plain-good novel is exactly what a reader wants.

Such is Never Anyone But You, a quiet, expert, inestimably engaging novel by Rupert Thomson. The book is based on the lives of the female Surrealist artists Marcel Moore (the first-person narrator) and Claude Cahun, who were artistic collaborators and lifelong lovers. Under their real names, Lucie and Suzanne, the two artists fall in love while still teenagers. They carry on an affair for years under the noses of their families until their families, unexpectedly, join: Suzanne’s widowed mother marries Lucie’s divorced father, and the women become stepsisters, which is the cover they use to live together for the rest of their lives. Suzanne becomes a visual artist and takes the name Marcel Moore. Lucie chooses to be a writer and a kind of proto-performance artist, inventing the androgynous identity of Claude Cahun. (Cahun’s gendered pronouns vary in non-fiction features about her, but Thomson’s novel uses feminine pronouns throughout.) Photos of Cahun remind the modern-day viewer of Cindy Sherman, drag artists, Francesca Woodman, and especially Gillian Wearing.

Never Anyone But You reads like a fictional biography; the prose, though concise and flowing, is often straightforward to a fault. Through Marcel, Thomson spools out the history of the Surrealist movement of the early 20th century, touching on its twists and personnel changes across time. Some paragraphs read a bit like Wikipedia. However, the author’s insights into the main characters go beyond his research: they are highly novelistic. The private lives of the two central figures are recounted in intricate detail, and conversations with, for example, Dalí and Andre Breton (which certainly took place) are reconstructed in full.

“Of course.” He stood up a little straighter, eyes widening. “I am Dalí.”

Thomson assumes the reader has a preexisting awareness of how thoroughly the bohemian Paris of the 1920s and 1930s has already been covered by Hemingway, Stein, Miller, Nin, and even Woody Allen. His rendering is neither flashy nor imitative; again, it’s personal, beholden to the interior landscapes of Marcel and Claude rather than the artistic sparkle of the era.

Sometimes, though, just sometimes, Claude would become me and I would become her—while making love, for instance, or dancing—and it was unforced and seamless, it was comfortable, this reversing of our roles, this intermingling of our attributes and our desires.

Later, at the outbreak of World War II, Marcel and Claude move to the island of Jersey. Over forty by now, they seek to live quietly after the whirlwind of Paris. Ironically, it’s on Jersey that the novel gains a new momentum: the women launch a secret propaganda campaign to convince the Nazi soldiers occupying the island of the harm of Hitler’s regime. (This section of the book, the everyday fascism of the citizens and soldiers on Jersey, has significant resonance with our current political predicament.) Claude and Marcel are arrested and held captive for nearly a year; this section of the book has the feel of Heloise and Abelard, as the women are held in separate cells too distant for communication. They are condemned to death, but V-E Day intervenes.

After their release, ten years pass desultorily. Claude’s health declines, and she dies, in a sequence that compares to Beth’s death in Little Women for unforgettable literary heartbreak.

There are people who claim you can see souls leave the bodies of the dead. They talk about a field of energy that hovers in the air…When Claude stopped breathing, not long after the bath, I felt something go—but not from her, from me. Can the love somebody has for you be tangible like that, there one moment, gone the next?

For the following fifty pages, and twenty years, Marcel lives on. She sees ghosts, moves house, makes friends, tries to find life worth living. Without her companion, the world is colorless. She does not dwell on the past, but she cannot live in the present—not without Claude.

A long-term companionship, even if its participants are artists on the edge of a still-fascinating century-old avant-garde movement, is hardly the material for a wild and thrilling novel. The pleasures of Never Anyone But You are, like the narrative’s focal companionship, discreet, private, and totally immersive. Thomson is rendered nearly invisible next to the power and endurance of the relationship he’s writing about. And it is his consistent attentiveness to the interiors of these women and their lives that makes this such a lovely reading experience. He’s written the kind of book all incorrigible novel addicts will treasure.