Paavo Järvi and the Estonian Festival Orchestra present a probing and excellent version of Shostakovich’s Symphony no. 6; Andrew Manze and the NDR Radiophilharmonie continue to do right by Mendelssohn’s symphonies. 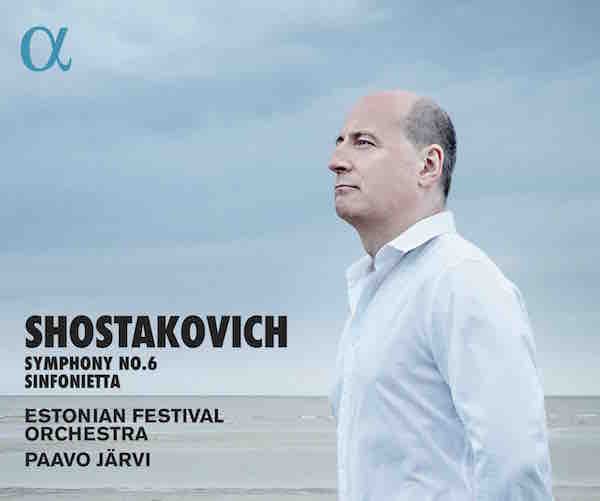 Shostakovich’s Symphony no. 6 is, arguably, his strangest and most difficult multi-movement symphony to pull off in performance. The problems owe both to the score’s structure – a mammoth first movement followed by two shorter ones – and the music’s expressive content: the opening movement is a searing, if unbalanced, essay, followed by a pair of raucous, irreverent episodes. It’s a piece that’s thrown more than a few fine conductors for a loop.

Just don’t tell that to Paavo Järvi and the Estonian Festival Orchestra (EFO), whose new recording (for Alpha) of the piece (paired with the op. 110b Chamber Symphony) is probing and excellent.

You know this is a great Shostakovich Six from the way Järvi and his crew approach that perplexing first movement. On paper it’s lopsided, with a rather flowing first third followed by spare, recitative-like writing over much of its next two thirds. Yet you don’t really notice that structural instability in this performance for a couple of reasons.

The first is tempo. Järvi’s is a reading that is notably fluent and never dawdles. At the same time, it doesn’t rush over anything it shouldn’t. His sense of pacing throughout is logical and reasoned – but, at the same time, well-attuned to the music’s expressive features. The opening section offers plenty of momentum, but so do the soloistic parts that follow: there’s a sense of heartbeat and pulse in this interpretation that brings this complicated movement impressively to life.

The second characteristic is the EFO’s playing, which is – for lack of a better word – brilliant throughout. String tone is warm but uncompromising. Woodwinds and brass are perfectly secure, pitch-wise. And the percussion offers a sort of Mahlerian menace that jumps out powerfully. The movement’s moments of true warmth – the chorale that appears near the end, the reprise of the opening material – speak with an intensity and conviction that’s thoroughly lived and entirely of the moment.

So, in their different expressive ways, are the subsequent movements. The second, opening with a superb account of its rowdy clarinet solo, wears itself out sooner than not; the last, is taken at a breathtaking clip and seems to banish the foul memories of the first movement. Only it doesn’t quite – which is rather the music’s point.

Filling out the disc is Abram Stasevich’s arrangement of the String Quartet no. 8 for string orchestra and timpani. Maybe it’s the addition of the drum – more likely it’s the sheer ferocity of the EFO’s playing – but I found this a far more convincing adaptation and orchestral reading of the piece than Dmitri Sitkoevsky’s more familiar strings-only setting. As in the Symphony, the orchestra’s playing drives furiously (the second and third movements, in particular, are ferocious) while the music’s blistering pathos burns through every queasy phrase.

In all, this is an unsettling performance of a deeply disturbing, if familiar, piece. It’s one with which you really can’t go wrong. 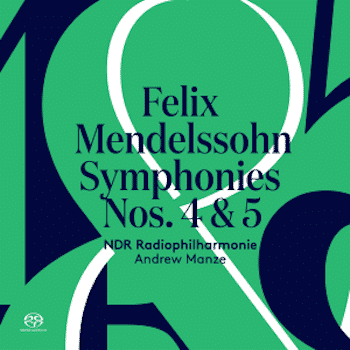 One of my favorite recordings of early 2017 was the first installment of Andrew Manze’s Mendelssohn complete symphony cycle. Pairing the lesser-known Symphony no. 1 with the more familiar “Scottish,” it was fresh, spirited, and fun – at times quite stirring, too. How does the next volume (on Pentatone), featuring the Symphonies nos. 4 and 5, fare?

In some ways, Manze and the NDR Radiophilharmonie (NDRR) have a steeper hill to climb on this album, given that both scores are abundantly familiar, especially the Fourth (“Italian”). They make their task a bit easier by performing an edition of the Fifth (“Reformation”) Symphony by Christopher Hogwood that reinserts some material Mendelssohn had cut in his many revisions of the piece, but their “Italian” is the usual one.

That doesn’t hinder their playing, though. On the whole, Manze’s Fourth represents a genial Italian sojourn. His tempos are, generally, a bit slower than Yannick Nezet-Seguin’s in his recent reading with the Chamber Orchestra of Europe. But nothing is sluggish and, just when the music starts threatening to turn overlong (in parts of the opening movement, especially), Manze pushes things ahead just enough to ensure it doesn’t get bogged down.

The outer movements are vigorous and lean, the first offering spades of Mediterranean warmth, the finale plenty of rhythmic bite. In the middle ones, Manze draws out the music’s shifting tonal colors; the NDRR winds acquit themselves particularly well in the second, while the third is conspicuously graceful.

This “Reformation” Symphony is likewise spacious, tempo-wise, though it never feels slow: the spots where Manze most allows for breadth – the searching third movement, the chorale introduction to the fourth – are marked by a consistently strong sense of color and orchestral playing of emotional intensity.

Best of all, the Hogwood edition gives the piece a sense of novelty; the NDRR certainly plays it with plenty of verve and freshness. The most substantial change in this version is the inclusion of a lengthy segue into the “Ein’ feste Burg” statement at the start of the finale, though there are small phrases inserted into other spots (mostly the first movement) that engage the ear agreeably.

The whole of the NDRR’s reading has many of the hallmarks of period performance – lithe energy, clean textures, judicious use of vibrato, resonant open strings – and that helps the music to jump off the page. As in the “Italian” Symphony, the “Reformation’s” outer movements are plenty spry and colorful, while the second dances amiably. The short third comes across with particular weight and depth: it’s no toss-off in Manze’s hands; rather it’s the emotional heart of the Symphony, its brief woodwind interjections particularly refulgent. And the “new” follow-up to that movement, while it’s perhaps superfluous, provides a welcome bridge between the familiar sections.

In all, then, the second installment of this Mendelssohn cycle lives up impressively to its predecessor. The final part, comprising the rarely-played Symphony no. 2, is due out later this year.