You are here: Home / Books / Book Interview: Why Does Bob Dylan Matter?

“I see him as the greatest artist of the English language, it happens to be in song, of the second half of the 20th century and now into the 21st century.” 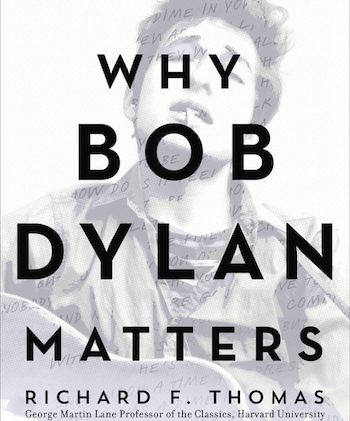 The academic interests of Harvard University’s Richard F. Thomas are unsurprising for someone who holds the title of George Martin Lane Professor of the Classics.

Latin literature, Hellenistic poetry, translation, intertextuality, reception, and historiography are, after all, the kinds of things that someone trained in the culture of certain ancient civilizations is sure to find exhilarating.

Therefore, visitors to Professor Thomas’s Harvard website are likely to do a double-take upon reading “Bob Dylan” smack dab between “Translation” and “Intertextuality” in his list of research areas.

Dylan is not simply a personal interest to Thomas. Every four years since 2004, he has taught a class called “Bob Dylan” to 12 carefully selected first-year students.

Little did he know when he began conducting the seminar that its subject would be the 2016 recipient of the Nobel Prize in Literature or that the New York Times would one day describe it as “the coolest class on campus.”

Classroom material includes not only music and video clips, but the movies Masked and Anonymous (2003) and I’m Not There (2007) and Dylan’s 2004 memoir, Chronicles, Volume One.

Thomas left his native New Zealand in the early 1970s to pursue his Ph.D. at the University of Michigan. Before arriving in the States, however, he made a stop in the Mediterranean Sea.

“I sold off my album collection to travel in Greece on my way to graduate school,” Thomas said. “Blonde on Blonde and The Songs of Leonard Cohen were the two albums I held on to.”

Blonde on Blonde was the double album that Dylan released in 1966. Among its classic contents are “Rainy Day Women #12 and 35,” “Visions of Johanna,” “I Want You,” and “Just Like a Woman.

HarperCollins published Thomas’s book Why Bob Dylan Matters last month. The classicist/Dylanologist recently spoke by phone to The Arts Fuse from his Harvard University office about the book, the class, and the man himself.

The Arts Fuse: When did you first begin to seriously study Bob Dylan as a scholar?

Richard Thomas: After 2001, when Love and Theft came out, with its  unmistakable trace of Virgil’s Aeneid on the song “Lonesome Day Blues.” I’d been thinking about him as being similar to my poets in the way he had layered other songs and other literature since 1997, with Time Out of Mind. But it was that specific intertext, if you like, on “Lonesome Day Blues” that got me going. And he intensified that manner of composition in 2006 with Modern Times and Tempest in 2012. I put in for the first seminar in 2003, so it’s really in this millennium. But for probably 20 years before, back into the ’70s, I was thinking of him aesthetically in similar ways to the way I think about my poets; Roman poets, in particular. Catullus, Horace, and others.

AF: How did the opportunity to design a class entirely devoted to Dylan come about?

Thomas: I was chair of my department, and the deans wanted more small-group faculty instruction of first-year students. So instead of asking a junior faculty to offer a freshmen seminar, I though that I would start doing it. So, in 2002, I did one on poetic translation. And then I thought, having heard the Virgil on “Lonesome Day Blues,” why don’t I put together a Bob Dylan freshman seminar. I submitted that in 2003;  I do it every four years because it takes me away from teaching Greek and Latin which is my main job.

I happened to be doing it the day that the Nobel was announced, October 13, 2016. I woke up and looked on the internet and there was the announcement. The New York Times called about an hour later, and they were in the classroom that afternoon with a photographer and a stringer that they sent.

AF: Do you think that Dylan would be taken seriously by more scholars if he had written poetry rather than popular songs?

Thomas: He’s a songwriter, not a poet. The Nobel Committee said Sappho wrote poetry that was accompanied by music, so she was a songwriter. We don’t have the music, but we can still read her as poetry. You can still read Bob Dylan as poetry, is what was claimed. Dylan himself pushed back against that, gently, in his June 2017 Nobel lecture where he said, what I do is not literature. You can’t just read what I do, you need music. So he was happy enough to get the prize, but he wasn’t going to go along with the thesis that you could just read him.

Some of the songs, “Not Dark Yet,” for example, you can read as poems. But without the music —  his voice expressing the lyrics — it’s not Bob Dylan.

AF: Why does it make sense to you that Dylan won the Nobel Prize?

Thomas: I see him as the greatest artist of the English language, it happens to be in song, of the second half of the 20th century and now into the 21st century. I love Robert Lowell, but I think he has already outlasted Robert Lowell.
The 2017 Nobel [winner, Kazuo Ishiguro] was asked what he felt about Bob Dylan winning it. I assumed the interviewer expected him to say that he was glad that it was back to a novelist. What he in fact said was it was a fantastic choice, that he was his hero growing up, and that if it weren’t for Bob Dylan he probably wouldn’t have become a writer.

AF: Are there any instances in which you believe that a cover version surpasses Dylan’s original?

Thomas: I’m not sure that I think any surpasses it. I probably do prefer the take on “Percy’s Song” by Fairport Convention, which we heard long before Dylan’s version came out.

The soundtrack of Todd Haynes’s I’m Not There contains a couple of covers that come close. Richie Havens, at the Madison Square Garden 30–year anniversary [concert] in ’92, did “Just Like a Woman,” and that’s a fantastic version.

AF: Would you want to have Bob Dylan speak to your class if he were willing to do so?

Thomas: I did actually ask his manager, Jeff Rosen, in 2004. I’d been in touch with him for years. He’s been very helpful regarding research issues. I emailed him, asking if Bob come to the seminar. And Rosen replied that ‘Mr. Dylan would be embarrassed to be at a class that was focused on him.’ That was a nice way out of that!