You are here: Home / Books / Poetry Review: Pierre Reverdy’s “Song of the Dead” — Imprisoned in Life

Despite one’s aspirations to another kind of reality (and Pierre Reverdy long contemplated the Christian alternative), one is forced to return to one’s fetters. 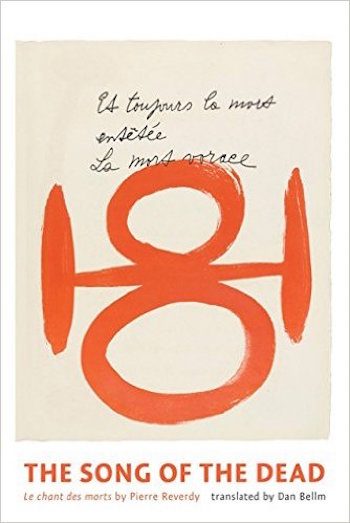 I’ve already written for The Arts Fuse a long article about Pierre Reverdy (1889-1960), an essential and enduring French poet who participated in the origins of the surrealist movement, held a highly personal vision of Christian spirituality, consorted with Pablo Picasso and other modernist painters, and whose particular way of constructing imagery is still much studied by younger poets. In that more general article, I review the useful bilingual anthology of his work published two years ago by New York Review Books.

Let me now focus on one of the poet’s most important collections, Le Chant des morts, which has been finely translated by Dan Bellm for Black Square Editions. The French original has quite a story behind it. Reverdy wrote this series of forty-three poems toward the end of the Second World War, specifically in 1944-1945. His handwritten manuscript, including corrections, was faithfully reproduced and shown to his friend Picasso.

The artist responded to the sequence by placing broad, sometimes arabesque-like brushstrokes in blood-red ink—curves, circles, lines, dots—around and between the poems. These thick, abstract signs, one of which appears on the cover of this new American edition, The Song of the Dead, suggest letters or characters from an unknown alphabet or language, all the while seemingly signifying bones and blood.

This pictorial imagery invoking bewilderment and slaughter, as well as pitting the abstractions of life, language, and hope against the brute facts of living and dying, is appropriate to the theme of war and disaster developed in the poems. For the same reason, Reverdy’s poetry cannot be classified as purely realist. Despite its apparent lexical simplicity, his poetry is multifaceted. As in his other books, “reality” must be sought on another level. Determining what this level is, and where it might be found, challenges every reader of the poet’s oeuvre.

In “Prison,” which is included in The Song of the Dead, the poet notably points to “Images / Of images / With no reality to nourish them.” Yet this is not to imply that he cannot also write precisely of the facts of life during the German occupation of France. In his case, he had already long declared that he had “freely chosen God” and moved (in 1926) to the village of Solesmes, near the Benedictine Abbey of Solesmes (in western France). But he was forced to turn over his house to the Germans during the Occupation and the years traumatized him, as they did so many others. Here are a few lines from “The Thread of Fire”:

All my blood like vinegar
I’ve taken my measure
On the knotted rope of hard luck
And now I sleep until the next alarm
In the tunnel riddled with false exits
In the deep night thick with cruelties
And the vile griefs that wait for me.

The Song of the Dead therefore builds into a complex sequence by appealing to both imagistic vividness, surely based on personal experience, and some conceptual abstruseness. Perhaps one key to unlocking Reverdy’s notion of reality, as he employs it here, is this aphorism included in Livre de mon bord, a volume of notes published by Mercure de France the same year (1948) as the first edition of The Song of the Dead: “There is nothing that is real per se, but only a movement whose perpetual continuity is the only reality.” The Song of the Dead is conspicuously “in movement” on several levels, including the way images emerge line after line, though not necessarily with transitions between them.

As to Picasso, his drawings for The Song of the Dead marked a departure from the figurative and cubist styles he had previously developed. However, while he was working on his illustrations, a technical problem arose because of the slowness with which he completed his half of the joint venture: his ink oxidized on the zinc plates that he had used to produce the drawings. He eventually had to begin all over again, during a period when he was concentrating on ceramics. Yet he was obviously moved by the poems and intent on finishing the collaborative project. In just a few days, between stints of decorating terracotta plates and pots, he made some 125 new drawings on zinc plates. This is the greatest number of drawings that Picasso ever devoted to a single book. The art critic and editor Stratis Elephtheriadis subsequently published 250 copies of this livre d’artiste in 1948 at his legendary press, Tériade, choosing to reproduce Picasso’s bold, semiologically enigmatic drawings on the handwritten manuscript instead of on a printed text. 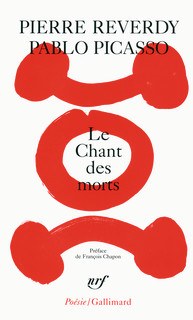 This livre d’artiste is fascinating in that it provides some insights into the creative processes of both participants: first of all, Reverdy’s manuscript that he had shaped through corrections; and then Picasso’s brushstrokes that often seem to be seeking forms or sketching out primitive, rudimentary forms. Indeed, a lack of unity and wholeness, a sense of dissociation and dismembering, the inevitability of fragmentation—in the outer world at war, obviously, but also in the poet’s inner world—constitute a recurrent theme for Reverdy in this book. “All these remnants of time sputtering in the hearth,” he observes in “Out of Proportion,” “One more map is ripped up / One more act misses the roll call.” Last November, Gallimard issued a very welcome paperback edition of the original edition.

By detailing this background story, I by no means intend to disparage this equally welcome American edition, which, like nearly all the French trade editions, provides only Reverdy’s poems. Yet it is important to keep in mind the dual origin of the book. Reverdy’s poetic sequence also marks a turning point for him or, at the minimum, represents the more lyrical trend of some of his later work. In “Head to Hold,” he writes: “A ray of honey in the wax / A bitter teardrop in your heart / Love come back in silence.” Such lines seemingly hint at a personal drama that was possibly taking place during the war years when Reverdy was, in addition, living in great poverty. Was he also perhaps involved in a “clandestine passion,” as an allusion in the last poem makes one wonder? Several passages combine physical and psychological imagery, as when the poet declares, in “Human Weight”: “So many lost men on the road / So many links snapped between the head and heart.” This same dichotomy between mental and physical suffering is also found in “The Last States of Starvation”:

The stomach ravaged by journeys underground
The dark intentions of the ages
With the weight of obscure feelings locked away
What does it mean in the end
Hunger and all the care it causes me.

In all events, a comparatively greater forthrightness obtains in these later poems written some thirty years after his first literary efforts, gathered in Prose Poems (1915).

Most important of all is the tension between negativity and affirmation that runs, unresolved, from the beginning to the end of this sequence. In the opening poem, Reverdy declares:

We must not despair of the roots of man
With his muscles of rubber
Or knock down the lamppost that screws the earth to the flagOr grind the lamp’s heart
The source of blood that goes stale
When the wound in the gut
Seeps out its treasure at the fringes of the stream.

A little further on, he similarly outlines a negative existential predicament where despair, following upon a sort of proof by the negative, a reductio ad absurdum, can nonetheless be excluded: “There’s no more room in starvation’s desert / For anything but hope.”

These lines recall the writer Tristan Bernard’s words to his wife when they were both arrested, as Jews, and taken away to the Drancy camp: “Up to now we have lived in anguish, now we will live in hope.” (About three weeks later, the aged couple was miraculously liberated from the camp through action taken by their friends, the actress Arletty and the playwright Sacha Guitry.) Reverdy cannot have known of Bernard’s statement when he was writing the poems of The Song of the Dead, but the same dialectics inform his book, otherwise quite full of despondency.

Which existential attitude wins out at the end? The last poem is titled “Life Pulls Me Along,” a rather optimistic perception. The poem is too long to quote in its entirety here, but its depiction of unshackled and then shackling chains certainly tantalizes. Is there perhaps an ultimate ambiguity?

At last the cold loosens its grip
The vice-grip of clandestine passions
[. . .]
One by one the prisoners’ shackles break
One step and all steps lead to the same place
It’s hunger
[. . .]
The hand always trembling at the edge of ruin
The frantic race in the freshness of the dew
In the reeds
In the tunnels of the mine
Darkness of a faraway mission
Barely time to think about it
And to stray powerless from the field of life
Each day to gain
To twist
To forge another link on the chain

To my mind, these last French lines (“À peine le temps d’y penser / Et sans pouvoir s’éloigner du champ de vie / Chaque jour à gagner / À retordre / À forger un anneau de plus à la chaine”), which are not entirely clear syntactically, can be interpreted somewhat differently: “Barely time to think about it / And without being able to stray from the field of life / Each day spent gaining / Twisting / Forging another link on the chain”). In other words, it’s not that one has “barely [the] time” to stray from life, but indeed that one cannot stray from life whatsoever. One is imprisoned in life, even as the poet would later declare, when referring to a few trips that he had taken to Italy, Spain, Greece, and Switzerland: “It never occurred to me to take advantage of those vague displacements.” Somewhere else in his oeuvre, he admits: “Here or there, everything is the same.” Whatever the most suitable solution in English might be for the final lines of The Song of the Dead, the conclusion is implacable: despite one’s aspirations to another kind of reality (and Reverdy long contemplated the Christian alternative), one returns to one’s fetters, provided by the warring world and doubly forged—let’s not forget the fact—by oneself.

John Taylor has recently translated Pierre Chappuis’ Like Bits of Wind: Selected Poetry and Poetic Prose and Catherine Colomb’s novel The Spirits of the Earth—both books available from Seagull. His most recent book of short prose is If Night is Falling (Bitter Oleander Press), along with two bilingual livres d’artiste published in France as joint projects with the artist Caroline François-Rubino: Hublots / Portholes (L’Œil ébloui) and Boire à la source / Drink from the Source (Voix d’encre). A new book of poems, The Dark Brightness, is forthcoming from Xenos Books. John Taylor’s website.