You are here: Home / Books / Book Review: The Poetry of Pierre Reverdy — The Search for Purity

Pierre Reverdy’s poetry that is suspicious of the deceiving beauty of words, hence its pared-down, elemental, stylistic qualities. 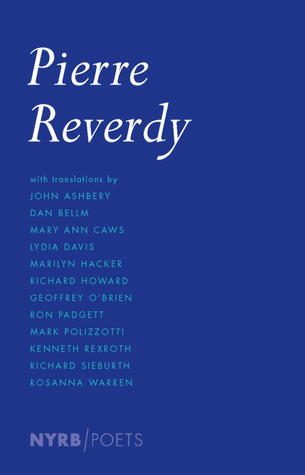 Pierre Reverdy (1889-1960) is a poet—Jean Follain (1903-1971) is another—who continues to be read by different kinds of contemporary French poets. I cannot prove statistically what I am asserting here, but conversations with French writer-friends, talks given by poets at literary evenings, allusions made in interviews, and the like, have long convinced me that Reverdy (and Follain) are still much alive in France—among French poets—because their poetry is considered to be vital.

If I am right, or even half-right, isn’t this a significant fact? After all, if literary history mirrors, to paraphrase Roland Barthes, what is taught in schools and universities—and Reverdy and Follain are little taught in France, let alone in the United States—doesn’t another, deeper, more essential kind of literary history take shape among poets and writers who (whatever their academic presence) continue to be studied by peers in subsequent generations? Multi-dimensional and nexus-like, such an imaginable literary history maps out the true affiliations, affinities, and apprenticeships.

But why has Reverdy remained a wellspring for French poets who, moreover, now have at their disposal a two-volume paperback Oeuvres complètes (Flammarion, 2010)? (This is another sign of Reverdy’s lasting pertinence.) Mary Ann Caws, the editor of Pierre Reverdy, a handy New York Review Books bilingual selection of seventy-nine poems and prose poems that has just appeared, offers insights into the fascinating qualities of his writing by noting its “elusive” nature. “His work is at once impersonal and intimate,” she observes, “crystalline and opaque, simple to the point of austerity.” She goes on to explain that “the landscape of his poetry is both instantly recognizable and, devoid of local specificity, imbued with an otherworldly strangeness. He is ‘a secret poet for secret reader,’ as Octavio Paz once described him, insisting on the necessity of parsing the silence, the empty spaces between what seems visible in the lines of his poems. Each feels like a fragment, and yet whole.”

This sums up well the mysterious effects that Reverdy’s poetry can have on us. It can be added that his poetics, at least in their most rudimentary formulation, possess a kind of purity that seemingly does not contradict other, dissimilar, poetics. This is probably because a search for purity informs both the relatively simple forms of his poems (or prose poems) as well as their very contents, which indeed often depict man’s grappling to become pure, to free himself from burdens, from various kinds of “heaviness.” These burdens include writing itself and, specifically, “books,” as in “The Spirit Goes Out,” rendered by Ron Padgett:

So many books! A temple whose thick walls were built with books. And inside, where I had entered, who knows how, I don’t know where, I was suffocating. [. . .]

With my fingernails I clawed at the partition and, bit by bit, I made a hole in the wall on the right. It was a window and the sun that tried to blind me couldn’t keep me from looking out. [. . .]

In “Backwards Forwards,” a prose poem translated by Richard Sieburth, Reverdy similarly writes: “The weight he drags behind him is great, but his legs are free and he is without ears.” Here is another revealing prose poem, “Heavier,” in John Ashbery’s version:

They waited for the man stretched out across the road to wake up. The curve of the night stopped at the thatched cottage which was still lit up, at the edge of the meadow, in front of the forest which was closing its gates. All the freshness inside. The animals were there only to enliven the landscape while all the rest walked.

For everything was walking, except the animals, the landscape and me, who with that statue, more immobile than the other one, was up there, on the pedestal of clouds.

Reverdy’s search for “lightness” and, as this latter piece shows, “verticality” shows forth as much in his poems as in the course taken by his life, most of which (beginning in 1926) was spent in Solesmes near the famous Benedictine monastery there (which is located near Le Mans and not “in the northeast of France, near the Belgian border,” as is stated in the Chronology of this volume).

For although Reverdy, as early as the end of the First World War, was close to the mostly atheistic or at least agnostic poets, writers, and painters who would soon found the Dadaist and Surrealist movements, he also converted to Catholicism, though by no means in any dogmatic way. His case somewhat resembles that of Max Jacob (1876-1944), whom he befriended in 1910. In the Chronology, one finds this arresting note for that year, when Reverdy leaves his hometown in the south of France, Narbonne, and settles in Paris:

Reverdy forms an especially close (and fraught) friendship with the poet Max Jacob, thirteen years his senior. He eventually inherits the latter’s lodgings a little father down rue Ravignan—the very room in which Jacob had seen an apparition of Christ on the wall in 1909, prompting his conversion to Catholicism. Reverdy’s early poetry will similarly be filled with haunted rooms.

Given these Christian underpinnings, which, however, are rarely blatantly visible in Reverdy’s writing, it is useful to keep in mind two quotations. One of them is aesthetic, the other spiritual in nature. It was notably Reverdy who best defined the telltale surrealist image as “a pure creation of the mind,” as he writes in an issue of Nord-Sud, the seminal review that he himself founded in 1917. He adds that the image “cannot arise from a comparison but rather from the coming together of two realities more or less distanced from each other. The more distant and precise the relations between these two juxtaposed realities, the greater the strength of the image—the greater its emotional force and poetic actuality.”

When Reverdy employs the word “reality,” he thus stands about as far as it is possible to stand from literary realism, from a close observation of the “world.” And this stance can be qualified by a second key remark. “Realize that I am less and less in a Catholic world, and more and more an anarchist and individualist,” he pointedly responds to derisive comments made by certain Surrealists about his conversion. “I am bound to nothing and to nobody. I feel less and less moved to make concessions to the world under the pretext of moving toward God. My conversion is an adventure from which I have not yet returned.”

It is in this sense that the poet’s search for God reflects a quest that is not merely spiritual but also literary. Purity, lightness, freedom—these are at once spiritual and poetic goals. Elsewhere, Reverdy defines his departure from Paris as a “need for the absolute. [. . .] being or nothingness. . .” He also remarks: “Here or there, everything is the same.” Accordingly, this quest for the absolute takes place inside the mind, as in his definition of surrealist imagery or as in the aforementioned “Backwards Forwards” piece in which the poet is “without ears.”

Reverdy’s poetic philosophy thereby entails the notion of ultimately withdrawing from language—to which one no longer listens—or of using words to get beyond language. This position implies a paradox, even a contradiction in terms, and it underlies the characteristic unresolved tension in his verse and prose poems. His writing can suggest a kind of mysticism without drawing on the trappings of mysticism. And yet for all its timelessness, his writing is not mysticism: it is poetry. But it is a poetry that is suspicious of the deceiving beauty of words, hence its pared-down, elemental, stylistic qualities. There is rarely any of the lavish rhetoric of some of the surrealists. This distillation (in the chemical sense), this linguistic purity (once again), foretells contemporary skepticism about the ends of writing.

Silence, too, is therefore a goal. “Somewhere,” a long poetic-prose piece that is rendered by Mark Polizzotti and that employs Christian symbolism, concludes with an aspiration for, or even faith in, silence: “But at the meeting of the four roads, the four limbs—when names are borne at the top of the cross—after the anxiety of the tightest, straitest passage, we always find an oasis of calm and repose in the whiteness of the expanse, the silence.”

In contrast, the ending of “Verso,” translated by Rosanna Warren, equates silence to the impossibility of finding anything to say:

Here, all the while evoking the Christian “other side,” Reverdy implicitly formulates—the poem dates back to 1922—a question that will haunt much of the most stimulating French literature written some thirty to fifty years later, in fact down to our present day: what is the role of literature when “there’s nothing left to say”? Why write? It is not surprising that his work remains so readable. It seems composed in such a way that it is always ahead of us.

Some fourteen translators, including Caws, have contributed to this anthology, sometimes with new versions, sometimes with versions already published in the past. Although a few quibbles can be made (a “talus” that becomes a “hill”, a present tense that becomes a past tense, an adjective infelicitously post-posed in English to make an enjambment when there is not one in French, a third-person anonymous French “on” that, in English, is asserted as an “I” although Reverdy in fact questions the foundations of the self), and despite a couple of misprints, the versions nearly always read well and are accurate. As a representative selection, it generously offers a good sampling of Reverdy’s prose poetry, which is as essential to his oeuvre as his verse. Interestingly, for the poem “False Portal or Portrait,” Caws prints one version by Kenneth Rexroth and two versions (made ten years apart) by Patricia Terry. (I vote for Terry’s second version.) For “Live Flesh,” we can compare a version by Rexroth to one by Frank O’Hara and another by Lydia Davis. (I vote for Davis.)

Yet serious doubts must be raised about the inclusion of Rexroth’s versions of thirteen of the poems. He was a pioneer in bringing Reverdy’s work into English (the New Directions Selected Poems of 1969), but his translations are frequently flawed. These flaws range from questionable interpretations of verbal temporality to downright misunderstandings of the original.

Of the many examples that can be cited, let me focus on “The World Before Me.” In Rexroth’s version of this long poem, there are several problems with definite and indefinite articles, as well as with verbal tenses, including the unseemly “I sit me down” for the standard passé composé “je me suis assis,” simply “I sat down.” Reverdy’s “Et l’on s’amuse” is an implied plural and not “Somebody is afraid.” And when in the same poem the poet writes “Une fenêtre s’ouvre sur ma tête / Il n’y a personne dedans,” the second line is imprecisely rendered as “Nobody home.” The poet means that no one is in the window, is framed in the window—a likely reference to God’s absence or, specifically, to the absence of God as a tangible person. Once again, the reality that counts is in the mind.