In her fabulous, intensely involving book, author Katie Roiphe crawls into the deathbeds of five writers who wrote brilliantly and prolifically.

The Violet Hour: Great Writers at the End by Katie Roiphe. The Dial Press, 320 pages, $28. 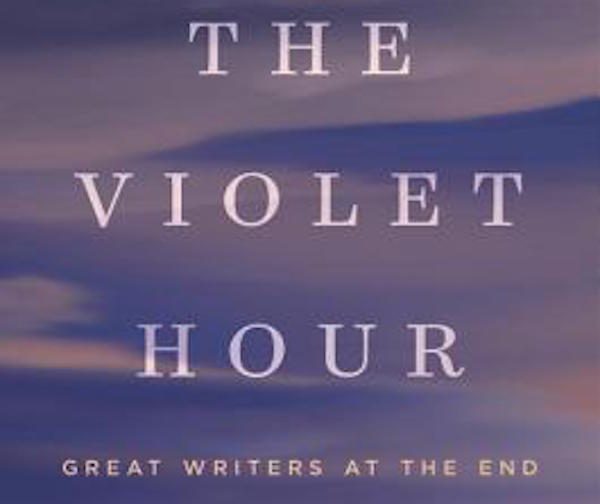 Because she could not stop for death, it cruelly came for Susan Sontag, who fought and kicked but ultimately succumbed to invasive cancer. “Do not go gentle into that good night,” declared Dylan Thomas, who went not gently but obliviously, shitfaced and in a coma after a night of lethal whiskey shots. John Updike, fatally ill at home with stage 4 lung cancer, wrote spare religious poetry in his last days, an intellectual who was also a Christian: “To live is good/but not to live-to be pulled down/with scarce a ripping sound/still flourishing/still/stretching toward the sun-/is good also.” When death came a-calling, Maurice Sendak, a non-believing Jew, had no such consolation. At 83, he’d described what comes next, Beckett-like, as “Blank, blank, blank.” And that was surely true for rationalist Sigmund Freud, when death tapped on his analyst door. As cancer spread, he refused to take painkillers so he could think clearly until he couldn’t. Freud liked to quote Bernard Shaw: “Don’t try to live forever. You will not succeed.”

No, you won’t! In her fabulous, intensely involving The Violet Hour: Great Writers at the End (The Dial Press, $28), author Katie Roiphe creeps back in time; she crawls into the deathbeds of the five above, who all wrote brilliantly and prolifically. A sixth, novelist James Salter, felt death’s sting a short time after Roiphe interviewed him live. “I chose writers who meant something to me,” explains Roiphe, “whose voices were already in my head, whose approach toward death was extreme in one direction or another: inspiring or bewildering or heroic or angry.” She picked those who she deemed “madly articulate,” and who “are especially sensitive and attuned to death, who have worked out the problem of death in their art, in their letters, in their love affairs, in their dreams.”

Why write this obsessive, morbid book? Roiphe says in her introduction that she’s been composing some version of it in her head since she was 12 years old, when she almost expired from pneumonia. Many weeks in a hospital, as her weight shrank to 60 pounds, she kept herself going by diving into “strange books”: Primo Levi and Elie Wiesel, and “firsthand accounts of the Armenian genocide.” Released to go home, she felt like a traumatized war victim. When young Katie published in a child’s literary magazine, her contribution was autobiographical and macabre, a tale of a girl fading away in a hospital bed, ending with a voice beckoning, “Come to me, daughter of the wind.”

Many years later, Roiphe is an esteemed essayist and novelist, and the director of NYU’s Reporting and Criticism program. But she’s still on her sepulchral voyage with The Violet Hour. She’s still insisting, “I want to see death.” Fortunately, her motivations for this book are not completely gruesome and weird. Roiphe declares: “I think if I can capture death on the page, I’ll repair or heal something. I’ll feel better. It’s as simple as that.”

Investigating her five deceased writers, Roiphe interviewed everyone she could find who was witness to their last months: spouses and ex-spouses, lovers current and past, nurses, maids, personal assistants. She read and reread everyone’s writings—novels, memoirs, essays, diaries, letters—to see what they said about death before they were actually dying.

She begins her book with Susan Sontag who, Roiphe contends, felt superior to death, considered dying a kind of personal insult. Assuredly self-important, she had so much to live for, to think about, and to contribute to our discourse. Twice before, Sontag had cancer. Both times, she’d fought it hard and licked it, and death slithered away. Why not a third victory?

Because the leukemia that ravaged her in 2004 made recovery impossible. Roiphe gives the doctors’ report: “[T]his particularily viral strain of blood cancer…[has]…no chance of remission or cure.”

In the 1970s, having whipped breast cancer, a cocky Sontag looked back on almost perishing as a worthwhile experience. “It added a fierce intensity to my life, and that’s been pleasurable,” she told The New York Times. “It’s fantastic knowing you are going to die.” In 2004, weary, older, wiser, she no longer thought dying was so incredible. Desperately sick, she willed herself to believe she would be cured. Those who knew the opposite — that this was it — kept if from her, including David Rieff, her son and confidant. He was tortured lying to his straight-talking mother. Rieff brought Tolstoy’s The Death of Ivan Ilyich to the hospital, and was heartened that Sontag wanted him to read the novella aloud. They spent days together entwined in literature’s most profound contemplation of the business of dying.

Rieff would recall that Sontag loved the part when Ilyich, more pain-ridden by the day, feels some relief putting his feet on the shoulders of his servant. As her own condition truly worsened, Sontag’s famous snobbism and arrogance slipped away. Her comfort came in talking, when she was able, to the humble hospital staff. Says Roiphe: “The nurses are warm, maternal, religious; they are with her in the middle of the night holding her hand.” Rieff believes that it was to her private nurses that his mom, so prideful, opened up finally about actually dying.

The pride of Sigmund Freud, in exile in London 1939 from the Nazis, was to face his immanent death from throat cancer with no illusions, no self-pity, and no regrets. When a therapist friend had died of cancer, Freud noted in a letter, “He bore his hopelessness with heroic clarity, did not disgrace analysis.” This stoicism was Freud’s credo, and he stayed true to it. In his last weeks, he closed down his therapy practice and dismissed his patients. He finished a novel by Balzac that he had been enjoying. With the assent of his daughter, Anna Freud, his longtime personal physician, Dr. Max Schur, administered three morphia shots. The end.

For John Updike, the shock of terminal cancer came at age 76. “Only a couple of months before,” says Roiphe,” he was healthy, vigorous, playing golf.” After viewing his fatal CAT scan, Updike tumbled into “an entirely reasonable black paralysis.” Yet quickly after, he bravely started to write a poem. Once home, his confidence ebbed. Could he still produce? His wife Martha answered, “Oh yes you can, John….One more book.” In his final months, Updike slowly managed a volume of poems. His WASP stiff-upperlipness matched Freud’s Austrian-Jewish stoicism. And like Sontag, he found himself rereading The Death of Ivan Ilyich. Also, The Book of Common Prayer. Updike passed away in his bed in 2009, his wife and several adult children present. Hours before, his Episcopal minister had led those gathered around the author’s dwindling body in reciting The Lord’s Prayer.

Roiphe compares Updike’s demise to that of his best-adored character, Rabbit: “He is nicely tired. He closes his eyes.”

Roiphe’s chapters on Sontag and Updike are melancholy and very moving. Her chapter on Dylan Thomas is the least affecting, even though the Welsh poet went out at age 39, ungodly early. That we care less is not Roiphe’s fault. Unlike her other writers, Thomas seemed to will his own death via his utterly reckless manner of living. He drank insanely as he toured the world again and again, tiring himself out, hardly sleeping, suffering blackouts and liver ailments, bedding down whatever wench would have him. In New York, 1953, his trail ended at the Chelsea Hotel, where the compulsively adulterous poet stayed with his latest mistress. Thomas had a night at his beloved Cedar Tavern chugging endless whiskeys before being taken later, in the middle of the night, unconscious to a hospital. Stunned friends and acquaintances were in the hospital halls when he gave up the ghost. Death has dominion.

Maurice Sendak’s dedication to writing gloomy, mordant stories for children was prompted by his own miserable Brooklyn childhood. His mother, who didn’t like him, told little Maurice that they had wanted to abort him, and that she had tried to fall off a ladder so that he could be miscarried. Curiously, Sendak didn’t resent being so exposed to such a revelation at a very fragile age. It informed his aesthetic view, that youngsters shouldn’t be sheltered from wild things, terrible things, including knowledge of the graveyard. He joked that he wanted “a yummy death…a happy death” like Blake. “It can be done. If you’re William Blake and totally crazy.” Sendak’s final moments were uneventful, even clichéd. Always a Jewish kvetch, he was said in his hospital bed to “have an expression of peace on his face.”

Finally, Roiphe got to novelist James Salter while he was alive and walking about, lucid at 89. “To tell you the truth, I don’t think much of death,” he told her. “I don’t try to imagine it.” Roiphe: “I am sorry to dredge up this depressing subject.” Salter: “This doesn’t depress me. …It isn’t depressing.” They talked through the afternoon. Salter was polite and interested in her anecdotes about the other writers. But he didn’t budge in disinterest about his own death. That came a few months later. This is Roiphe’s benediction for Salter, on the last page of The Violet Hour, her wonderful, emotionally demanding book: “He had a heart attack in the gym, a few days after his ninetieth birthday party. He celebrated …with a couple dozen of his friends. He had worn a white linen suit.”