Three new classical music albums: two are superior, one is a bit of a mixed bag. 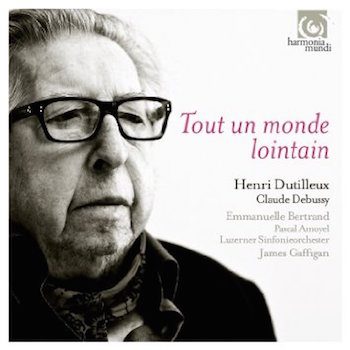 Though Henri Dutilleux isn’t around to celebrate his 100th birthday this January, he’s hardly been forgotten: music by the French master, who died at 97 in 2013, is this season the subject of numerous live performances around the world (including in Boston, where he had a special, long relationship with the Boston Symphony) as well as new recordings. One of the earliest entries in the latter category (released last November) is Emmanuelle Bertrand’s traversal of two Dutilleux works for cello paired with Debussy’s marvelous Cello Sonata on Harmonia mundi. If, as can be the case, Dutilleux’s blend of angular melodic writing; rich, chromatic harmony; and literary sensibility can cause one’s head to spin, this thoughtful, excellently-played pairing offers the opportunity to hear Dutilleux in some historical context as well as to gain a revealing take on that most fresh-sounding of 100-year-old sonatas.

In fact, so animated and enlivened is Bertrand’s take on the Sonata that it’s hard not to recommend this album on its merits alone. Throughout, Bertrand and her partner, pianist Pascal Amoyel, navigate the 1915 Sonata’s twists and turns with agility, charm, and a sharp focus on expressive nuance. Listen to the subtle differentiations between Bertrand’s pizzicato glissandi in the second movement for but one example of her keen attention to detail. The whole piece passes by with driving purpose, to be sure, but there’s also a wispy, apparitional quality to it that’s germane to Debussy’s enigmatic late style, particularly so in the finale, which balances a certain groundedness with moments of sweeping flight.

That approach also fits Dutilleux’s music well, especially his atmospheric Tout un monde lointain, which comprises the bulk of the disc. Bertrand proves a compelling advocate for the piece, a cello concerto in all but name, mining its poetry (the first movement, “Énigme,” sings with delicious, mysterious warmth) and acrobatics (she plays both the wild “Houles” and finale “Hymne” fearlessly) in equal measure. James Gaffigan and the Luzerner Sinfonieorchester provide a strong accompaniment of shimmering beauty, including some wonderfully glowing passages for percussion.

She also does justice to Dutilleux’s Trois Strophes pour le nom de Sacher, a set of three unaccompanied meditations for cello written to celebrate the new music patron Paul Sacher’s birthday in 1982. Her playing in each is fitful and concentrated, neatly capturing the martial quality of the first, the introspective lyricism of the second, and the fleeting playfulness of the finale. I can’t wait until Bertrand commits the Britten Suites to disc; until then, I suppose Trois Strophes (and the rest of this fine all-French album) will have to suffice. 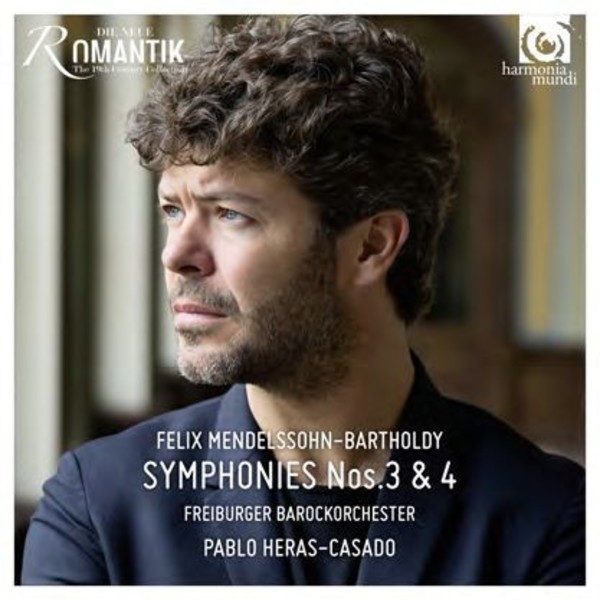 What positives are there to be found in Pablo Heras-Casado’s new recording of Mendelssohn’s Third and Fourth Symphonies on Harmonia mundi, a follow-up to his strong account of that same composer’s under-performed Second? Quite a few, in fact. Heras-Casado’s tempos are quick; articulations crisp; rhythms lively; and, especially in the finale of the “Scottish” and outer movements of the “Italian” symphonies, there’s a potent urgency to the playing.

And yet, despite these plusses, the cumulative effect of both performances is underwhelming. A big part of the problem, to these ears, owes to the fact that they’re played by the Freiburger Barockorchester and not a modern one. As a result, both symphonies lack an important degree of tonal heft, especially during exposed string melodies: listen, for instance, to how the violins fade prematurely throughout the opening theme of the “Italian’s” first movement or the excessive swells in (and tinny quality of) their sound in the “Scottish” Symphony’s flowing third movement.

It’s a pity, because, conceptually, Heras-Casado has some strong (in a good way) ideas about both works. While his “Scottish” Symphony is the better of the two, both are filled with rich dynamic contrasts and a vibrant sense of phrasing. In the former, the sadly noble evocation of the ruins at Holyrood with which it opens sings and the middle movements are, respectively, snappy and riven with pathos. He manages the transition into the finale’s coda with fire and irresistible energy. Like the “Scottish,” Heras-Casado’s “Italian” Symphony offers clean textures and moments of warmth (especially in the middle movements); the final tarantella packs a neat bite.

At the end of the day, there’s nothing fatally wrong with these performances but there are better-sounding and equally (or more) compelling readings on deck, notably Abbado’s classic account with the London Symphony from the mid-80s and John Eliot Gardiner’s with the Vienna Philharmonic from the late-90s (personally, I’m also partial to Bernstein’s live-wire account of the Fourth with the New York Philharmonic from the ‘60s and Solti’s take on the Third with the Chicago Symphony from the ‘80s). 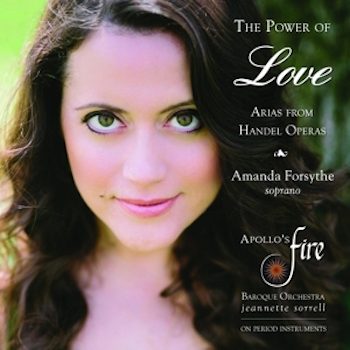 There’s not much about Amanda Forsythe’s new album, The Power of Love, a collection of arias from eight Handel operas and the ballet suite from Terpsichore, that, from the first downbeat, doesn’t impress. Forsythe sings this repertoire with such sure technique, dramatic understanding, and tasteful embellishment that it’s hard to escape the feeling that she simply owns this music. And so she does, at least for this album, which, from the opening “Amor è qual vento” (from Orlando) to the concluding “De Tempeste” (from Giulio Cesare), places her spectacular coloratura front and center.

It perhaps goes without saying that much of the glory of Handel’s vocal music lies in its special marriage of pyrotechnics and emotion. The best Handel singers – including locals (or one-time locals) like Lorraine Hunt Lieberson and Emily Marvosh – balance these qualities unforgettably. Forsythe does that, too, whether she’s evoking the anguish of “Geloso tormento” (from Almira), the whimsical knowing of “Un cenno leggiadretto” (from Serse), or the conflicted fury of “Dunque I lacci/Ah crudel” (from Rinaldo). Her singing throughout this disc is stylish, supple, tonally beautiful, and marked by eloquent diction. Jeannette Sorrell leads the Cleveland-based period ensemble Apollo’s Fire in accompaniments that strikingly match Forsythe in power, articulation, and expressive intensity.

Framing each of the sets of arias are four movements from Terpsichore, a series of dances originally designed to be interspersed into an opera. In this context, each – “Chaconne,” “Entrée,” “Air,” and “Ballo” – serve as a kind of a palate-cleanser and, overall, the concept fits the disc well. True, these movements come across a bit restrained compared to the often-fiery accompaniments the group provides Forsythe but that’s a small complaint for an album that, on the whole, is stupendous.