Tsvetanka Elenkova is one of the key figures in contemporary Bulgarian poetry. 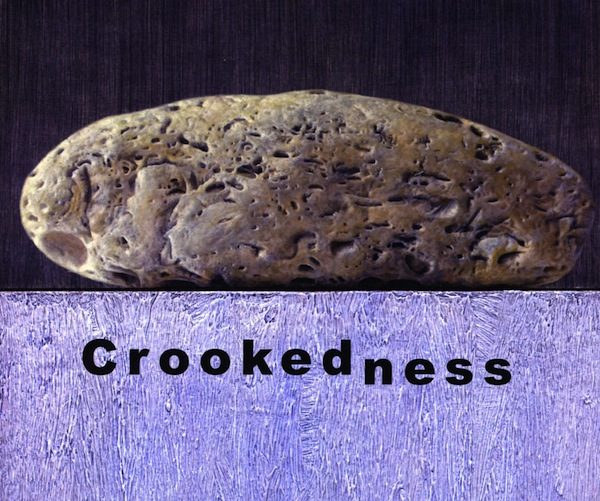 This gently engaging book of poems by Tsvetanka Elenkova (b. 1968) is likely to go unnoticed, and that would be a pity. Elenkova is one of the key figures in contemporary Bulgarian poetry and Crookedness, through her husband Jonathan Dunne’s crafted translation, reveals a poet who observes with affectionate attentiveness the particulars of nature, daily life and human behavior and who, at the same time, seeks to glimpse the spiritual horizons of these particulars. Her poems are about inhabiting the world thoughtfully and fathoming what aliveness can potentially reward us with, but the clearest indication of her metaphysical orientation is found in a three-liner not about life, but rather about death. Death, for her, is “a sting / after you have lost / your finger.” Like a Zen kōan, this paradox points to the imperceptible, to the invisible; the reader is encouraged to make such a poem his or her own, to test its enigma, to commune with this unreachable reality that suddenly becomes—or seems to become—tangible. Often her work suggests a bridge to what can be intuited.

This is not to say that Elenkova’s poetry is spiritual in any facile manner. Whereas the above poem is a haiku-like metaphysical aphorism and another piece in this collection is a mere three-word fragment about a pansy after a rainfall—“reflection is capture”—most of her poetry, although rarely long, constructs riddles more elaborately. Thoughts and perceptions are succinctly evoked; the transitions connecting them can be oblique; but an itinerary is nonetheless sketched. It is akin to thinking by association, yet the essence of the poem is not so much the final result as the resultant whole. In “Intersection,” it is the coming together of various disparate elements that is as important as the famous Russian Orthodox icon mentioned at the end:

Such associative itineraries reflect the cognitive leaps that have left the poet on the threshold of some kind of revelation—a retrospective revelation, as it were. The reader will often wish to reread in order to grasp the genuine importance of initial elements in the poem; that is, their relation to the other elements that follow. In the above poem, notably, one can meditate on the relationship between the opening maxim (“What remains accumulates / and therefore falls away”), which is also an image, and the “salt of the earth” and the “placenta from / Rublev’s Trinity” that appear at the end.

Moreover, Elenkova’s “lightning shifts between mind and sense,” as poet Tom Sleigh puts it in his perspicacious introduction, underlie the meaning of the mysterious title. Initially, Crookedness seems to indicate the deviancy of the world within which one can nonetheless acquire moments of illumination. Such, arguably, could be Elenkova’s hope or belief. Yet leaving these moral connotations of “crookedness” aside, one notes another possible interpretation. “Crooked” also denotes something that is not straightforward, that is curved (like a shepherd’s crook). These qualities can be deemed positive ones here. In other words, straight, clear-cut, rational paths cannot lead to genuine insight, to putative spiritual truths, let alone to any direct communion with a God; instead, one must remain alert to, have confidence in, the significant swerves that arise, as alternatives, in every moment’s journey. The poem “Directions” shows par excellence that directions are not easy to find, that the direction to be found is perhaps essentially, or at least initially, a state of directionlessness:

Most of the time, Elenkova’s poems are set within everyday existence and, sometimes, family life. Her poetry then departs from this realistic level and acquires symbolic consequence. “Hourglass” begins in the shade of an ordinary tree, mentions a simple tree house and a storm, but then passes on to a metaphorical storm and ends with an unexpected formulation of the ritualistic symbolism of a Christmas tree:

It is only at the very end that one looks back in order to comprehend the import of the simile “upturned conifer,” which qualified the broad-leaved tree at the beginning. The title, too, takes on resonance as it becomes, by association, an image. An hourglass can be upturned. All at once, in our surroundings, a common tree, the Christmas tree, and Time have become one.

In “This Is It,” Elenkova also brings together the physical and the symbolic in the lines “your hands have something in common / with the restraining gesture of icons” and by observing an “interweaving (of the ankles)” that forms an “open / eight,” the symbol of infinity. Such perceptions recall the Christian aspiration to plenitude. Many of Elenkova’s poems are like this: epiphanic wholenesses emerging from deviations and dissimilarities. Ultimately, her verse’s brief itineraries discreetly aim at a lasting light and a durable fullness.

John Taylor devotes a chapter to Elenkova’s earlier collection, The Seventh Gesture, in his collection of essays A Little Tour through European Poetry, recently issued by Transaction Publishers. He has translated numerous French poets, including Philippe Jaccottet, Jacques Dupin, Pierre-Albert Jourdan, and José-Flore Tappy. His most recent personal books are The Apocalypse Tapestries (Xenos Books) and If Night is Falling (Bitter Oleander Press), a collection of short prose.