Lila is an ambitious book that is deeply flawed and not nearly in the same class as Marilynne Robinson’s Pulitzer Prize-winning novel Gilead. 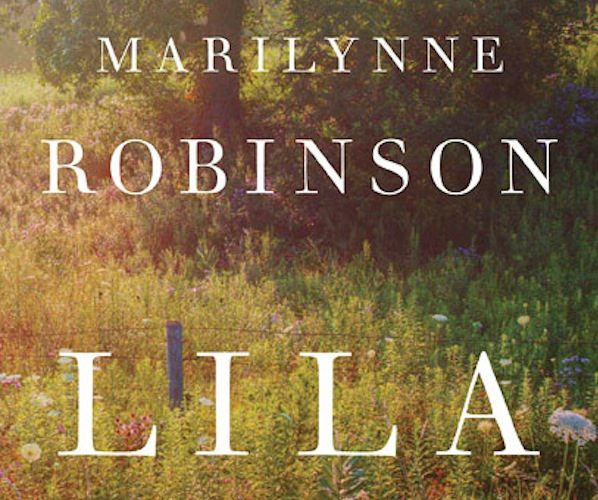 I guess it is only fair to begin way back in the early 1980s. Although everyone I knew was raving about Marilynne Robinson’s debut novel Housekeeping and although an English friend was the film editor of the subsequent movie, I have always felt like odd man out regarding that highly touted book. For me there were no tingles in it, I felt it was contrived, and the language did not blow me away. This was no Flannery O’Connor, or Elizabeth Bowen. Indeed, I found the experience of reading Housekeeping somewhat like eating a too-rich Thanksgiving stuffing.

I missed Home when it appeared after a long hiatus, but was interested in Gilead and, having just re-read it, I agree that it deserved the Pulitzer Prize. It has a real voice and sweep, reminding me of one of my favorite writers, Willa Cather, and the first person narrator, John Ames, who at seventy-seven in 1956 is writing a long, novel length letter to his seven-year-old son, is entirely believable and affecting. Like his grandfather, an abolitionist who came to preach anti-slavery in the west and landed in a small town in Iowa, Ames is a preacher, and has a profound understanding of both the Old and New Testaments; his eloquence has a biblical ring; the story has historical reverberations that go back to the Civil War; and the language is beautiful, direct, tender, and filled with humility and humor.

So I turned to Lila with great anticipation. This a “prequel” to Gilead, the story of the young wife who came into John Ames’s life when he was sixty-seven and the mother of his child. And once again, I seem to be in the minority. In the last twenty-four hours I see that Lila has been nominated for the National Book award, and I have read Michiko Kakutani’s review in The New York Times — not exactly a rave, but respectful — and also Leslie Jamison’s and Joan Acocella’s highly laudatory reviews in the current Atlantic and New Yorker.

But for me Lila is an ambitious book that is deeply flawed and not nearly in the same class as the earlier work, Gilead. First of all, Robinson has written it in the third person, so this strange woman, who was abandoned as a young child and rescued by a woman named Doll, seems, for most of the book, to be a helpless, often dour victim who is observed at a distance. If she were telling her own story, we might have felt more intimacy with her, and while we respect her loyalty to Doll, the older woman never really becomes “round” enough, in Forster’s terms. And second, the structure of the book is confusing and lacks any kind of real narrative drive. Most of the novel takes place when Lila is already married and pregnant, and all else is revealed as memory, sometimes in conversations, sometimes in thought. So while there are some nice scenes, this is by no means a great novel. It isn’t even a really good novel because, Robinson’s language fails her when her story falters. And since Lila’s story is broken up into little bits and pieces of thought and odd flashbacks, the prose never achieves the beauty nor breadth of Gilead.

Moreover, Lila’s early life with Doll and the other street people becomes unbelievably repetitious, which is a shame, because in the last third when Lila is on her own and ends up in a whorehouse in St. Louis, she becomes a lot more interesting. You understand why she is so disillusioned, and the conversation she has with Ames soon after they get to know each other, makes more sense. Here they are after she has wandered into his church and they are getting to know each other and she is discouraged and thinking about hitting the road again:

She said, “I guess I’m tired.”
Yes, well—” and he put his arms around her, very carefully, very gently.
With her head still resting on his shoulder she said, “I just can’t trust you at all.” He laughed, a soft sound at her ear, a breath. She started to pull away, but he put his hand on her hair so she rested her head again.
He said, “Is there anything I can do about that?”
And she said, “Nothing I can think of. I don’t trust nobody.”
He said, “No wonder you’re tired.”

After they marry, at her suggestion, you see them struggling to adjust to their new state, but as soon as you get interested in these two very oddly matched people, he always afraid she might leave, and she learning to speak and read better by copying passages of the Old Testament (first Ezekiel and then Job), Robinson throws in more of the past and we are back in Lila’s fevered memory, going over the travails of her and Doll, which are reminiscent of Steinbeck’s Grapes of Wrath, but with none of the patience and poetry of that great book.

And although Lila asks important questions about what matters in life and although by the end of the book Lila has changed in unexpected ways, she is always a victim, the pull of the past exerting itself on her and threatening to overwhelm her. In a sense, it is the vividness of childhood, even a childhood filled with poverty and a deep loneliness, that wins out. But the way Robinson tells it, you see her struggling to lift what could have been a very good novel into the realm of myth, especially when she keeps coming back to the water imagery and the metaphor of baptism. And at times I felt that Robinson was stubbornly undercutting the narrative in her insistence on proffering a vision of life that is more damned than redeemed. It may be her Protestant bias, but for this reader, it doesn’t quite work. Here is Lila at the end:

Oh, if the old man knew what thoughts she had! She could make a pretty good meat loaf now and a decent potato salad. He told her he never liked pie very much anyway. She could keep the house nice enough. People passing in the road stopped to admire her gardens. The boy was as clean and pretty as any baby in Gilead. A little small, but that would change. And the old man did look as though every blessing he had forgotten to hope for had descended on him all at once, for the time being.

She couldn’t lean her whole weight on any of this when she knew she would have to live on after it. She wouldn’t even want to see this house again after they had left it, or Gilead, at least till the boy had outgrown the thought that they belonged there. So she thought about the old life. She never really hated it until Doll came to her all bloody and she went to St. Louis. But it was a hard way to bring up a child. And she would tell him he was a minister’s son, so he might blame her because she couldn’t give him what his father would have given him, the quiet gentleness in his manners, the way of expecting that people would look up to him. She surely couldn’t teach him that. . . . So one morning, standing at the sink washing the dishes, she said, “I guess there’s something the matter with me, old man. I can’t love you as much as I love you. I can’t feel as happy as I am.”

It it not up to any critic to tell a writer how they should have written a novel, but as I read, I found myself longing for Robinson to tell the story in a simpler way, perhaps more chronologically, and certainly in a way that trusted itself enough not to jump around so much, perhaps framed by the present story — the waiting for the child. With less pretension and groping for a “deeper meaning.” Or, it may be that I was longing for a more courageous editor. And therein lies part of the problem. Based on a small amount of fiction, Robinson has achieved a huge reputation and my guess is she is rarely questioned or criticized by her first readers. How very sad. When I closed this sometimes poignant book, I could only feel regret that it isn’t better than it is.