You are here: Home / Books / Book Review: “The Witch-Hunt Narrative” — An Ambitious and Disturbing Study of Injustice

The Witch-Hunt Narrative is an extremely important book about an ongoing phenomenon that will not go away anytime soon. 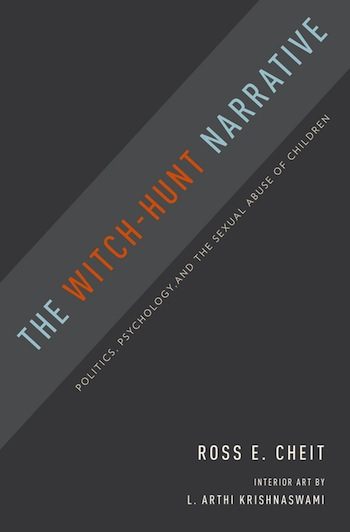 In 1995, Ross Cheit, a professor of political science at Brown University was asked to review Satan’s Silence – Ritual Abuse and the Making of a Modern American Witch Hunt, a book about the McMartin child sexual abuse trials and their legacy. The McMartin case had begun more than a decade earlier, when a mother in southern California reported to police that her son had been sexually molested at the McMartin Preschool by a worker named Ray Buckey. He and six others, including his mother and sister, were indicted and jailed. Seven years, fifteen million dollars, and hundreds of media reports later, all were judged to be innocent, but their lives were ruined.

The McMartin Case left a very complicated legacy that involved two real injustices: the sexual abuse of children and jailing of innocent adults. McMartin was followed by similar cases across the United States. In some, the sexual abuse of children by their caretakers was overshadowed by allegations of satanic cult practices, sometimes used as a distracting tactic for the defense. Other issues that became more publicized than what had actually happened include the reliability of children’s testimony; the way police, detectives, and medical personnel interviewed the children; and the influence of the media.

The real victims in McMartin and the cases that followed, the authors of Satan’s Silence – Ritual Abuse and the Making of a Modern American Witch Hunt claimed, were the falsely-accused adults. In its approving pre-review, Publisher’s Weekly had written that the authors: “trace how… social workers supplanted police as investigators, and how changes in family and gender relations (including victimology feminism [sic]) fueled social preoccupation with demonology… Reproducing case transcripts, the authors show how children’s testimony was led; nevertheless, civil libertarians shied away from challenging such cases: demonization of child sexual abuse as society’s ultimate evil has rendered it so holy as to be virtually immune to reasoned analysis.”

Kirkus, too, was positive about the book, calling it “a pull-no-punches expose of the forces behind a nationwide wave of false charges of ritual child abuse….(and) a compelling and disturbing picture of an America in which seemingly responsible and respectable individuals, organizations, and institutions were caught up in an appalling hysteria that sent many innocent people to prison while civil libertarians and political progressives were shamefully silent.”

A political scientist with a law degree and a doctorate in public policy, Professor Cheit was unwilling to equate the McMartin and other sex abuse of children trials with the Salem witch trials of the seventeenth century and the McCarthyism of the 1950s. He was also disturbed that the narrative of wronged adults had displaced and even eclipsed the narrative of the wronged children. Cheit had more than an academic interest in the subject. He himself had been sexually abused — not as a child in a southern California daycare center, but as a teenager at a northern California summer camp. In 1994, a year before Satan’s Silence was published, he had won a civil suit against the San Francisco Boys Chorus and William Farmer, the former counselor at the SFBC camp who had abused him. Farmer had apologized and tape-recorded an admission of abuse.

Instead of writing a review of Satan’s Silence, Cheit decided to research some of the alleged adult victims of the hysteria whose names appeared on the dedication page. Since their cases had been tried all over the United States and almost none of the transcripts were computerized, he chose to begin close to Providence, Rhode Island, with the dedicatee Robert Halsey, who was tried in Berkshire County, Massachusetts. Cheit and a student reviewed the primary documents, most importantly, the trial transcript: Halsey had been judged and found guilty by jury as well as by all appellate judicial panels since then. His case clearly did not support “the witch-hunt narrative.” Cheit wrote up his finding in “The Legend of Robert Halsey,” published in the Journal of Child Sexual Abuse in 2001. Then he decided to enlist more students and research 36 more cases.

“I came to call this work Extreme Research and I did it for almost 15 years,” Cheit writes in his preface to The Witch-Hunt Narrative. Over that time, he employed more than eighty research assistants and spent a small fortune on photocopying and the transcribing services of court stenographers.

The result is really several books in one: a heavily researched, detailed study that reads far longer than its 407 pages of small print plus footnotes. Cheit divides it into three sections: the rise of the witch-hunt narrative; the triumph of the witch-hunt narrative; and recent developments. He supplies meticulous charts and illustrations for reference. But The Witch-Hunt Narrative is so ambitious and its scope so vast that this reader retained no organizational strategy on the author’s part. Instead, I thought that turning this amount of material into a readable book would test the powers of a great 19th century novelist.

At the core of this book and at the core the witch-hunt narrative are what Cheit calls the “foundational cases in the public discourse about child sexual abuse and about children as witnesses. They have also become an integral part of academic discourse about the suggestibility of children. Much of the discourse is premised on the assumption that these cases did not involve any credible evidence of sexual abuse.” They are: McMartin in California; Kelly Michaels in New Jersey; and Country Walk Daycare in Florida (also known as the Frank Fuster Case). Each was widely covered by the press and has a cast of plaintiffs, their families, defendants, lawyers, judges, experts and the journalists who covered them. In each, he writes, prosecutors had good reason to investigate and bring charges. None, in Cheit’s view, qualify as “witch-hunts.”

In his conclusion to his discussion of McMartin, Cheit writes:

The McMartin case was doubly unjust. First, it was unjust to the defendents who were charged without sufficient evidence or adequate investigation. Several were held without bail for an extended period of time….There was an unfathomable personal and financial toll to these people, who were falsely accused in an environment where they were publicly castigated before they were even charged with anything. For most of the defendants, the case was a monumental injustice.

But the case was also unjust to children. Some were brutalized by the judicial process, particularly in the preliminary hearing. Although that was widely recognized when it occurred in 1985, it was long since forgotten by the end of the McMartin case in January 1990. There were also children who had been sexually abused but who never received justice and instead have been demeaned by the witch-hunt’s assertion that the entire case was a ‘hoax.’

Cheit tries, in exhaustive detail, to restore the complexity and confusion but, in pursuing this mission, he often succeeds in confusing his reader. In addition to examining McMartin and two other “high publicity” cases, he summarizes many more where the record shows substantial evidence of abuse and compelling reasons that jurors voted to convict. Cheit examines the primary documents and acknowledges that while some adults were charged who shouldn’t have been, there is evidence that children had been sexually abused.

As if all this wasn’t enough material to organize into a narrative, Cheit takes on questions from the fields of medicine, sociology, history, psychology, and cultural studies. Some are: how does the American justice system’s presumption of innocence until guilt is proven “beyond a reasonable doubt” square with the abuse of children? How has feminism contributed to an anxiety, if not hysteria, about childcare? Why, after the Penn State and Church sexual abuse scandals, does society prefer to discount the plaintiff and defend the accused? How can children testfy and be treated fairly by the judicial system when they typically have to tell their story not only to parents but to a series of strangers?

Cheit also has a lot to say about the irresponsible role of the media. He identifies the outlets responsible for disseminating the witch-hunt narrative and critiques print, broadcast and internet outlets for their role in exploiting it. He names journalists who wrote for Harper’s Magazine, the San Diego Union-Tribune, the Wall St. Journal, the Memphis Commercial Appeal, the Village Voice, the New Yorker, and TV’s Frontline as well as movies such as Indictment produced by Oliver Stone and the documentary Capturing the Friedmans.

Cheit aims to be inclusive and thorough in his presentation of the evidence and succeeds at the cost of being readable. As I tried to follow the argument of The Witch-hunt Narrative, I kept losing sight of the forest for the trees. The scholar has been researching this field for so long and has so much to say about every aspect of his subject that he goes off on long tangents and writes rebuttals to contentions the reader may or may not even be aware of. While I found some of these insider arguments interesting, I also found them disruptive and confusing. There are just too many names, places, accusations and trials to keep straight, and too many stories to follow.

The Witch-Hunt Narrative is an extremely important book about an ongoing phenomenon that will not go away anytime soon. It brings together documents hard to find elsewhere and raises many important questions – not only for the many professions dealing directly with them, but for all of us interested in justice and injustice – for adults and children. I was sorry that Cheit was unable to fashion a better organized, more tightly written book. Like so many volumes that have come across my desk recently, it needed a few more drafts to eliminate the many repetitions, set up the sections better, introduce the dramatis personae better, select the most important details and be ruthless about relegating the rest to footnotes.

It needed a strong editor committed to fashioning what could have been a book for the general reader and, sadly, will serve largely as a resource for professionals instead.

Helen Epstein is the author of six books of non-fiction, including Children of the Holocaust; Where She Came From: A Daughter’s Search for her Mother’s History; a collection of profiles of musicians; and a biography of Joe Papp. All are published as ebooks by Plunkett Lake Press.