You are here: Home / Books / Book Review: “Our Lady of the Nile” — Prefiguring Rwandan Genocide

Because of the national tension between the Tutsis and the Hutus, and its effects on everyday routines in the school, this novel cannot long remain a bemusing tale of adolescent life.

Our Lady of the Nile, by Scholastique Mukasonga, translated from the French by Melanie Mauthner, Archipelago Books, 244 pp. $18. 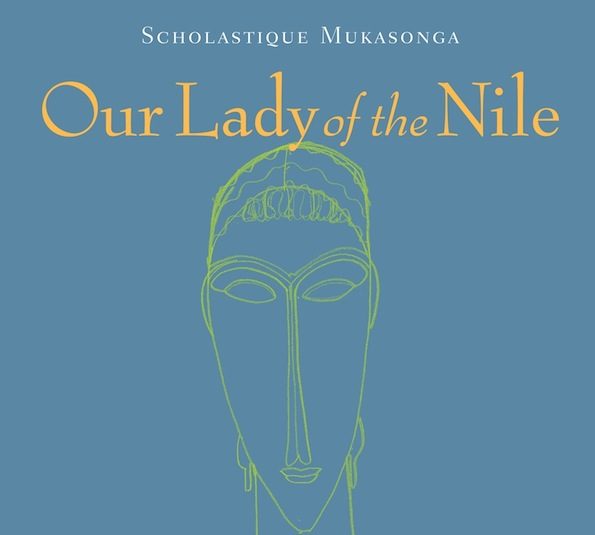 Scholastique Mukasonga’s novel Our Lady of the Nile opens calmly enough with gently ironic stories and descriptive passages about the daily life in a Catholic girls’ high school in Rwanda, some fifteen years before the genocide of 1994 (when between eight-hundred thousand and a million Tutsis and moderate Hutus were massacred by Hutu extremists during a hundred-day period).

First published in 2012 — when it won three French literary prizes — and now fluidly translated by Melanie Mauthner, the book is set in a devout boarding school that has been established for the daughters of well-to-do and politically influential families, especially Hutus who have recently come into power and carried out their “social revolution.”

Located above the town of Nyaminombe, the school is perched some 2500 meters up a slope in the Ikibira Mountains, near the source of the Nile. And the name of the school results from the homonymous statue of the Virgin, closely resembling Our Lady of Lourdes and rather puzzlingly painted black, which has been erected nearby. The old cook at the school, Sister Kizito, remembers how she discovered, at the unveiling of the statue, that “Our Lady of the Nile was black: her face was black, her hands were black, her feet were black. Our Lady of the Nile was a black woman, an African woman, a Rwandan woman — and indeed, why not?” The country became independent in 1962.

Mukasonga, a Tutsi writer who was born in the Gikongoro province of Rwanda in 1956, weaves an increasingly tense plot out of this subject matter, which surely draws on her personal experiences. Her first three books, Inyenzi ou les cafards (2006), La femme aux pieds nus (2008) — a tribute to her mother, who was murdered during the genocide along with twenty-six other family members — and L’Iguifou (2010), are autobiographical narratives.

In this, her first full-fledged novel, universal themes of adolescent school life initially emerge through the portraits of engaging or, in a few instances, ever more disturbing characters: Immaculée, with her skintight trousers and plunging neckline, who is driven up the rough mountain track to school by her boyfriend on what might be the biggest motorbike in the country; a new teacher named Olivier Lapointe who is a Frenchman with long hippie-like hair that scandalizes the moral values of the nuns; Sister Lydwine, the geography teacher who ever specifies that the school is actually located at an elevation of 2493 meters; and Father Herménégilde, the school chaplain, who turns out to have prurient interests in the girls.

First and foremost among the other distinct characters are Virginia and Veronica, who are Tutsis, and Gloriosa, a Hutu who steps out of a black Mercedes with tinted windows on the first day of school because of her father’s new political clout. There is also Gloriosa’s friend Modesta, who is half-Hutu, half-Tutsi. As the various sketches, evocations, and mini-narratives gradually channel into a single relentless plot, Gloriosa stands out as Virginia and Veronica’s malevolent protagonist.

Because of the national tension between the Tutsis and the Hutus, and its effects on everyday routines in the school, this novel cannot long remain a bemusing tale of adolescent life. In fact, Gloriosa’s evil intentions with respect to her Tutsi fellow students are mentioned at the onset, but the reader might have skimmed over them while perusing finely detailed passages about first menstrual periods, sexual awakening (or promiscuousness), the persistence of certain ancestral beliefs, the role of money in procuring help, the smuggling of various delicacies into the dormitory, and the eternal adolescent quest for more personal freedom. One girl, Frida, becomes pregnant, while Veronica gets involved with a mad white artist, Monsieur de Fontenaille, who lives in the environs. He drugs her and paints her without her knowledge, but she eventually accepts to pose regularly for him as a model for his paintings of Isis and other ancestral figures related to his personal vision of the Tutsis. He promises to send her to Europe to pursue her schooling.

Here and there, Mukasonga outlines a bit too pedagogically the background behind the Hutu-Tutsi rivalry. Perhaps some of the information could have been blended into less schematic dialogues or asides. But this is a minor criticism. She creates a narrative movement that reflects how the Tutsis, at the time, must have experienced the growing threats of certain Hutus. At first, there is an illusion of relative comfort. The new school year begins, routines start all over again as they always do. That is, Mukasonga gives us the impression that Our Lady of the Nile will be a story about adolescent girls in a Catholic boarding school, with the kind of mishaps, adventures, and aspirations that such stories have. But gradually the skies darken, announcing the treacherous, suspenseful ending.

How do people from different ethnic groups, who get along with each other more or less in a given place, come to hate each other to the extent of wanting to commit murder? Literature stemming from the Yugloslav Wars (1991-1995), which took place at the same time as the Rwandan Civil War (beginning in 1990) and subsequent genocide of 1994, often suggests that it is politicians and religious leaders who incite groups to hate other groups and to take brutal action. The eyewitness observations of such writers often conclude that individuals can establish a peaceful modus vivendi with most other individuals, but once undue importance is given to group identity, potential trouble lurks.

This lesson is also true of Mukasonga’s novel, at least partly. Gloriosa instigates and organizes violence. Without her presence in the school, life might have flowed more smoothly — at least for a while. After lying about the damage, which has been discovered, done to the Our Lady of the Nile statue, she persuades her Hutu fellow students (and some of the school authorities, including the especially devious chaplain) to turn against the Tutsis, in particular against Veronica and Virginia. She also summons the Hutu roughnecks of the Militant Rwandan Youth organization to come up to the school and do their dirty work.

Historians and political essayists have analyzed the political turmoil immediately preceding the first massacres of 1994: the aforementioned Rwandan Civil War, which pitted the Hutu-dominated government against the mostly Tutu-led Rwandan Patriotic Front; and then the shooting down, on April 6, 1994, of the airplane carrying the Rwandan president Juvénal Habyariman, an event that sparked the onset of the mass slaughtering of Tutus the very next day.

Mukasonga’s novel is set a decade and a half before these events. She thus gives weight to earlier signs of rivalry and strain, to say the least, between the two ethnic groups. She points to the mythical, Biblical, and colonial reasons, and thus misunderstandings, that underlie the Hutu belief that the Tutsis are over-privileged “foreigners,” not “Rwandans.” In this well-constructed novel, the grim final scenes prefigure the horrors to come.

John Taylor is the author of the three-volume Paths to Contemporary French Literature (Transaction Publishers, 2004, 2007, 2011). He has translated several French poets, including Philippe Jaccottet, Jacques Dupin, Pierre-Albert Jourdan, Louis Calaferte, and José-Flore Tappy. His most recent collection of short prose is If Night is Falling (Bitter Oleander Press, 2012).