You are here: Home / Books / Book Review: “Before I Burn” — A True Crime Story Transformed into Art

“Before I Burn” gives the reader the awesome sense of a fully perceived life—the hallmark of great art.

Before I Burn, by Gaute Heivoll. Translated from the Norwegian by Don Bartlett. Graywolf Press, 336 pages, $26. 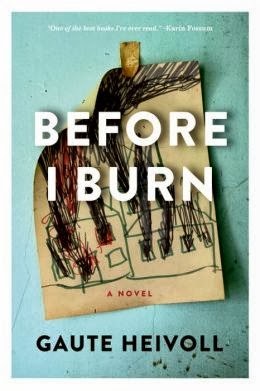 For one month in the early summer of 1978, the southern Norwegian village of Finsland was at war. The enemy was not a foreign invader or an unruly internal faction. Rather, an arsonist’s string of house fires held the citizens of this village in a state of unnerved vigilance:

The bottom line was that you kept watch. No one had the remotest idea who the arsonist was. Or who might suddenly emerge from the darkness. Nothing like this had been experienced since the war. Indeed, during those weeks there was an atmosphere in the region that was reminiscent of war. Even those who were too young to have lived through the war also thought about it in those terms. That is what everyone has told me. War had returned.

In his novel Before I Burn, Gaute Heivoll carefully explores Finsland’s war with a homegrown pyromaniac. Through coolly expressive prose (perceptively translated by Don Bartlett) and attentiveness to details, he demonstrates his mastery of the true crime form. But this label falls short of adequately describing Before I Burn, thanks to Heivoll’s mastery of weaving together a complex and intricately layered narrative.

Gaute Heivoll, it should be pointed out, is the name of both the author and the first-person narrator of this story. This metafictional apparatus effectively blurs the line between fact and fiction, so that liberties can be taken with the real life events that inspired the book. This move will be jarring to fans of true crime stories, who often take great pleasure in carrying on their own research of the events depicted in the books. Heivoll’s intentional vagueness about what is invented and what actually happened is a check on the conventional approach. His is a story that demands to be read on its own terms, and on those terms alone.

Heivoll, the narrator, was born in Finsland in March of 1978 and christened just days before the arsonist was caught. Brought up in the wake of these fires, he strongly feels that they are a formative influence over his life. Years after he had left Finsland and established himself as a successful writer, Heivoll returns to his hometown to research the arsons for a new book, assuming there is more to the story than what his childhood recollections provide. But as is so often the case, a homecoming generates inward as well as outward examination. Heivoll revisits his personal development as a writer at the same time that he reevaluates the fires:

Every now and then I have the feeling that I am living two parallel lives. One is secure, simple, a life without so many words. The other is apparently real life, with me in the middle of it, at my desk writing every day. The first life can disappear for lengthy periods, but makes an occasional appearance, it is as though I am suddenly close to stepping inside it, I am on the verge and I have a sense that at any moment I will catch sight of the person who perhaps really is me.

Heivoll’s recollection of his early adulthood in the late ’90s, which saw him shirk law school in order to explore the “darker side of life” as a writer, at first serves as a splendid counterpoint to his account of the 1978 fires. The novel’s achievement rests in its synthesis of these two seemingly disparate storylines into a cohesive whole. Heivoll accomplished this through his study of another young man, Dag, who also leans toward the “darker side of life.” Dag’s passion is not writing, though he also yearns to bring excitement and meaning into his prosaic life. For the son of Finsland’s fire chief, the string of fires in 1978 seems to accomplish this stimulation for him. But where, Dag’s mother wonders, is her son driving off to in the middle of the night? And why does he always smell of smoke when he returns?

The gradual unveiling of the arsonist’s identity provides the pay-off that crime fiction readers yearn for, but it is not the novel’s primary dramatic goal. What makes Before I Burn so compelling is Heivoll’s masterful fusion of three narratives that are artfully interwoven as the story progresses. The revelations in one storyline elucidate the events in the others, exponentially heightening the tragic power of the novel as a whole.

“You gather all the fragments, even ash,” Heivoll writes, not in order to ascertain the truth, but because you simply have no other choice. The hope is that examining fragmentary evidence generates a deeper understanding of what initially seemed satisfactory, if one-dimensional. Since this novel brings its readers so tantalizingly close to the process of its own creation, readers are asked to gather the fragments as well. Before I Burn combines seemingly disparate narrative elements: the birth of an artist, a psychological study of a criminal mind, an affectionate examination of one’s own upbringing. Collectively, these ‘fragments’ look as if they would make an awkward fit, but when imaginatively fused they give the reader the awesome sense of a fully perceived life—the hallmark of great art. In this way, Heivoll’s remarks on a fantastical story recounted in the introduction to Before I Burn seem an apt summation of his own tale: “I don’t know if this story is true. However, it is something you can understand. If you sit down and reflect, you do slowly understand.”