You are here: Home / Featured / Rock Review: The Ego and the Ecstasy of Deerhunter’s “Monomania”

Dramatizing the essence of punk was Bradford Cox’s chief goal while composing Monomania, which he describes as a “very avant-garde rock & roll record.” 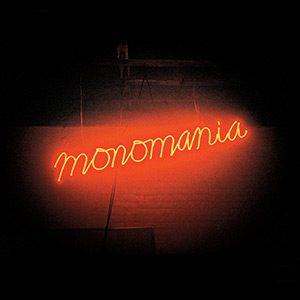 On April 2nd, indie rock band Deerhunter graced the stage of TV’s Late Night with Jimmy Fallon performing a particularly noisy rendition of the title track of their new album, Monomania. The performance was laden with overdriven garage rock riffs and snarled vocals from frontman Bradford Cox. It closed with an outro of screeching guitars and harsh feedback during which Cox stormed off stage to wait for the elevator. When the head of Deerhunter’s label attempted to pay the band a compliment by calling the show “great,” Cox retorted, “I don’t care if it was great! Was it punk?”

Dramatizing the essence of punk was Bradford Cox’s chief goal while composing Monomania, which he describes as a “very avant-garde rock & roll record.” The music is determined to be reckless and blunt, whereas the band’s past material would best be characterized as proffering carefully-crafted, shoegazy textures. The band hasn’t sounded this abrasive since its tumultuous debut, Turn It up Faggot, an album Cox has come to abhor and has all but disowned.

However, Monomania is not simply a belated follow-up to Turn It up Faggot. Yes, this new album is, at times, just as cluttered and raw as the latter disc, but it is more refined sonically and thematically and the result is far more rewarding for the discerning listener.

“Neon Junkyard” opens the album with some sluggish, twangy guitar plucks and reverbed vocalizations from Cox. After a few seconds, a plodding garage rock groove kicks in, and Cox begins to sing in his customarily flamboyant, occasionally gnarled voice. As always, his lyrics are abstract, often sounding as if they are off-the-cuff effusions. The opening line, “Finding the fluorescence in the junk,” is essentially the album’s thesis. The irony is that, though there are moments of beauty to be found on this album, the rawness of the instrumentation and the despairing lyrics might make it hard to notice them.

“Leather Jacket II” is the most chaotic track of the bunch. Its screeching, swirling guitars render Cox’s already distorted vocals pretty well incomprehensible. However, this song gives way to the beautifully subdued sound of “The Missing,” which features a clean guitar tone, a gleaming synth texture, and tender vocals from multi-instrumentalist Lockett Pundt. This tune serves as a transition to the next handful of tracks, which also explore less abrasive territory.

“Pensacola” is a send-up of country music, revolving around a “dirtbag” narrative about coming home to find your woman with another man. It’s a broad piece of satire: Cox’s sexuality is ambiguous, though he claims to lead an asexual lifestyle. While Cox’s commentary on the sexual melodrama is somewhat amusing, the song’s self-conscious kitsch makes it a stomach-churning listening experience. Thankfully, “Dream Captain” marks a return to the band’s distinctive garage-rock grooves. The latter and “Blue Agent” are both characterized by muted guitar picking, although “Dream Captain” comes across as more memorable given its howled chorus, “I’m a poor boy from a poor family/There’s nobody left to take care of me!”

The following two songs, “T.H.M.” and “Sleepwalking,” sound as though they could have been written by The Strokes—if The Strokes dealt with the ambitious themes that Cox does, that is. In “T.H.M.” Cox recounts his younger brother’s suicide over some very somber sounds of a garage-rock instrumentation. On “Sleepwalking,” Cox confesses that, while he feels a duty to provide lonely people some solace through his music, he wants to write songs free of any sense of responsibility. The tune’s complex lyricism, nuanced sentiment, and bouncy instrumentation make this track a highlight.

“Back to the Middle” is a breezy yet angsty song about how Cox has been left bitter and broken by someone he loved. This leads to the title track, which skillfully matches the abrasive punk attitude of the album’s first two songs. Cox expresses his overpowering desire to be loved and to ruminate aplenty on his personality, repeatedly yelling “mono-monomania” over the dizzyingly noisy outro that the band impressively managed to recreate for the Late Night performance.

The overwhelming feedback at the end of the title track cuts out to reveal the revving of a motorcycle engine, which segues into the curious track “Nitebike.” The song features only Cox’s echoing acoustic guitar and voice, but, given the way the singer recklessly throws his voice about, it still manages to be thoroughly punk. “Nitebike” provides the most tenderly melancholic moments on the album, with Cox alternating between sounding resolutely anarchistic and completely vulnerable.

The album closes with “Punk (La Vie Antérieure),” which turns out not to be the distorted, fast-paced song its title would suggest. Rather, it sees Cox on his acoustic guitar again—this time accompanied by his bandmates. Cox recalls his younger days, when he led an irresponsible, delinquent lifestyle. Even though he’s now moved past his earlier reckless behavior, he can’t shake the outsider image.

In the closing track, Cox explores the love-hate relationship he has with his bad boy image. When he takes on the role of the uninhibited and alienating rebel, he finds life to be interesting but painful. When he embraces stability and welcomes the acceptance and respect of others, he finds life to be a bore. Monomania illuminates both halves of this ambivalence with more artful power than in any past Deerhunter effort. Cox appears to have gained some closure from making an album that plays with the paradox of punk—so controlled and yet so uninhibited.