You are here: Home / Books / Film Commentary: “The Hobbit” in Print and in Film — A Quick Guide on How to Put the “Faux” in Folklore

Director Peter Jackson in his film adaptation of The Hobbit abandons the intimate scale of the original wonder tale and mistakenly blows it up into mythic proportions. 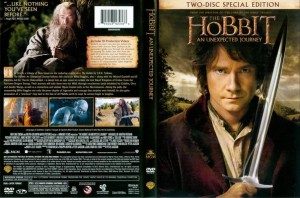 I spied the first part of Sir Peter Jackson’s tripartite adaptation of J. R. R. Tolkien’s The Hobbit (curiously re-subtitled “An Unexpected Journey” as opposed to the original “There and Back Again”) in the enviable point of purchase (POP) cases by the cash registers in my local Target store the other day. The occasion of this second grasp for the brass ring of commerce—the first, of course, being the film’s original cinematic release back in December 2012—prompted me to contemplate the director’s underlying motivations when he decided to take up once again his role as official filmmaker of the Middle Earth.

Certainly, with the Lord of the Rings films, Jackson had proven himself to be both ardent and adept at bringing Tolkien’s quasi-Wagnerian recastings of epics northern, Norse, and Teutonic to the big screen. From the opening sequences of The Fellowship of the Ring to the closing frames of The Return of the King, Jackson displayed extraordinary fidelity to the original texts—a decade on, for example, I cannot recall a single critique of the films that recounts the omission of any essential narrative points in the stories. Indeed, the so-called “director’s cut” editions of the films in the so-called “special extended” DVD repackagings of the Tolkien opus were received by devotees with cheers. Quoth the Bard—no, not that one—the only thing better than a 160-minute film is one 200 minutes long.

However, some critics of The Hobbit noted when it first opened at the end of 2012, that Jackson had gone too far in his treatment of the book. The story had been altered, most notably with the addition of huge pieces of back story to add heft to the narrative. Battles between orcs and dwarves, for example, that had in the original novel merited only a line or two of text had been drawn out into lengthy bits of CGI wizardry that matched nothing so much as the tremendous battle scenes that had graced The Lord of the Rings. And where Tolkien the novelist had been content to work simply with the native hostility shared by orcs and dwarves and elves, The Hobbit: An Unexpected Journey had made their hostility, as they say in Hollywood, “personal.” Thorin Oakenshield, the dwarf leader, may have hated orcs (and elves, for that matter) as a matter of course, but in the film, revenge, taking the form of an orc king with really bad teeth, became a subtext that never existed in the novel, changing the conflict into something far meatier and heavier.

Now, as a folklorist, I tend to make a fetish of genres, the narrative forms nurtured and sustained by our ancestors and their great-great grandparents before them both to shape the stories they had to tell and to highlight the lessons buried therein. The ballad, for example, as a genre is a lyrical song with a moral. A knock-knock joke is—well—a knock-knock joke. All of these genres, all of these forms were honed by generations of performers working to engage their audiences gig after gig, generation after generation.

Curiously, at a time when the primal cry from university journalism schools to radio documentary workshops is “Everyone has a story to tell,” we are increasingly losing sense of how important the traditional structure of genre is to the act of communication we call storytelling. Genre expectations and narrative form not only helped the storytellers of previous generations to compose their stories, they also prepared the audience to know what to listen for. My contention is that in our general failure to appreciate genre we often distort the thrust of the tale. 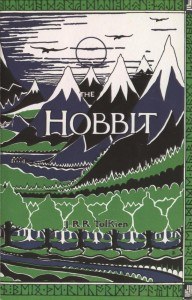 Consider, for example, the venerable narrative genre known as the epic. Nowadays, the word is often used as a measure of scale—to wit: “Dude! It was epic!”—with no regard as to whether the circumstance involved a skateboard trick or a fantastic guitar solo. But the epic as a form of storytelling is probably older than civilization itself. Think Ulysses in The Iliad; think Beowulf. Such narratives, centuries and millennia old, provided the foundation stones upon which Western culture was built.

What else is there to say? Dude, the epic genre is that huge.

And it is here, in his failure to appreciate the genres of Tolkien’s storytelling, that Jackson began to veer off course in his Hobbit trilogy. J. R. R. Tolkien was conscious of genre, narrative thrust, and the startling way in which the choice of the narrative form contributed to the ways in which his stories revealed themselves. A professor in Anglo-Saxon, Tolkien is also described in his Wikipedia entry as a “writer, poet, and philologist.”

Among Tolkien’s fields of expertise: Nordic and Teutonic mythologies, the lore of these peoples, and the role certain genres play in establishing and relating the customs, beliefs, and practices of their communities and societies in the time before written history. The challenge is that Tolkien drew creative inspiration as a novelist from his academic studies, so the boundaries that separate his novels from his academic pursuits were always going to be—to say the least—blurred.

Viewed in this light, The Lord of the Rings was always intended to be mythic in tone and timbre. The origins of myth predate the consciousness of the living by thousands of years, but at its heart the purpose of the myth has always been to explain how the world came be as it is now. The myth of Beowulf explains how Christianity took root among the Danes and the Saxons, for example. The myth underlying The Iliad was to explain how the gods managed to purge the ancient world of Zeus’s many off-spring, the demi-gods, in one fell swoop.

In the case of the Tolkien Ring trilogy, the question was likewise deceptively simple: How was the evil of Sauron rid from the Middle Earth, and what did that signify for the races and nations that survived him?

In order to address such huge questions, Tolkien drew inspiration from the tradition of storytelling that had preserved the remembrance of the siege of Troy for centuries even among preliterate societies of Ancient Greece—namely, the epic. As practiced in that tradition, the epic was a highly ritualized, highly formulaic performance piece presented by an artist to an audience of countrymen and women who already knew who was going to live, who was going to die, and (most importantly) how the story was going to end.

Let me restate and rephrase that: in the realm of the myth and the realm of the epic, there can never be surprise endings. And no wonder: the whole purpose of the story in both cases is to explain how the world as we know it came to be. Hector, in other words, is never going to come out of Troy alive. The Serbs are always going to lose the Battle of Kosovo, no matter how many times they tell the story. And now, as we know, with the demise of Sauron modern man knew neither dwarf nor elf because they had departed for worlds of their own long ago.

Thus, the dichotomy of foreshadowing in the epic arts: on the one hand, we already know how the story is going to end—on the mythic scale, just look at the world around you. What foreshadowing in the epic allows us, curiously enough, is the pursuit of an alternative causal path that nevertheless leads us eventually to engage with the world as we know it. In sum, never mind the dichotomy: we already know how the story ends.

And so it is that we must compare and contrast Peter Jackson’s methods in the making of his two Tolkien film cycles. His approach to The Lord of the Rings trilogy, by Goldilocks’s reckonings was “just right.” But when he entered into filming The Hobbit, Jackson, it seems, decided to abandon Tolkien’s form for something else. Given the economics of the film industry, Jackson’s choice to pursue The Lord of the Rings model in filming The Hobbit was, in so many ways, the right one. His actors will be well paid, his investors will earn handsome returns on their investments, and audiences will spend nine more hours at the cineplex than they might have otherwise intended.

All well and good—a win/win/win, some might say—but obviously gone from the first installment of Jackson’s apparent Hobbit trilogy are those traits that made the Tolkien novel such a charming thing to read. For example, where is the novel’s omnipresent, first-person narrator? The one who describes Bilbo Baggins’s discomfort at leaving his oh-so-very-comfortable home and doesn’t make the character seem like a kvetch?

And therein lies the cinematic dilemma: the curse of the voice-over. Jackson jettisoned the storyteller in his retelling of The Hobbit because, usually, when a film incorporates a voice-over, the duty of the unseen narrator typically is to iron out wrinkles in the story that could not be smoothed out on the editor’s table.

But so much of the charm of The Hobbit is in the narrator’s comments and asides. For example, “This was Thorin’s style. He was an important dwarf. If he had been allowed, he probably would have gone like this until he was of out of breath, without telling any one there anything that was not known already.” Without actually saying it, Tolkien tells us what we have already suspected: Thorin is a self-important blowhard.

No character in the film version is capable of making such a wry observation. What the Jackson interpretation provides via eye-filling action is lost with the abandonment of the kind of disinterested yet profoundly opinionated and all-knowing narrator who can be found in such transgenerational masterpieces as The Wind in the Willows and Treasure Island.

Still, Tolkien managed to imbue The Hobbit with certain characteristics of “authenticity” that allow the work, even via Jackson’s grandiose retelling, to resonate with movie audiences. When Tolkien set out to write The Hobbit, he consciously drew upon archetypes and fairy tale figures—the riddle contest between Bilbo and Gollum is but one example, and then, of course, there are all those songs—precisely because they offered the comfort of the familiar.

In that sense, The Hobbit was intended to be a wonder tale, an intimate and often amusing account of how Bilbo Baggins went to the dragon’s lair and came back again. In his film adaptation, Peter Jackson abandons the intimate scale of the wonder tale and mistakenly blows it up to mythic proportions.

Fortunately, we always will have the book itself to remind us of the charming enchantment Tolkien could cast upon his readers.