In some ways, Jonathan Jones’s narrative structure works against his strengths. He is an energetic and engaging writer and excels at what art historians call “close looking,” where he guides the reader line by line, brush stroke by brush stroke, through a work of art.

The Lost Battles: Leonardo, Michelangelo, and the Artistic Duel that Defined the Renaissance by Jonathan Jones. Knopf, 368 pages, $35. 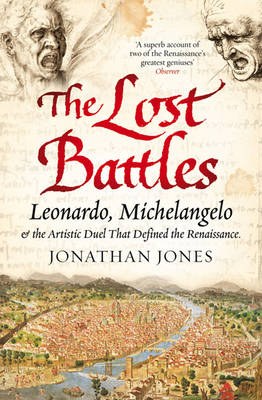 Florence, Italy’s eighth largest city, lies in an urban, industrial agglomeration of 2.5 million people, tens of thousands of them illegal Chinese immigrants laboring in the sweat shops of the Italian fashion industry. (That “Made in Italy” label does not necessarily mean your handbag or tie was actually made by Italians.)

The ornate, white, green, and red facade of the Duomo, Florence’s iconic cathedral, dates from 1876–1887, not the fifteenth century. The picturesque bridges over the Arno are late-twentieth-century recreations. The great works of art that adorn legendary streets, squares, and monuments are mostly copies, the originals having been long ago moved indoors for safe keeping.

An art critic (for the The Guardian newspaper), Jonathan Jones does not break with tradition. In his Lost Battles, Florentine art—more, the entire Italian Renaissance—revolves around the thundering clash of two titans. “The climax of the Italian Renaissance was not reached in a healthy dialogue of great minds,” he writes. “It was the outcome of savage, merciless rivalry.” The “full grandeur of the ‘High Renaissance,” Jones claims, “was a brutal confrontation” between two Florentines: Leonardo and Michelangelo.

That there was some such rivalry, the documented record confirms, though just barely. But was it more than the conflict between any established artist and any rising star of a new generation, now an established trope of art history? Was it the pivot of the entire Renaissance?

Scholars know much more about the artists of the Renaissance than about the artists of any previous period in European history. But that is much less than we would like to know. Most of what we do have is street gossip and shop talk, especially anecdotes collected by the Florentine artist, architect, and historian, Giorgio Vasari in his Lives of the Most Excellent Painters, Sculptors, and Architects. Among other things, Vasari kicked off the heavy bias towards the Renaissance artists of Florence that continues to this day. Art historians generally agree with his aesthetic judgments but assume that some of his narratives, which are often impossible to confirm, are subject to exaggeration.

Like every writer on the Renaissance, Jones leans heavily on those Vasari tales, and he bases part of his Leonardo-Michelangelo dyad on Vasari’s much noted concept of the “modern” age in art, which he believed began with Leonardo and reaches its ultimate genius in Michelangelo. Jones also gives the impression of having scoured every scrap of contemporary documentation that sheds light on Renaissance Florence. Most of this is familiar stuff to anyone who has studied the period.

Where he ventures beyond the familiar is in the sex lives of the artists, both of whom were clearly homosexual but the surviving records, including Vasari, provide few juicy details. In attempting to embellish that famous duality or rivalry, Jones pushes speculation to a fever pitch. Jones fills in yawning gaps with innuendo (just why is Leonardo so generous to his teen-aged houseboy, Salaì?), unreferenced generalities, (“A higher proportion of men in Florence than elsewhere never married”), and with the old journalistic trick of sliding speculation, via repeated use of “must have” where there is no actual documentation, into assumption (“Leonardo must have been deeply impressed by the statue [Michelangelo’s David]. . .” “Michelangelo himself must have been the source of this personal information.”) Throughout, Jones writes with the calm self-assured certainty of the critic rather than with the pedantic caution of a scholar, who might have bracketed such arguments with quasi-legalistic hedging like “suggests,” “most likely,” or “not inconsistent with.”

Jones grounds much of his book on lengthy analysis of the art. For example, he assumes that a series of tortured, highly erotic, male nudes Michelangelo drew in the early sixteenth century are based on young men the artist had seen in public bath houses (“Again it seems this could be a pose Michelangelo has seen in an instant at the baths and got this nude to hold, so he could draw it in colossal detail. . .). But we have little idea what bath houses were like in Renaissance Florence or what Michelangelo might actually have been able to observe there.

In some ways, Jones’s narrative structure works against his strengths. Highly respected as a critic, he is an energetic and engaging writer and excels at what art historians call “close looking,” where he guides the reader line by line, brush stroke by brush stroke, through a work of art. His long descriptions of parts of Leonardo’s notebooks are stunners, a virtual tour of the artist’s mind.

The core of Jones’s book is a famous art historical set piece: two battle scenes from Florentine history that were commissioned for opposite walls of the Great Council Hall in Florence’s “town hall,” the Palazzo Vecchio. These are the “Lost Battles” of Jones’s title. Leonardo was to paint the Battle of Anghiari and Michelangelo the Battle of Cascina. Neither was completed, and Vasari himself later removed (or perhaps covered up) the ruined, though celebrated, remains of Leonardo’s efforts in a later renovation. Both lost works are known through drawings and copies, however, which have been discussed and imitated for centuries.

“In 1504,” Jones writes, “as they plot their rival cartoons for the Great Council Hall, these two titanic minds are systematically competing in every aspect of their designs.” Jones proclaims that Michelangelo “won” the confrontation. In fact, both artists soon drifted away from the unfinished commissions, from Florence and from each other, towards greener cultural fields and rising centers that were soon to eclipse Tuscany in power and prestige. Michelangelo spent the last three decades of his life in Rome, working mostly for Popes, where he died in 1564. Leonardo was lured away first to Milan and later to the court of Francis I of France, after that monarch had defeated Milan’s rulers.

North of Renaissance Florence, the city of Mantua was once an art center to rival any in Italy. Although Mantua produced no great artists of its own, its ruling family, the Gonzagas, amassed a vast collection of masterpieces over six generations, ranging from Roman artifacts to Caravaggio and Peter Paul Rubens, court painter to Mantua’s Duke Vincenzo II. At its peak, the dukes of Mantua owned over 2,000 paintings and 20,000 bronze and marble sculptures, medals, coins, ceramics, manuscripts, rare books, and other precious objects. Yet today Mantua gets only a fraction of the tourists that flock to Florence every year.

Why? The art is long gone. The walls of Mantua’s splendid palaces, including Guilio Romano’s magnificent Palazzo Te, are empty or graced by minor works. In the early years of the seventeenth century the cream of the Gonzaga collection was sold off to England’s King Charles I. When Charles was overthrown and later beheaded in 1649, that part of the collection was dispersed. Invading imperial troops from the north finished off the rest when they sacked and thoroughly looted the Ducal Palaces in 1630. Mantua never recovered nor was its art ever returned. In 2002, the New York Times noted that “[i]t is difficult to go to any of the world’s great public galleries without encountering a picture that once formed part of the Gonzaga collection in Mantua. . . .”

Mantua’s fate reminds us that an awful lot was going on during the Renaissance besides art. The Turks destroyed the last remnants of the Roman Empire. A scientific revolution and the discovery of a “New World” demolished ideas of the nature of the cosmos that had persisted since the ancient Greeks. Spain threw Muslims and Jews off the Iberian Peninsula and launched a massive invasion of the Americas. The Austrian Hapsburgs, English Tudors, French House of Valois, and the Catholic Church all clashed over the acquisition of worldly empires while Italian princelings and city states tried to assert status and territories of their own. Ultimately, the Italians failed.

The role the artists were supposed to play in the global drama of the Renaissance, even the greatest artists like Leonardo and Michelangelo, was to decorate splendid platforms on which rich men, city fathers, religious reformers, dukes, princelings, kings, emperors, popes, and those who aspired to be them could prance, preen, and look like contenders to their peers. Today they are all in the ash heaps of history. Only the art survives.