Unlike fellow apostate (and friend) Herman Melville, Nathaniel Hawthorne didn’t have the chutzpah to be a proto-existentialist—for him, it was better to cling to questionable moral pieties than plummet into sheer nothingness. 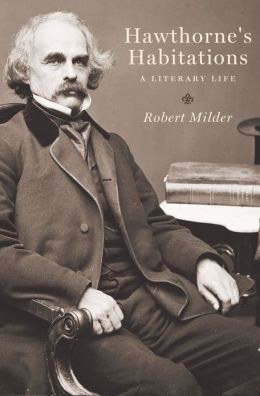 Nathaniel Hawthorne remains an American classic, but his cultural conservatism sticks in the craw of many contemporary readers and critics. The writer’s ultra-cautious views on marriage, sex, and progressive causes strike many as retrograde, his notion of permanent sin, passed like a masochistic metaphysical baton through the generations, dismissed as superstitious guff. Of course, conservative critics find Hawthorne’s rejection of the high-flying idealism of Ralph Waldo Emerson and the feminism of Margaret Fuller to be refreshing assertions of the hallowed tried-and-true. Dissenting critics manage to discover subtexts of chic enlightenment wafting through The Scarlet Letter, Twice-Told Tales, and other major texts. Each side celebrates the Hawthorne they can live with.

Billed by OUP as “the first biographical study of Hawthorne’s works to be published in forty years,” Hawthorne’s Habitations brings a provocative line of attack to the ideological stalemate, not by bridging the oppositions but explaining their existence. For Robert Milder, a professor of English at Washington University in St. Louis, Hawthorne’s restlessly split consciousness is what makes him modern. Deep down the writer is an agnostic: Hawthorne’s best fiction reflects his suspicion of a godless universe and rebels against tradition by flirting with notions of social/religious reform. But Hawthorne ends up retreating, embracing conventional beliefs because he fears the chaos of anarchy. “It is no great leap from Hawthorne’s mid-Victorian ‘absurd’ to Albert Camus’s modernist one,” Milder argues, “each arises from the gap between what Camus calls “the human need and the unreasonable silence of the world.” Though neither Hawthorne nor his friend Herman Melville had much use for Emerson’s smiley Transcendentalism, the former didn’t have the latter’s proto-existentialist chutzpah. For Hawthorne, it was better to cling to questionable moral pieties than posit meaning in the face of apparent nothingness.

Given the evidence from his notebooks, however, Hawthorne’s ironic sensibility yearned to escape the smug certitude of bourgeois values. Milder charts how his short stories and his novels display a bedeviled ambivalence toward the status quo. He couldn’t live with the latter’s hollow strictures, but he couldn’t imagine an ordered life without them, so his imagination only toys with fantasies of his characters breaking free of restrictions. His novels and stories hold “out the promise of the transformative only in the end of demonize it.”

In The Scarlet Letter, Hawthorne is fascinated by the possibility of sexual freedom, a dream memorably shown in Hester Prynne’s disdain for society’s condemnation of her affair and love child. Yet because of the writer’s deep discomfort with female sexuality, he bottles up what he saw as her amoral desire for rebellion. “If The Scarlet Letter inclines towards control of instinct, an internalized form of confinement,” Milder argues, “it is not because Hawthorne is a conservative by positive conviction but because he felt that any structure was preferable to none at all. He was a skeptic, the uneasy bedfellow of the conservative, but a skeptic graced or plagued with the yearnings of a romantic.” The relationship among skeptic, conservative, and romantic is not as politically neat as Milder suggests, but he makes an enticing case that Hawthorne was, at heart, a gifted realist, his dedication to romances rooted in his need to posit an “unredeemable sin” that shuts down hopes for human liberation. For Milder, Hawthorne experiments with realism and progressive ideas, “only to be drawn back to romance by something like a failure of aesthetic or philosophical nerve.”

Milder’s exploration of the author’s intellectual schizophrenia is intriguing, but his ham-fisted assertion of Hawthorne’s failure of nerve limits his argument. Why not see Hawthorne’s uncertainty as courageous, an honest way of exploring conflicts that he and many others of the time could not resolve? Would Hawthorne have been a better writer had he been a pseudo liberal who sets Hester and Dimmesdale free to be themselves, instead of a fake conservative who has her pin the letter back on after her lover dies from guilt? Despite Milder’s expectations, Hawthorne was like most of us—he was not cut out to be a Nietzschean superman, an American Ibsen.

As a critic, Milder is pretty ordinary, in that he applies a diagnostic formula to literature, dutifully going through each of Hawthorne’s major short stories and novels to discern a pattern of idealistic temptation and pragmatic withdrawal (aside from “The Artist of the Beautiful”). There is precious little here detailing Hawthorne’s skills as a writer, whether it be crafting characters or working with language. At one point Milder asks, “Hawthorne the artist is creating drama from ideas, yet can a writer so thoroughly detach himself from his typical opinions as to elicit sympathy for what he privately condemns, antipathy for what he professedly believes? ” The answer is yes—that is just what negative capability and the literary imagination is all about. George Bernard Shaw advised conscientious dramatists to hand the best lines to their villains. Perhaps that is what Hawthorne thought he was doing, crafting theatrical stand-offs in which each side is given considerable persuasive power.

Finally, Milder has a disheartening habit of ticking off a laundry list in each chapter of what other contemporary critics have said about the Hawthorne work under discussion. Worse, he turns to Freud (a pretty well discredited guide to understanding human sexuality) when it comes to examining Hawthorne’s deep anxiety regarding unbounded female desire. Milder does a convincing job of showing how Hawthorne’s fear of female eroticism contorted his fiction. (“Because sex was seldom merely sex for him but was entwined with ideals of women’s etherial nature,” writes Milder, “to make light of purity . . . was to call into question the reality of the moral order and therefore of the spiritual order.”) But his approach raises pesky chicken and egg questions: Was Hawthorne a radical skeptic because of his existential angst? Or because of his primal fear of uncontrolled female sexuality? Milder suggests both scenarios.

Still, Hawthorne’s Habitations draws an incisive portrait of an ever-wavering thinker whose habitual skepticism led to obfuscation in his fiction, making a strong case that Hawthorne repressed his genius as a social analyst in order to preserve—at the cost of his creative vision—his fragile embrace of “a narrow and intense moralism” sustained by a forbidding spirituality. Milder, who co-edited Hawthorne’s notebooks, shows how the writer’s travels in Europe raised threatening questions about his puritanism—could it be “simply a form of provincial philistinism with nothing sacred about it at all?” The critic is particularly adept at dissecting how Hawthorne’s personal writings and marriage illuminate the strengths and weaknesses of his cultural criticism as well as the zigzags of his contradictory personality (Hawthorne—guiltily and wryly—enjoyed the full-bodied materialism he condemned).

Out of the notes generated by his years in England (1853–1857) as U.S. consul in Liverpool, Hawthorne crafted Our Old Home, which Milder believes to be “a quiet masterpiece.” In that book, the writer’s mask of certainty dropped at the sight of horrific English poverty: “Unless your faith be deep rooted and of the most vigorous growth, it is the safer way not to turn aside into this region so suggestive of miserable doubt.” Hawthorne’s curse and blessing is that he couldn’t stop himself from scratching away at his tenuous convictions of a tough, if ultimately reassuring, moral order. Hawthorne’s Habitations‘s creates intellectual drama out of the writer’s (too?) quiet desperation.