You are here: Home / Books / Book Review: The Wonderful and Silly Adventures of “The 100-Year-Old Man Who Climbed Out The Window and Disappeared”

Touted in author Jonas Jonasson’s native Sweden as the perfect antidote to the grim, noir, Swedish trilogy that begins with The Girl With The Dragon Tattoo, this delicious book has sold over over three million copies around the world.

The 100-Year-Old Man Who Climbed Out The Window and Disappeared by Jonas Jonasson. Translated from the Swedish by Rod Bradbury. Hyperion, paperback, $15.99. 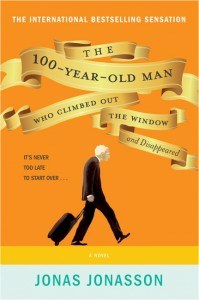 In his famous preface to The Portrait of a Lady, Henry James says that the house of fiction has a million windows, and although you may think you have been done with the picaresque side of the house since you finished the latest translation of Don Quixote, here is a novel so wonderful and silly that you may decide to give this kind of crazy journey another try. Touted in Jonasson’s native Sweden as the perfect antidote to the grim, noir, Swedish trilogy that begins with The Girl With The Dragon Tattoo, this delicious book has had enormous success, selling over three million copies around the world.

It begins when Allan Karlsson realizes in a flash (flash is the operative word because that is how he has done almost everything in his life) that he cannot face his imminent birthday party, so he simply steps out of the window of his first floor room in the Old Folks’ Home in Malmkoping and embarks on an escape that gives new meaning to the idiom “harum-scarum.” Yet you know you will want to find out what happens to this man who is described by his creator in such a breezy yet respectful way:

“He was not a fashion plate; people rarely are at that age. He was on the run from his own birthday party, another unusual thing for a 100-year-old, not least because even being 100 is pretty rare.”

Allan thought about whether he should make the effort to crawl back in through the window to get his hat and shoes, but when he felt his wallet in his inside pocket, he decided that it would suffice. Besides, Director Alice had repeatedly shown that she had a sixth sense (wherever he hid his vodka, she found it), and she might be nosing around in there even now, suspicious that something fishy was going on.

Better to be on his way while he could, Allan thought. . .

So he gets himself to the bus station where he is soon watching the suitcase of a young man who has to use the bathroom. And before we know it, Allan has boarded the bus with the suitcase, and his adventure begins.

It is useless to try to describe this story because there are so many characters and so many intersections with the famous people of the twentieth century. All you need to know is that as a child Allan loved explosives and blowing up things, and you have a hint to where his talents will have taken him. In real time—2005—we have the story of Allan’s escape, the thieves he encounters and the people who shelter him and them, and the strange twists in their journey through Sweden. Then we have the bumbling bureaucrats who are trying to find him and the equally hilariously bumbling press who are anxiously following his escapades. In these sections of the book, Jonasson presents a picture of modern life that is propelled by opportunism, stupidity, and all the usual human flaws. Yet he does it so tenderly and so apparently artlessly that you are charmed. The prose seems to come from the great fairy tales of his Scandinavian compatriot, Hans Christian Andersen.

And as with all really good picaresque novels—e.g. the Don, Tristram Shandy, Tom Jones—there is also real ballast in this novel. Allan has a gift for finding himself in all extremes—palaces and prisons. By alternating Allan’s biography with the events of 2005, Jonasson has created a virtual history of weaponry in the twentieth century which, although filled with fun, is also daunting in its revelations about the stupidity, deceitfulness, and egomaniacal traits of the main players and the absolute disregard by all these “leaders” and their followers of the beauty and intrinsic value of this beautiful planet. (Like Forrest Gump. Allan turns up where you least expect him, and his intimates include Franco, Truman, Stalin, Mao Tse Tung’s wife, Kim Il Sung, Brezhnev, Nixon, and many others.) Jonasson has done his homework and all the characteristics he assigns these famous people make absolute sense both historically and fictionally. He has also created Herbert Einstein, supposedly a brother of the famous Albert Einstein, and a masterful combination of innocence, as well as a sly satire of the great man.

In one of the more memorable encounters, Allan sings a song by a real Swedish poet who was a Germanophile, which leads to a riff about Stalin and poetry that is buttressed by, though never alludes to, the real facts of Stalin sending some of the great Russian Jewish poets, including Osip Mandelstam, to their deaths. Here is an exchange between the cruel dictator and Allan:

—Is Mr. Karlsson sitting here and insulting the generous host who received him with open arms? asked Stalin.

Allan assured him that such was not the case. If it was Heidenstam who had upset Mr. Stalin, then Allan apologized profusely. Perhaps it might be some consolation that Heidenstam had been dead for some years?

— And “sjung hopp faderallan lallan lej,” what did that actually mean? Did you have Stalin repeat a homage to the enemies of the revolution? asked Stalin who always spoke of himself in the third person when he got angry.

When Allan assures Stalin it is a cheerful ditty, Stalin retorts, “Does Mr. Karlsson think that Stalin looks like a cheerful person?”

You get the idea. When I first started this book, I thought I would begin to skim somewhere along about halfway through. Instead, I found myself reading more and more closely, just because you never knew when a gem might come along. So by the end, I found myself really caring not only for Allan but the others as well. Here they are, on their final flight from Indonesia with false papers:

“The traveling party included the hundred-year-old Allan Karlsson, petty thief Julius Jonsson (now declared innocent), eternal student Benny Ljungberg; his fiancee, the beautiful Gunilla Bjorklund, both of her pets, elephant Sonya and Alsatian dog Buster; Benny Ljungberg’s bother, the newly religious food wholesaler Bosse; the previous so-lonely Chief Inspector Aronsson from Eskilstuna; the former gangster boss Per-Gunnar Gerdin; and his mother, eighty-year-old Rose Marie, she who at one time had written an unfortunate letter to her son while he was incarcerated in the Hall Prison.”

By the end, we are not tired but exhilarated. Both humor and true creativity are alive and well in the twenty-first century.