You are here: Home / Featured / Fuse Commentary: What Does WGBH Do When It Cuts Back On The Arts? It Celebrates, Of Course.

Jazz is dying on WGBH—long live the arts, and let us all eat cake financed by Citizens Bank at the upcoming Summer Arts Weekend, created by WGBH and The Boston Globe. 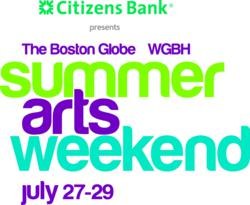 What does a public radio station do when it whittles down its jazz programming to the weekends, removing one host (Steve Schwartz) and making the other (Eric Jackson) part time? Yes, there is the customary public relations mumbo jumbo that protects the damage to the brand. We are told that jazz is being “highlighted” on the weekends. But that isn’t enough.

It has to celebrate, of course. Some of the WGBH execs may be heading off to Disneyland, perhaps making use of the savings garnered by lopping off “Eric in the Evening” and other downsizing measures, undoubtedly helped out by the front office’s recent emasculation of the union. But spiking the ball that way, though satisfying, won’t raise money for the station’s coffers. As I mentioned in my last column on WGBH’s move to get out of the arts and culture business, the aim is to do less about the arts but still garner support from listeners who, the higher ups calculate, won’t really catch onto the scam. It is the old shell game. The idea is to sell an image of involvement while minimizing a very different reality. And, as I said before, WGBH has chutzpah to spare—adding insult to injury could have been predicted.

Thus is born, in the same month jazz goes the way of folk on the airways of WGBH, the first Summer Arts Weekend (July 27–29), created by The Boston Globe and WGBH. The major corporate presenter, at least at the moment, is Citizens Bank. “This free weekend event brings a dynamic variety of arts to a stage in the heart of Boston at Copley Square,” ballyhoos the event’s website. Jazz is dying on WGBH—long live the arts, and let us all eat cake financed by Citizens Bank. It would be informative to ask the musicians performing during the weekend what they think of WGBH cutting its respected jazz programming. Perhaps the hosts of the two-hour talkfest on WGBH or a Boston Globe reporter will care to ask that “good question.”

I assume Eric Jackson and Steve Schwartz’s invitations were lost in the mail, but “local businesses and organizations are invited to the biggest arts celebration in New England.” Perfect, just after the heads roll out of the WGBH building. Buying into the sponsorship opportunities for the events look pricey to me: $75,000 — Platinum Level, $50,000 — Gold Level, $25,000 — Silver Level. Obviously, the weekend could turn out to be a very nice payday for WGBH and The Boston Globe. Accordingly, the latter is playing its own two-faced game. Look concerned but go for the loot. The publication recently ran an editorial charging that by “de-emphasizing jazz, WGBH diminished its soul.” But for the mainstream media advertising revenue is much better for the soul—who cares if the funeral for jazz on WGBH has barely ended? Another “good question” worth asking is how long has the Globe Jazz Festival been gone?

The Summer Arts Weekend line-up has not been finalized as of now, at least on the website. Few New England-based musicians have been selected, while theater and an art (?) presence are promised in the publicity material but nothing has been announced, even though the event is less than a month away. Apparently, street musicians will be bused in . . .

People can judge about the size and success of the event, but to my mind, the one day of classical offerings tends toward the easy listening, while the bluegrass and pop hug the breezy. Jazz, aside from Dixieland, looks undernourished. The event is free: WGBH, The Boston Globe, and Citizens Bank figure the music will draw a crowd, certainly plenty of tourists. Who needs to spend lavishly on headliners?

Of course, there will be “special” performances sans the hoi polloi, offering comfy chances for corporate/broadcaster deal making. Some ticketed events will be available once the sun goes down: an “After Hours Festival Club which will come alive after performances on the Copley Square stage end. These ticketed events will be held at the Fairmont Copley Plaza, bringing together festival artists for short-form intimate performances that will allow for unique collaborations between artists.”

The politicians are on the corporate, up-with-the-arts bandwagon. “From large to small, Boston’s arts organizations play a significant role in defining the identity of the City of Boston and drawing visitors to the city,” said Thomas M. Menino, mayor of Boston. “We applaud The Boston Globe, WGBH, and Citizens Bank for coming together to create Summer Arts Weekend, showcasing the arts to residents and visitors alike.” “Here in Massachusetts, arts and cultural organizations help build vibrant communities and contribute significantly to our economy,” said Governor Deval Patrick. “I encourage all lovers of the arts, music and theater to attend the inaugural Summer Arts Weekend in Boston celebration.”

Since the “sponsorship opportunity” listing includes a guarantee of “20,000 web impressions” and upward, the intrepid interns on the WGBH arts magazine and writers at The Boston Globe may be chirping the proceedings up big time on the web.

WGBH figures that quality broadcasting, musical education, and “vibrant communities” won’t be missed. Not when money-raising circuses can so easily be pitched to take their place. Who needs jazz on the weekdays? For a magical weekend each summer—courtesy of public radio, The Boston Globe, and corporate sponsors who didn’t believe they got enough bang for their buck on “Eric in the Evening” and other now extinct music shows on WGBH—we will have arts lite.

My modest proposal is that those who care about jazz and the arts should bring placards and hand-outs to the Summer Arts Weekend to let people know that the real arts have left the WGBH building.