You are here: Home / Featured / Opera Review: ‘Tales of Hoffmann’ 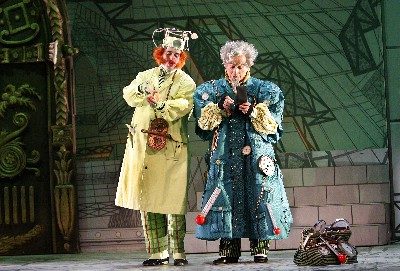 One of history’s most famous and beloved French operas wasn’t written by a native Frenchman. “The Tales of Hoffmann” came from the pen of Jacques Offenbach (1819-80), born in Cologne as Jacob Eberst, the son of a Jewish cantor. As a youth he moved to Paris, converted to Catholicism at 25, became a virtuoso cellist and turned out a long series of comic operas and operettas.

At the end of his career he undertook his one serious opera, “The Tales of Hoffmann,” racing against the clock of mortality. He managed to complete all the music, but orchestrated only the first act. It was left to Ernest Guiraud (who composed the recitatives for Bizet’s “Carmen”) to finish the orchestration and to decide to transfer the most celebrated number, the “Barcarolle” in Act 3, from Offenbach’s earlier “The Rhine Mermaids” (1864).

The order of the three acts (framed by a prologue and epilogue) varies from production to production, but the current mounting by the Boston Lyric Opera (Nov. 7-18, Shubert Theatre) – a co-production with Opera Theatre of St. Louis and Opera Colorado – preserves Offenbach’s intended sequence.

The libretto by Jules Barbier was offered to Charles Gounod (composer of “Faust”) and others, but wound up being accepted by Offenbach. Barbier drew on four fantastic tales by E.T.A. Hoffmann (1776-1822), a gifted storyteller and passable composer. And in fact Hoffmann himself is at the center of the plot.

Hoffmann is smitten by Stella, a singer who is performing in Mozart’s “Don Giovanni.” Drinking too much in the tavern next door, he is induced by the assemblage to recount his three major affairs of the heart. First there is the hoop-skirted Olympia, who turns out to be a wind-up doll. There follows the singer Antonia, a consumptive who overtaxes herself and dies. And then we have the rich Venetian courtesan Giulietta, who eventually runs off with someone else.

The style of writing is different for all these women. Olympia is a coloratura role, while Antonia calls for a dramatic soprano and Giulietta for something in between. The work has over the years posed a challenge for producers to find a soprano who can sing all the heroines. The yardstick is the late Beverly Sills, who between 1964 and 1972 sang the roles more than fifty times, including Sarah Caldwell’s Opera Company of Boston production in March of 1965. There is a recording of her 1964 New Orleans live performance, but the preferred version is her London studio recording of 1972, conducted by Julius Rudel. 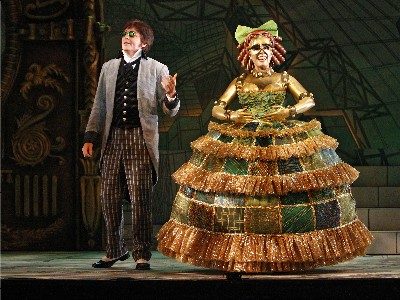 The Boston Lyric Opera managed to come up with Georgia Jarman (a 1997 graduate of Boston University), who really pulls off this feat quite marvelously. As Olympia she captures the staccato writing with its high E-flat, and as Antonia beautifully conveys the turtledove song (with its harp accompaniment). Likewise, baritone Gaétan Laperrière is entrusted with the four villains – Lindorf, Coppélius, Dr. Miracle, and Dapertutto. His voice is at times a bit underpowered, but overall he is admirable.

As Hoffmann, Gerard Powers is a ringing tenor, at his best in the upper range (going as high as D-flat). His drunken staggering is perhaps a little overdone, but he provides a solid center to a drama that leaves Hoffmann repeatedly defeated. A bronze-faced Michele Losier, doubling as The Muse and Hoffmann’s sidekick Nicklausse, exhibits a luscious mezzo-soprano voice. There is fine work by Ulysses Thomas as the innkeeper and Antonia’s father, and by Matthew DiBattista as the hard-of-hearing servant Frantz and Giulietta’s lover. The chorus sings lustily where called for.

Highly imaginative is the team of Renaud Doucet (director/choreographer) and André Barbe (set & costume designer). There are always fascinating things to look at. At one point openings in the wall allow five persons to conduct with battery-lit batons. In Venice a group of rolling stairs metamorphose into gliding gondolas. Giulietta’s long gown has a huge encircling silver python that suggests her ensnaring ways.

On loan from the Boston Pops, Keith Lockhart leads his 49-piece orchestra confidently and tidily. The Boston Lyric Opera has begun its season with a true winner. Next up: Dvorak’s fairy-tale opera “Rusalka” (1900), running March 20-31.